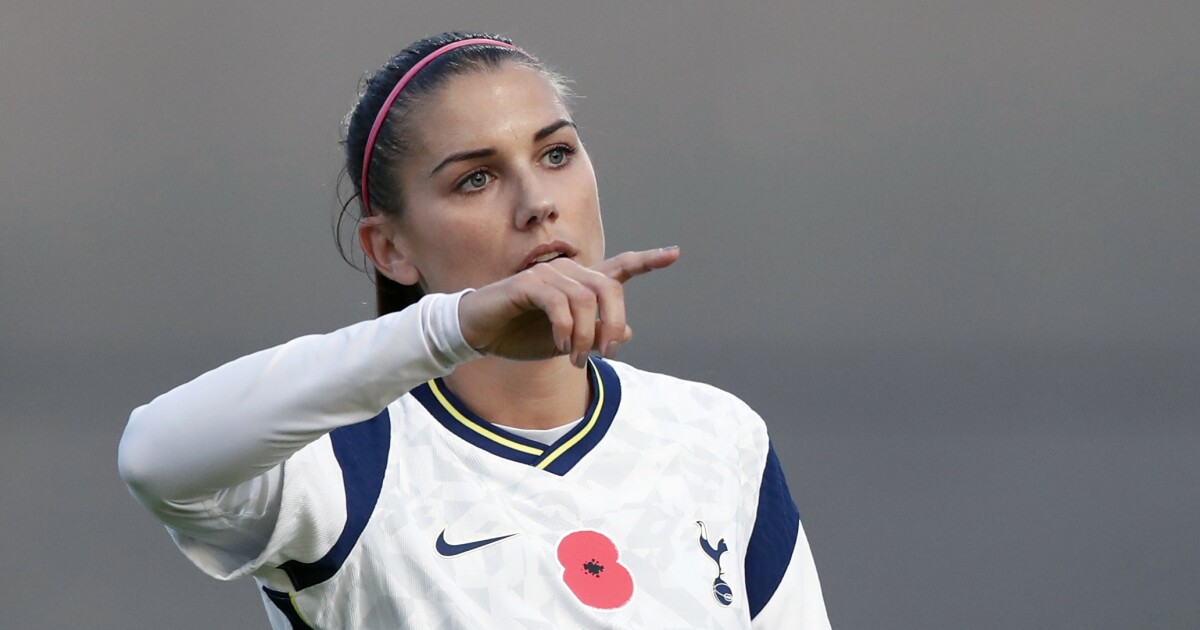 The last nine months have been a whirlwind for Alex Morgan.

The national team captain gave birth to her first child in May, scored twice in a five-game stint with Tottenham of the England Women’s Super League in the fall, then contracted COVID-19 when she returned to the U.S. for the holidays.

“My whole family got it,” Morgan said Thursday during a teleconference from the national team’s training base in Orlando, Fla. “We were together 10, 12, 14 days just recovering. Sleeping as much as we could. I was fighting off a little bit of a fever for quite a few days.

“But as I got back and kind of took the right steps to get my body back into shape, I started feeling really good after three weeks or so.”

Now comes the challenge of preparing for next week’s SheBelieves Cup, a four-team tournament that serves as the first tune-up for this summer’s Tokyo Olympics. And Morgan has work to do to get ready, having played just 330 minutes for club and country since winning a second straight Women’s World Cup title in the summer of 2019.

But with the coronavirus upending soccer schedules all over the world, Morgan isn’t the only one struggling to regain form.

“When I look at the break I’ve had, it’s been kind of an interesting one because it’s been a really inconsistent one. I think everyone has had that,” she said. “I don’t feel like I’m that different than a lot of my teammates because of the pandemic and just people getting COVID, people getting injuries, not having a place to play for quite a few months.

“If there is a silver lining in this it’s that all of our bodies could have probably used a break that we would never have gotten [otherwise].”

When Morgan, 31, took her maternity leave after the World Cup, she planned to return for the Olympics, scheduled to open about 10 weeks after she and husband Servando Carrasco, a former Galaxy midfielder, welcomed daughter Charlie in May. She admits now that timeline was too tight.

“It would have been an incredible challenge,” she said. “But I knew that, honestly, some of it really wasn’t up to me. It was up to how my body was going to recover. Not having to go through that and being able to elongate my recovering is very helpful.”

Yet with COVID still raging, there’s no guarantee the Games — or any other competition — will go forward this year either, uncertainty that Morgan says is expected.

“I never would have imagined that you would just be told that you’re not playing a game the next day and be like ‘OK.’ But that’s literally the mindset you have to take now.”

Motherhood has forced Morgan to adapt in other ways. Even training sessions, she says, are no longer just about her, and that’s a change she’s happy with.

“When we have an afternoon gap between trainings or whatever, it’s not like ‘Oh let me lay down and watch TV and take a nap.’ It’s like, I’m hanging out with Charlie. I’m on her schedule and I absolutely love it.”