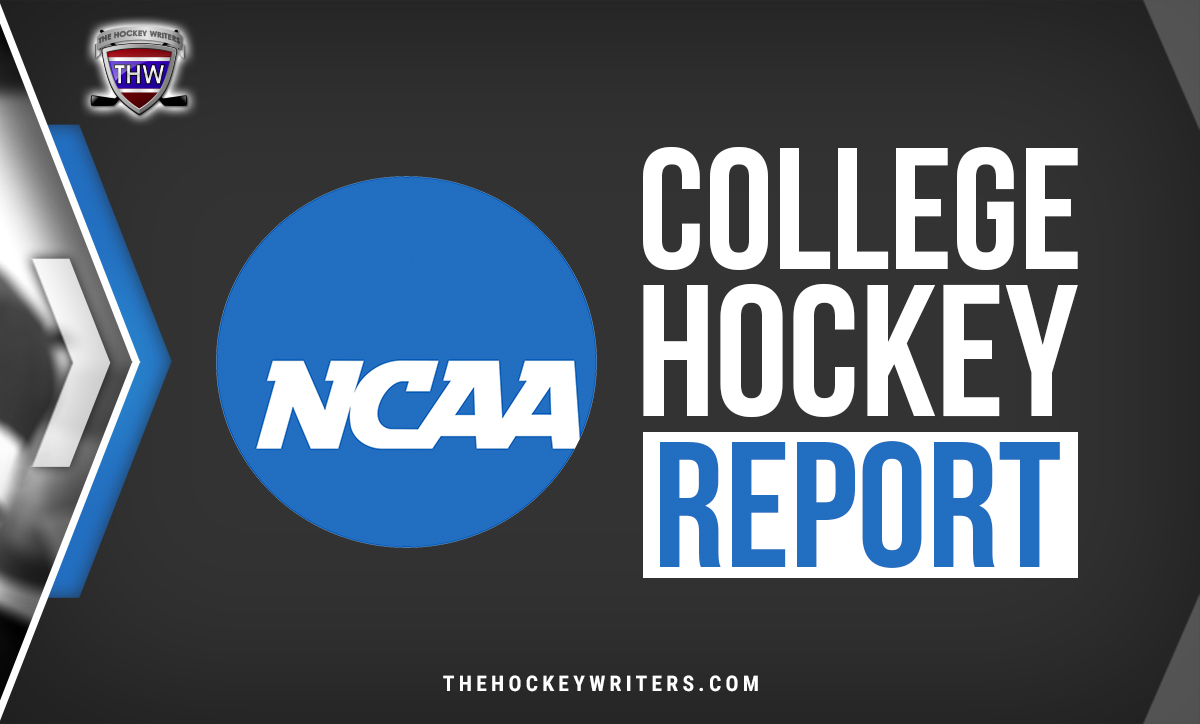 Every hockey fan has their own way they like to see games play out. Some like tight battles that go down to the wire, while some like the high-scoring offensive onslaughts. Last week in college, there was plenty of both. Over the past week, we saw teams blow their opponents out of the water, while there were some games that went back-and-forth.

This included a pair of games between the Notre Dame Fighting Irish and the Penn State Nittany Lions that needed more than the regulated 60 minutes.

The two teams came into the weekend heading in slightly different directions. After the Fighting Irish swept Minnesota two weeks ago, they were embarrassed on home ice by the Michigan Wolverines. For the Nittany Lions, they were feeling good as they won their last four games.

The goaltenders stole the show in the first games of the weekend, as Notre Dame’s Dylan St. Cyr and Penn State’s Oskar Autio shined. Autio stopped 31 of the 32 shots he faced, while St. Cyr looked good, making 34 saves.

The goals in regulation were scored by the Irish’s Alex Steeves and Nittany Lions’ Clayton Phillips. Then, in overtime, Alex Limoges scored his ninth goal of the season to give the Nittany Lions the win.

It was Limoges’ second OT goal of the season, as he scored the winner against Michigan State on Jan. 15. It was also his 50th career goal.

The Fighting Irish returned the favor the following night. After Tyler Gratton scored to put Penn State out in front, Steeves and the Nittany Lions’ Sam Sternschein traded goals.

The Irish needed a Colin Theisen goal in the third period to tie the game. Once again, free was to be played. In the final minute of overtime, Spencer Stastney scored his third goal of the season to help the Irish split the weekend with the Nittany Lions.

St. Cyr was solid in goal once again for Notre Dame, making 33 saves, earning his fourth win of the season.

Despite the Northern Michigan Wildcats scoring first, that’s all they got against their Upper Peninsula rivals. Four unanswered goals gave the Michigan Tech Huskies their eighth win of the season. Alex Broetzman led the Huskies with a goal and two assists, with Blake Pietila playing well in goal, making 32 saves, picking up his sixth win of the season.

It was the Sacred Heart Pioneer’s first game in 20 days, and it did not quite go to plan, even though they jumped out in front. From there on, it was all AIC. Eight Yellow Jackets had multi-point games, including Eric Otto, who put up a goal and two assists. Chris Dodero scored a goal and an assist in the win, giving him 11 points now on the season.

You talk about a long layoff for Sacred Heart, the Bentley Falcons last game was Dec. 19, 2020. Yet, any rust they had was worn off when the Falcons went up 2-0 on the Holy Cross Crusaders in the first period. Jakov Novak led the charge with a pair of goals, with Luke Santerno helping out in a big way, registering three assists in the victory.

The RIT Tigers faced off against the Mercyhurst Lakers in a barn-burner. After the Lakers led 2-1 after 20 minutes, the teams combined for five goals in the second period, three of which coming from RIT, with two being scored by Will Calverley. He added another in the opening minute of the third, giving him his second hat trick of the season, followed by a tally from Jake Hamacher to give the Tigers their fifth win of the season. Hamacher added an assist in the game, giving him, along with Dan Willett, a two-point night.

It was not easy for the Army Black Knights to knock off the Pioneers, as they trailed 1-0 after the first period. Thankfully, goals from leading-scorer Colin Bilek and John Zimmerman helped push Black Knights to their sixth win of the season. Trevin Kozlowski had a relatively easy night in net for Army, only having to make 17 saves in the win.

The AIC Yellow Jackets continue to roll this season, having an easy night against Holy Cross, outshooting the Crusaders 41-20. Chris Dodero found the back of the net twice, with Justin Cole also scoring a goal and an assist for the Yellow Jackets. Chris Theodore picked up two assists in the game and is now tied for the team lead in scoring with 16 points, with Tobias Fladeby.

The Minnesota Golden Gophers offense is alive and well after going cold two weeks ago against Notre Dame. Make it now 25 goals in the last three games for the Gophers after their win over the Ohio State Buckeyes. Blake McLaughlin and Sammy Walker continue their hot streaks, scoring a goal and two assists each for Minnesota. Sampo Ranta also had a two-point night, potting a goal and an assist.

An excellent first period helped send the Wisconsin Badgers to the win over the Michigan State Spartans on Friday night. The Badgers scored three times in the opening 20 minutes, with brothers Cole and Brock Caufield each picking up a goal. Cole scored another in the second period and assisting on another. Dylan Holloway led Wisconsin with two goals and two assists, helping the Badgers to their 10th win of the season.

The UConn Huskies proved to be too much for the Merrimack Warriors. Two goals in the first period, and three in the second, helped UConn improve to .500 on the season. Rees Harrison and Carter Turnbull each found the back of the net twice for UConn, with six total Huskies picking up at least two points.

In a battle of the Masses (get it?), it was the Minutemen who routed the River Hawks on Friday night. The offense was led by Hockey East’s leading-scorer, Bobby Trivigno. The junior potted two goals and picked up an assist in the win, including being credited with the game-winning goal.

Filip Lindberg had a relatively easy night in goal, stopping 17 shots and earning the seventh shutout of his career, while Matthew Kessel scored his ninth goal of the season, putting second in the conference behind teammate Carson Gicewicz in goals.

The outcome does not fully represent the game that played out between the Providence Friars and New Hampshire Wildcats. The game was tied 1-1 heading into the third period, and the Friars only outshooting the Wildcats 19-15. That was when Providence turned on the after-burners, scoring four times in the final frame. Patrick Moynihan, Parker Ford and Michael Callahan each had two points in the third, with Ford picking up three assists in the win. Greg Printz’s fourth goal of the season was credited as the game-winner.

Despite getting outshot 27-15, the Miami RedHawks hung in there with the Minnesota-Duluth Bulldogs, thanks to the play of their goaltender, Ludvig Persson. However, Persson could not stop them all, as Quinn Olson and Cole Koepke were able to find the back of the net, improving the Bulldogs record to 9-5-2 on the season.

The win was significant as longtime Bulldogs head coach, Scott Sandelin, picked up his 400th win behind the bench.

In a rather chippy affair, the North Dakota Fighting Hawks earned a win in the first of six meetings against the Omaha Mavericks. The Mavericks were in the running, only trailing by one heading into the final 20 minutes. However, Grant Mismash’s ninth of the season put the game out of reach, and the Fighting Hawks pulled away. Shane Pinto had another great game, scoring a goal and an assist. Netminder Adam Scheel picked up win conference-leading win no. 11 after a 30-save performance.

After getting swept for the first time the weekend prior against Bemidji State, the Bowling Green Falcons bounced back to pick up a win against Michigan Tech. The Falcons scored three times in the first period, and a pair in the third to pick up their country-leading 15th win of the season. Connor Ford scored twice and assisted on another, with Brandon Kruse scoring his 10th goal of the season, and adding three assists, giving him a four-point night.

It was another high-scoring affair between the Northern Michigan Wildcats and Ferris State Bulldogs, and for the third time this season, the Wildcats came out on top. This, despite the Bulldogs scoring thrice in the opening frame. AJ Vanderbeck scored his fifth goal against the Bulldogs this season in the win, with leading scorer Joseph Nardi leading the attack with two goals and two assists. The win snapped their eight-game losing streak.

For the fourth game in a row, the Bemidji State Beavers have taken down a top-10 team. Led by Owen Sillinger’s fifth of the season, and a pair of assists from Alex Ierullo, the Beavers earn their sixth win season at the hands of the Mavericks. Zach Driscoll was outstanding again for the Beavers, stopping 35 of the 36 shots he faced.