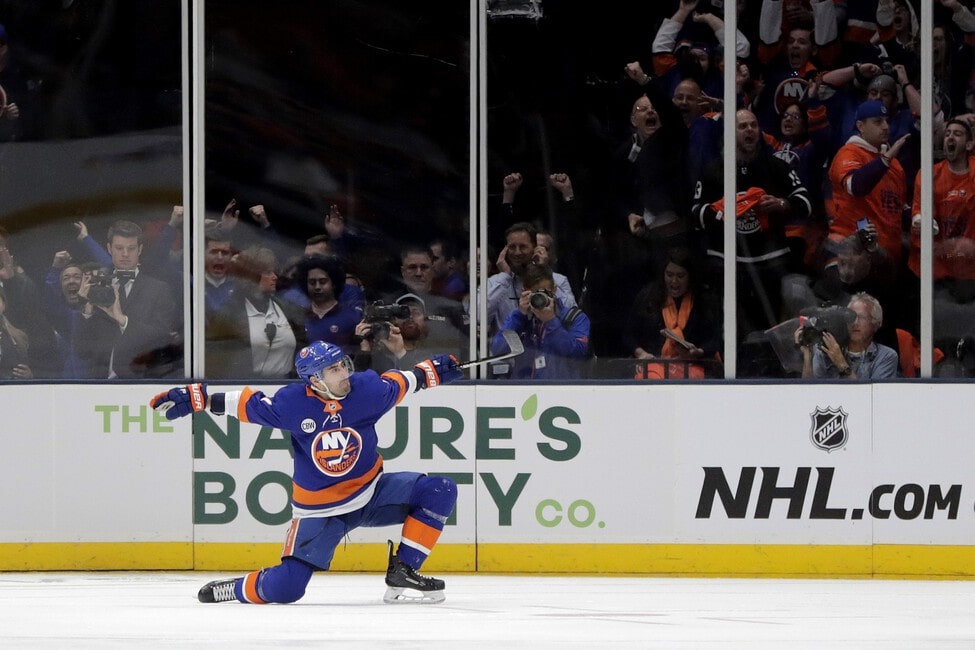 The ’12 Days of Christmas’ is a classic holiday song first published in its current form in 1908. In a nod to the classic carol, join The Hockey Writers as we count down the 12 Days of Hockeymas. Each day, we will provide you with a piece of hockey history as we eagerly await the start of the 2020-21 NHL season.

A hat trick is one of the most exciting moments in hockey. These rare glimpses of offensive greatness bring fans to their feet and rain down hats on to the ice in a massive celebration, so long as the goal scorer is on the home team. In a tradition that dates back more than half a century, fans are on the edge of their seat whenever someone is on the cusp of a hat trick. Today we look back at three memorable Islander hat tricks over the last few seasons.

Anthony Beauvillier has certainly come into his own since joining the Islanders full-time for the 2016-17 season. The 28th overall pick in 2015 has become one of the more consistent forwards for the Islanders and continues to drive the offense with his speed.

During the 2018-19 season, the Islanders faced a new challenge without John Tavares in the lineup, but Beauvillier and company, led by head coach Barry Trotz, put together a heck of a season. Early on, in the midst of a snowstorm, the Islanders met their cross-river-rivals the New York Rangers in an always exciting matchup in Brooklyn. Beauvillier led the way with a hat trick in a barn-burner, 7-5 victory for the Islanders.

2: Eberle’s First With the Islanders

Prior to the 2017-18 season, Jordan Eberle was traded to the Islanders for Ryan Strome, the latter of which struggled on Long Island after being selected 5th overall in the 2011 NHL Draft. Eberle had some success in Edmonton but needed a change of scenery to jump-start his career.

Fast forward a few years and Eberle seems to have fit right in with this cast of Islanders. He’s scored some big goals for the Isles over the years, most recently the game-winner in the second overtime of Game 6 of the Eastern Conference Final in 2020. During the shortened 2019-20 season, Eberle managed 16 goals, three of which came against the Detroit Red Wings less than a month before the league shut down.

The 2017-18 season was an interesting one for the Islanders, and this 7-6 victory against the Red Wings encompasses it quite nicely. A come-from-behind victory with late-game heroics and, of course, a hat trick from Brock Nelson to cap it off in overtime.

“As soon as we got that five-minute call everyone’s energy level kind of jumped up a little bit,” Mathew Barzal said in an interview following the game. “We knew something was going to go. We were fortunate to get a power-play there and we have some guys who can put the puck in the net and they did.”

But the Islanders wouldn’t get away that easy. Mike Green scored with under a minute left to tie the game at six apiece. The game went to overtime, setting Nelson up for some heroics.

“That was a wild one for sure. I’ve never been a part of a game like that,” Nelson said after the game. “It’s kind of hard to describe, but we needed these two points badly.”

It was quite the night for rookie Barzal as well. According to the Islanders PR department, Barzal “became the first NHL Rookie to record three five-point games since 1917-18 (Joe Malone – Montreal). Barzal moved into third place all-time on the Islanders rookie assist list and became the first player this season to record three five-point games.”

The Islanders continue their rise as perennial contenders despite not having any big names outside of Barzal. Their win-by-committee model has proven successful, pushing them within two games of the Stanley Cup Final this past summer. With the 2020-21 season on the horizon, Islander fans are looking forward to the next hat trick after months without hockey.