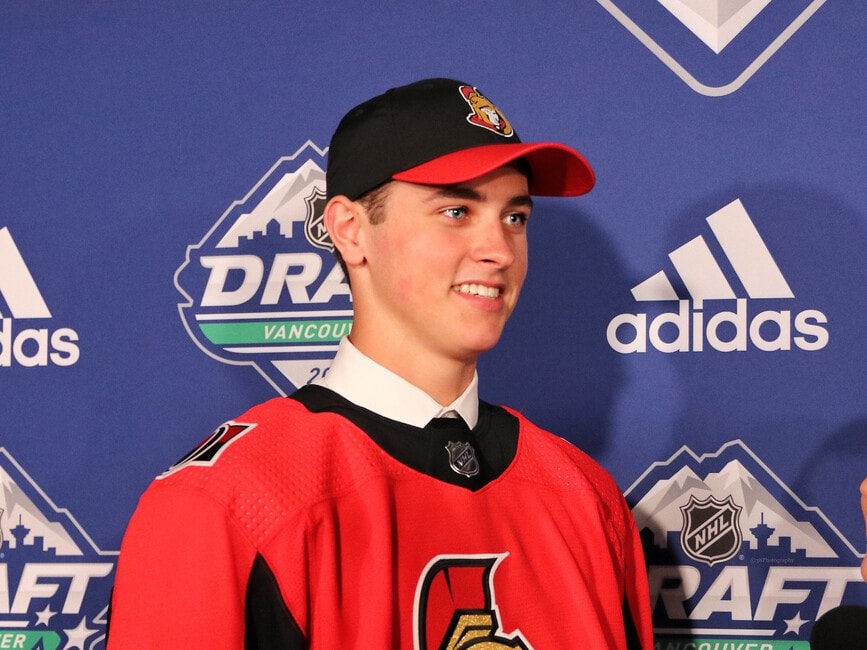 One of the top college programs in the United States picked up another big win last night with the help of an Ottawa Senators’ prospects. Meanwhile, in the United States Hockey League (USHL) a recent Montreal Canadiens draft pick is off to a great start. Sweden continues to have issues with their staff and a 2021 draft hopeful is getting close to making his next move.

The University of North Dakota has gotten their season off to a great start within the NCHC bubble in Omaha, NE. They beat St. Cloud State 4-3, in overtime, last to improve to 5-2-1. Senior captain Jordan Kawaguchi needed just eight seconds of extra time to score the game-winning tally. It was the 101st point of his college career and fifth overtime goal.

Kawaguchi has been on the Fighting Hawks’ top line with Shane Pinto, who is off to a red-hot start. The 2019 second-round (32nd overall) pick of the Senators had a goal and an assist in the victory. He scored his fourth goal of the season, on third on the power play, in the second period.

North Dakota currently has the top-rated power play in the NCHC. Pinto earned his assist by winning the opening draw of overtime, which Kawaguchi quickly deposited into the net. He now has four goals and 12 points in eight games, tied for the most points in all of college hockey. This was his fifth multi-point game of the early season.

The Fighting Hawks’ first line of Kawaguchi, Pinto and Riese Gaber have been getting the job done in Omaha. They have combined for 12 goals and 29 points in their first eight games. They will play Minnesota Duluth on Saturday afternoon.

Rhett Pitlick is off to a good start in his second full USHL season. After being drafted in the fifth round (131st overall) by the Canadiens, he scored 17 goals and 42 points, in 45 games, splitting the 2019-20 season with the Omaha Lancers and Muskegon Lumberjacks.

Pitlick has dealt with some nagging injuries of late, but that doesn’t appear to be an issue anymore based on his goal on Wednesday night. In the third period, he drove the entire length of the ice and split a pair of USNTDP defenders on his way to putting the puck into the back of the net.

The 19-year-old left wing has three goals and six points in seven USHL games for the Lumberjacks this season. He is committed to playing at the University of Minnesota next season.

Team Sweden has had a ton of issues with COVID-19 the past few days and the problems are coming from the adults in the room. They recently had to revamp their entire coaching staff before heading to Edmonton for the 2021 IIHF World Junior Championship due to four coaches testing positive for the virus.

On Wednesday, Sweden had to send equipment manager Jonas Fransson home after violating quarantine rules. Apparently, he left the hotel the team is in isolation at in order to go back to the airport to retrieve some lost luggage. Fransson says he needed the bag because it had the power cord for his breathing machine in it. The rules of leaving the bubble are strict and he is already on his way back to Sweden.

Defenseman Ty Murchison is currently enjoying some early season success. In 17 total games between the U.S. National Team and the USHL, he has three goals and seven points. The next step in his career, apparently, is heading to the NCAA. He has narrowed down his choices to Arizona State, Colorado College and Ohio State.

Murchison, who is eligible for the 2021 NHL Entry Draft, did not make the NHL Central Scouting preseason watch list, but he has been climbing the rankings recently. The consensus feels that he could be a late-round pick, but there is plenty of hockey left to be played in order to move up the board. His development will be in good hands at any of those three programs.