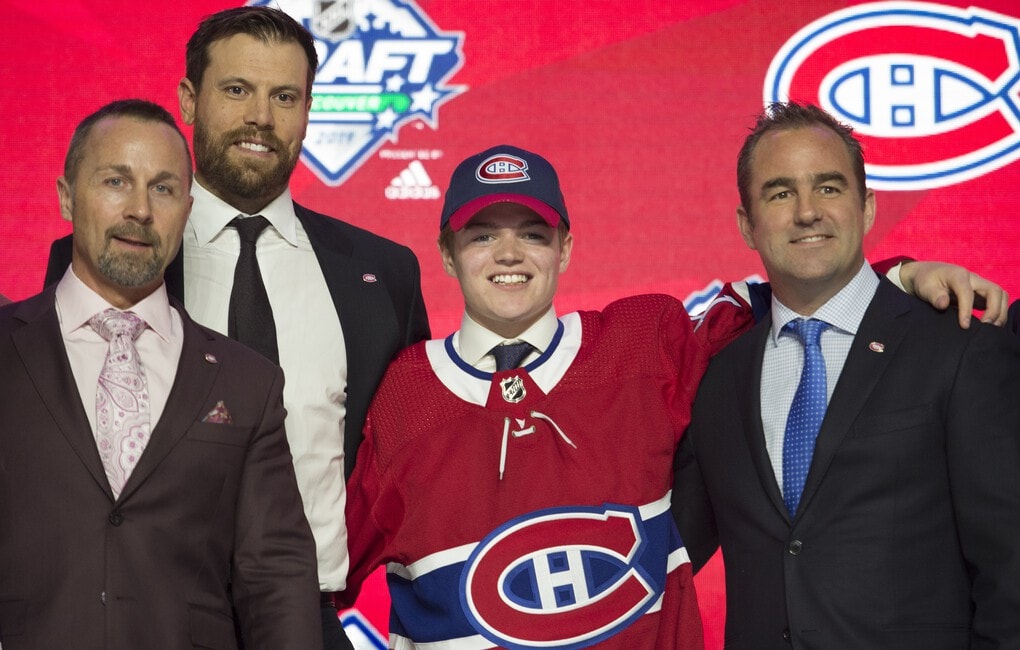 Canadiens prospect Cole Caufield didn’t have a goal in his first four games of the season heading into Monday’s two-game series against Penn State. He ended Tuesday with four. He registered one goal in Wisconsin’s 6-3 victory on Monday and followed that up with his second career NCAA hat trick on Tuesday. Caufield became the first Wisconsin player since Robbie Earl to record two hat tricks in an NCAA career. He is now up to four goals and four assists through six games played in the 2020-21 season.

Drafted 15th overall by the Canadiens in the 2018 NHL Entry Draft, he was named Big Ten Rookie of the Year and Scoring Champion during the 2019-20 season. It’s not extremely surprising coming from a player who scored 101 goals in 92 games played for the United States National Team Development Program during his draft year. He represented the USA during the 2020 World Junior Championship, amassing one goal and one assist in five games played.

Canadiens fans would love to see Caufield in the lineup during the 2020-21 season, but they will have to wait at least another year. Watching him dominate the NCAA for Wisconsin this year should help ease the pain. He should also play a key role for Team USA at the 2021 World Junior Championship where there look to avenge their performance from last year’s tournament, which saw them finish off the podium.

It’s never too early to start looking ahead to the 2021 NHL Entry Draft and Swedish forward Oskar Olausson is one of the countries top forward prospects eligible for the draft. The Stockholm-native spent the early part of the 2020-21 season playing for HV71 J20 in the J20 Nationell where he amassed an impressive 14 goals and 13 assists for 27 points in 16 games played. He has recently been called up to HV71’s Swedish Hockey League side and picked up his first career SHL goal on Tuesday in their 5-1 victory over Luleå.

Olausson represented Sweden at the 2020 Hlinka Gretzky Cup where he won a bronze medal and registered one goal in five games played. He is a top prospect and projected first-round pick for the 2021 NHL Entry Draft. A long stint in the SHL should help increase his draft stock, especially if he continues to put the puck in the back of the net. Before leaving the J20 Nationell his point-per-game total of 1.69 was ranked fourth best among players who played at least 10 games. Fellow HV71 J20 teammate Alexander Lundman led the way with 1.89.

It looks like Ducks prospect Lukas Dostal’s time in Finland is coming to an end. He is heading to Anaheim to join up with the team for training camp. Ever since joining Ilves in the Finnish Liiga, the Czech Republic-native has been one of the league’s top goaltenders. He was awarded the Urpo Ylönen Award for the league’s best goaltender after an impressive 2019-20 season. He finished with a 27-8-6 record, a .928 save percentage (SV%), and a 1.78 goals against average (GAA).

Through 11 games in the Finnish Liiga this season, he has an 10-1-0 record with a .941 SV% and a 1.64 GAA. He won eight games in a row before leaving the team and finished his last game with a 17-save shutout performance against Vaasan Sport on Nov. 14. His save percentage was 25 points higher than the next best goaltender in Oskari Setänen who had a .917 SV%.

John Gibson is the unquestioned start for the Ducks this season, but with Ryan Miller not returning, there is an open spot for Dostal to step right into the NHL. It’s been speculated that Anthony Stolarz has the inside track for the spot, but if Dostal can impress during training camp it’s not out of the question he could jump right into the NHL lineup. He’s proved everything he can in Finland and now it’s time to make his mark in North America.