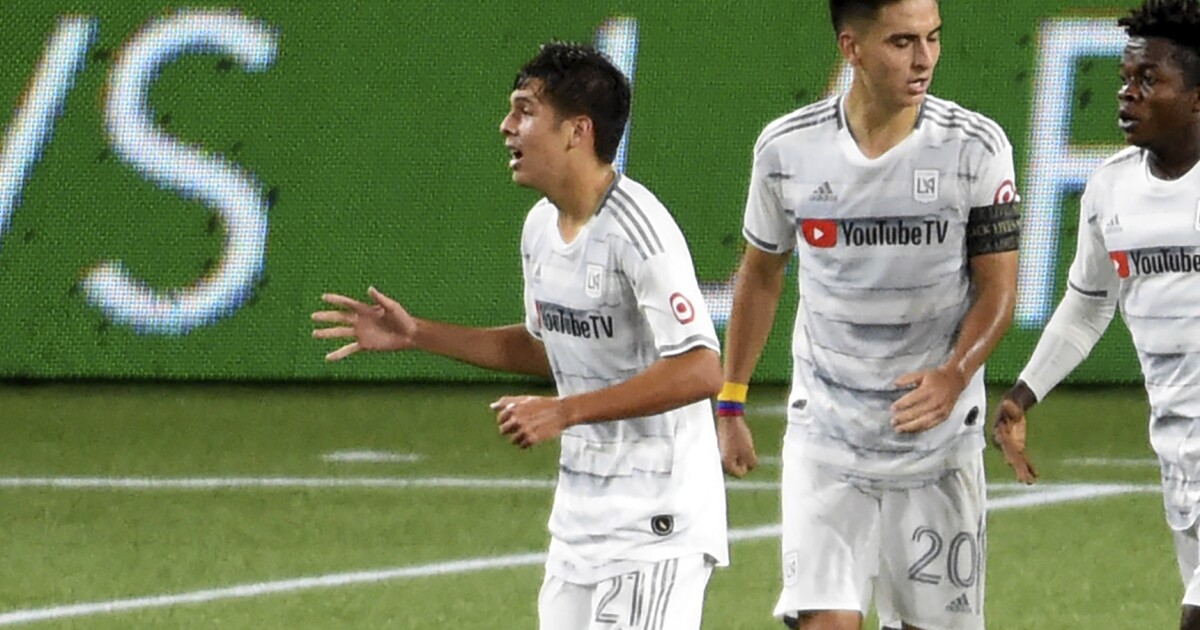 Most mornings, Chris Torres rises early, packs his eldest child, Christian, into the car and drives him to soccer practice.

Nothing unusual about that. It’s a scene that plays out regularly in thousands of Southern California households. Only Torres isn’t taking his son to a local park to train with an American Youth Soccer Organization (AYSO) team. Instead, they make a 45-minute drive from Fontana to Cal State L.A., where Torres plays for LAFC, one of the top teams in Major League Soccer.

More than seven months past his 16th birthday, Torres doesn’t have a driver’s license but does have a professional goal and a chance to start Tuesday night when LAFC meets the Seattle Sounders in a Western Conference playoff quarterfinal. And it’s one the forward is embracing.

“I’m absolutely ready for it,” Torres said by phone as Charlie, the family’s rescue dog, barked incessantly in the background. “From the first day I stepped into preseason, just building that confidence, making sure I don’t overwhelm myself.

“Most days I feel I was meant to be here. I feel I’ve worked hard enough.”

If Torres gets his chance, it will be because four LAFC starters — including Diego Rossi, the league’s leading scorer — tested positive for COVID-19 while with their national teams during World Cup qualifying. All four remain quarantined in South America.

“Diego oftentimes plays on the left side of our attack, and now he won’t be there. So one possibility is Christian Torres,” LAFC coach Bob Bradley said. “He’s not the exact same player as Diego, but he’s still a young player that, in recent games, has shown that he’s confident. He’s a threat to score goals.

“When you say you can’t replace Diego, maybe you can’t, but who knows? Maybe on the day Christian can play as well as Diego. Maybe he can play better.”

Maybe, but LAFC might need more than that because it hasn’t won in Seattle since 2018, when a goal by Rossi stood up for a 1-0 victory in the franchise’s first regular-season game. Plus the Sounders ended LAFC’s season last year, winning the conference final en route to their second MLS title in four seasons.

Christian Torres scores his first goal for LAFC against Portland on Oct. 18.

Also missing for the playoff rematch are forward Brian Rodríguez, the team’s assist leader with seven, midfielder José Cifuentes and defender Diego Palacios. The trio combined for 46 starts this season.

If Torres starts, he will play next to Bradley Wright-Phillips, 35, who scored his first Premier League goal for Manchester City less than eight months after Torres was born. Torres has closed the gap quickly since, joining the Galaxy’s academy as a defender in 2016 and scoring 10 goals in 31 games with the U-12 team.

He scored 15 times the next season, but the Galaxy kept him on the back line, so Torres jumped to the fledgling LAFC academy, where he moved to forward and led the U-15 team with 17 goals.

“My family and I felt it was the right moment for me to continue my career somewhere else,” Torres said. “So far, it’s been a great journey.”

A journey that included an invitation to the first team’s training camp in January and a professional contract in July, about the time most of his friends were finishing their sophomore year in high school. Torres made his MLS debut seven weeks later in Seattle, becoming the first homegrown signing to play for LAFC.

Torres played in half of LAFC’s final 16 games, starting twice and scoring once. And while Rossi was named the best young player in MLS this year, at 22 he’s an old man compared with Torres, the third-youngest player to appear in a regular-season game in 2020.

Torres’ timing couldn’t be better. On the first weekend of the MLS playoffs, three teenagers scored goals that either put their team in front or forced extra time. If Torres gets one Tuesday, he will become the youngest goal scorer in MLS playoff history.

He has already won over his teammates and coaches.

“Christian is a hardworking player. He’s someone that you can trust. He know his position well and what we want of him,” said midfielder Mark-Anthony Kaye, who hopes to start Tuesday for the first time since he severely sprained his right ankle in LAFC’s last game against Seattle on Oct. 11.

“In terms of him being ready to step in, I’m not surprised,” added Todd Saldaña, LAFC’s academy director. “He was just itching at the opportunity.

“He’s not overthinking it. He’s doing what comes natural to him.”

Now if he could only get his driver’s license, his dad could sleep in.