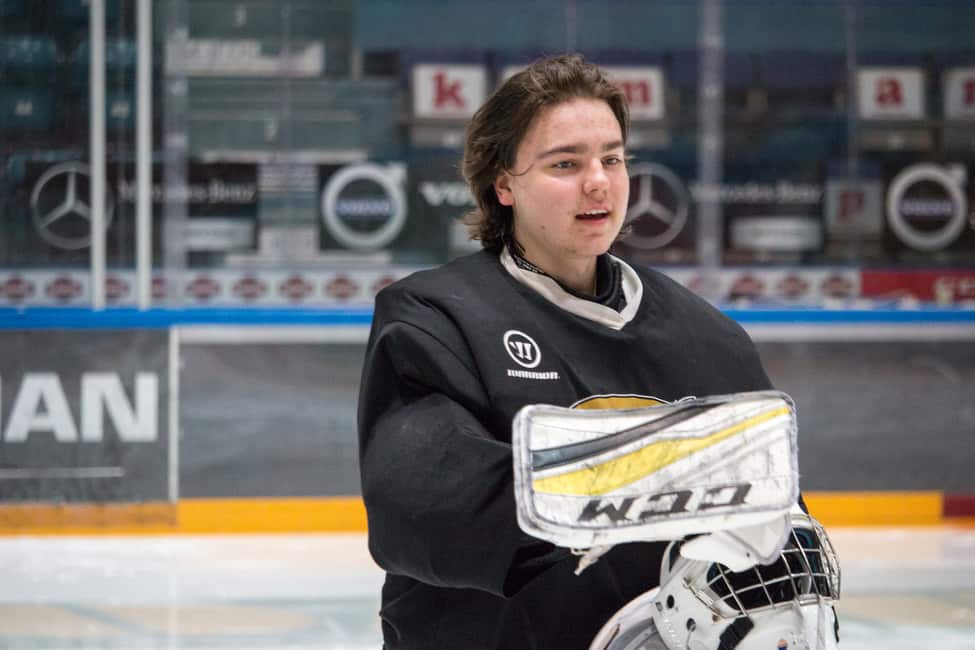 The Colorado Avalanche have one of the most exciting teams in the NHL as it stands. They have a dynamic forward core that boasts names like Nathan MacKinnon, Mikko Rantanen, and Gabriel Landeskog. They have a young, sturdy defensive core led by Cale Makar with names like 2019 fourth overall pick Bowen Byram waiting in the wings. And they have a reliable tandem between the pipes with Philipp Grubauer and Pavel Francouz.

If I haven’t made my point clear enough, the Avs currently have a sustainable core and farm system that will keep them among the top Cup contenders for years to come.

The only thing the Avs are really lacking right now is an elite No. 1 goaltender. That’s not to say Grubauer and Francouz aren’t both good goalies. But they don’t have a Carey Price, or an Andrei Vasilevskiy, or a Tuukka Rask per se. The tandem as it stands is more than capable, but the Avs don’t have that clear cut No. 1.

Lucky for them, it would appear as though the Avs have their future No. 1 guy waiting in the system. (from ‘Chambers: Finnish goalie Justus Annunen could be “that guy” for the Avalanche, Denver Post, 01/02/2020).

And his name is Justus Annunen.

Now, before I say anything, I know we need to pump the brakes any time we talk about a player from the European leagues coming to North America. For every Igor Shesterkin, there’s a Jonas Gustavsson. But if Annunen’s development continues the way it’s going, I think there’s a far better chance he ends up having a career in the NHL instead of flopping. The Avalanche signed him to an entry-level contract back in May, so they clearly have faith in him.

Drafted 64th overall in 2018, Annunen is currently in his second season with Oulun Karpat of the SM-Liiga, Finland’s top pro league. This year, he won the full time starting gig and has a record of 4-2-2 with a GAA of 2.24 and a save percentage of .890 through eight starts. These are solid numbers. The save percentage isn’t great, but when you consider the fact that he’s only 20 years old, they all of a sudden look that much better. Granted, eight games is a pretty small sample size. Let’s have a look at how Annunen fared last year.

A Rookie Year to Remember

The Kempele native spent last season splitting starts with fellow netminder Patrik Rybar, whose NHL rights are owned by the Detroit Red Wings. Through 23 games, Annunen piled a record of 15-5-3 with a goals-against average of 1.77 and a save percentage of .929. He also backstopped Finland to a fourth-place finish at the 2020 World Juniors, where he finished the tournament with a save percentage of .916 and a goals-against average of 2.65. His highlight performance came in a 42-save effort against Sweden.

The young Finn drew attention all throughout last season. He set a new record for longest shutout streak at 302:05, and finished second in the league with six shutouts. He also finished with the highest save percentage and lowest goals-against average among goaltenders. Oh yeah, and he accomplished all of this at 19 years old.

He also stopped 44 out of 47 shots where he was being screened, showing that he already has the ability to use his 6-foot-4 frame to the best of his advantage and cover up any openings. Karpat finished first in the league last season, so you could make the argument that Annunen’s stats were slightly padded thanks to having the best team in the league in front of him. But then again, what’s a good team without a good goalie?

Heading into the 2020-21 season, he ended up taking the starting job from Rybar. It’s also worth mentioning that Rybar himself put together a career year as well last season. He finished fourth in save percentage league-wide and third in goals-against average, so he’s no slouch either. It’s not like the job was Annunen’s for the taking on a silver platter. Karpat is sitting at sixth in Liiga standings at this point, so his stats have taken a little bit of a hit this year. This is to be expected. But truthfully, what he’s been able to achieve in his time with Karpat is nothing short of outstanding.

If I’m Joe Sakic, I’m chomping at the bit to bring Annunen to North America after this season. Grubauer will be an unrestricted free agent after the 2020-21 NHL season and Francouz’s contract expires in 2022, so this is near perfect timing to get Annunen some NHL starts and see what he’s made of. And, worst-case scenario, he needs a little extra time in the AHL to hone his skills and adjust to North American ice. In the end, the Avs seem to have a potential future star between the pipes, and if his development goes according to plan, I believe they will have their guy for years to come.