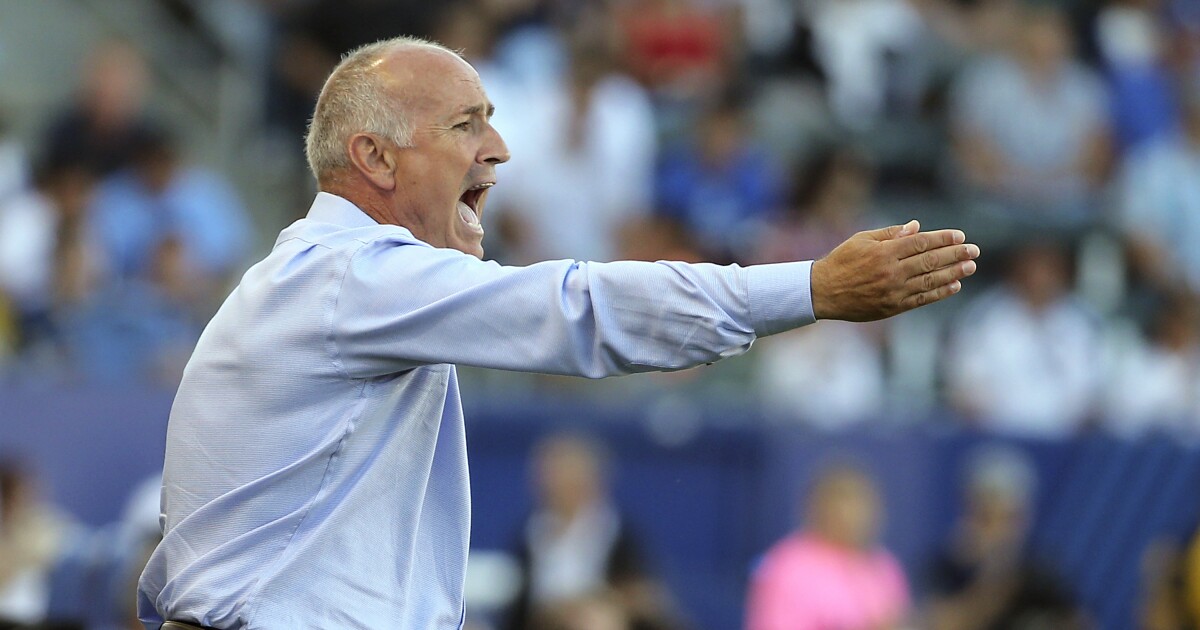 There isn’t much Dominic Kinnear hasn’t seen or done in a 35-year soccer career that has spanned three countries and two continents. But Saturday brought something new when Kinnear held his first videoconference as a head coach during a global pandemic.

And the blue-and-gold Galaxy facemask he wore wasn’t the only source of discomfort during the 15-minute call.

For the second time in three years the Galaxy have fired a friend of Kinnear’s and appointed him to pick up the pieces and finish out the season as manager. This time it was Guillermo Barros Schelotto, who was let go early Thursday with the team tied for last last in the Western Conference and clinging to just the faintest of hopes of a playoff berth with three games to play.

“It’s a very sad day when something like that happens, especially when you’re part of the staff,” said Kinnear, who was a Schelotto assistant. “You never like to see that. So the last couple days, first and foremost have been sad.”

But after sending Schelotto his prayers, Kinnear turned his thoughts to the task at hand.

“My focus right now is three games,” he said. “We just want to win. Give the guys some positive energy. A win always does that.”

There wasn’t much positive energy under Schelotto, with the Galaxy going 5-11-3 this season and winning one of their last 10 games. Kinnear gets his first shot at changing that Sunday against Real Salt Lake.

With MLS using points per game rather than regular-season records to determine playoff berths, the Galaxy must win their three remaining games and get help to make the playoffs. That’s an unlikely scenario. But a strong finish could help the team avoid its second last-place finish in four years and create some momentum to carry into the offseason.

“The Galaxy should not be in last place,” Kinnear said. “Not finishing in last place for me should be part of our ambitions. This game against Salt Lake is the most important game of the season.”

Kinnear said one of his first moves as manager was to hold a meeting to clear the air and try to bring the team together.

“We are angry. We are disappointed and sad this happened to Guillermo,” he said. Kinnear also had the team watch video of Wednesday’s 5-2 loss in Portland “just to kind of remind them that, yeah, things are not looking very good right now.”

“But,” he added, “we do have the talent to make some things happen going forward.”

With 169 wins and two MLS titles as a head coach, Kinnear is among the most successful managers in league history. He’s also popular in the locker room. Two years ago, after Kinnear replaced Sigi Schmid with six games to go, the Galaxy rallied to the verge of a playoff berth only to let it slip away by conceding two goals in the season’s final 17 minutes.

“He’s close to the players. The players really and truly respect him as a highly qualified manager in this league,” Galaxy general manager Dennis te Kloese said.

Te Kloese said he intends to take his time in the search for a permanent manager, and Kinnear, who did not get serious consideration for the job two years ago, said he hasn’t decided if he’ll ask to be considered this time.

“That would be really selfish of me to think I’m putting myself in position to get my name in the mix,” he said. “I was asked to do a job and that was to take over the team for the rest of the 2020 season.”

Fired along with Schelotto were four assistants. Because there’s not enough time for replacements to clear the COVID-19 screening process, Jovan Kirovski, the Galaxy’s technical director, will be the only person on the bench with Kinnear on Sunday.

Also absent will be Javier “Chicharito” Hernández, the team’s top-paid player. Hernández, who lost his starting job after scoring just one goal in 10 games, has missed the last two matches with a hamstring injury of uncertain origin and severity.