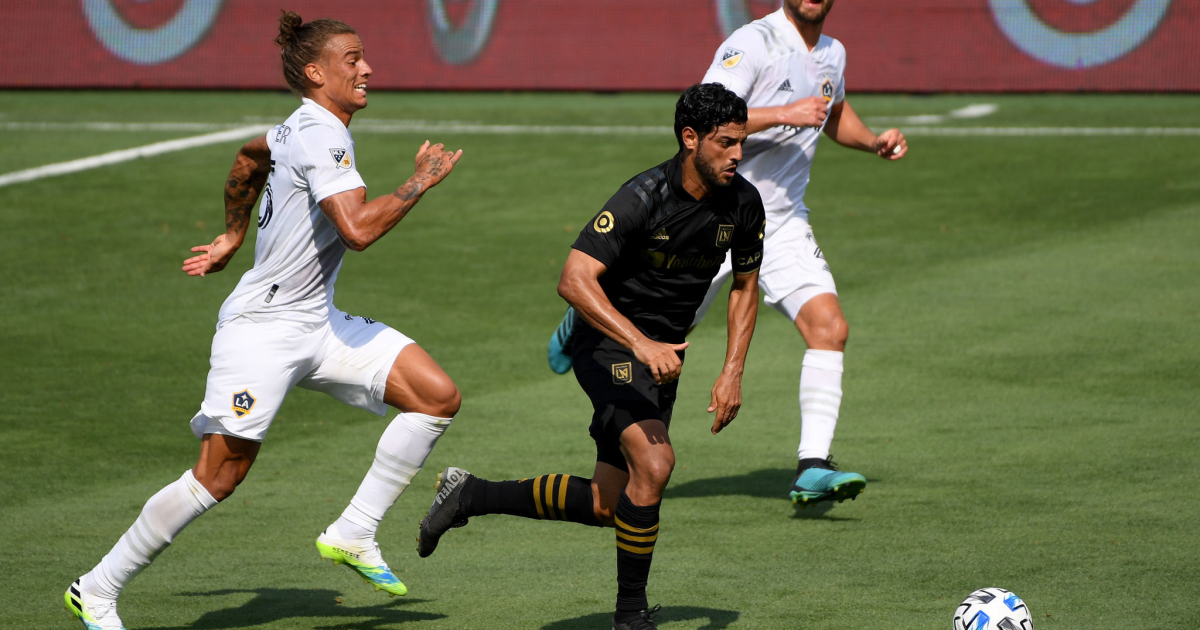 The last time LAFC coach Bob Bradley had his first-choice lineup on the field there were fans in the stands and Bernie Sanders still had a shot at winning the Democratic nomination.

That was seven months and 17 games ago. Since then injuries and absences have resulted in unexpected opportunities for unsung players such as Danny Musovski, whose fifth goal of the season Sunday started LAFC to a 2-0 win over a Galaxy team that played most of the afternoon with just 10 men.

Musovski didn’t make his first MLS start until last month but is now third on the team with five goals — two them game-winners. He is also one of 30 players who have gotten important minutes this season, confidence and experience that have paid off handsomely by keeping LAFC (8-7-4 and fourth in the Western Conference) headed toward next month’s MLS playoffs.

That playing time could begin drying up as Bradley gets his regulars back. Carlos Vela, the reigning league MVP, made his second appearance since early March on Sunday and scored a stoppage-time goal. Defender Tristan Blackmon also made a 13-minute cameo in his return from injury and four other players returned from three-week absences with their national teams.

That leaves midfielder Mark-Anthony Kaye, who is rehabbing an ankle sprain, as the only starter still sidelined. And even Musovski, who could find himself back on the bench in the postseason, applauded the progress.

“Now is when we want to hit our stride, to get all these guys back and contributing,” he said. “Of course I want to start. I think every player on the team wants to start. We have a lot of offensive weapons on this team and we want a good stride now when it’s most important, in these last few games and going into the playoffs.”

Meanwhile playoff hopes are fading for the Galaxy (5-10-3). Not only did the loss keep them in the conference cellar, four places and six points from the eighth and final playoff berth with two weeks left in the regular season, but they put up little fight offensively.

With striker Javier “Chicharito” Hernández, the team’s biggest offseason signing, unavailable because of a hamstring injury, the Galaxy (5-10-3) were outshot 27-5 and didn’t put a try on goal until deep into stoppage time. Not that they had much of a chance: LAFC had the ball for 58 of the 90 minutes.

With Dan Beckerman, president and CEO of AEG, the Galaxy’s parent company, watching from a suite, it wasn’t a performance that’s likely to help embattled coach Guillermo Barros Schelotto, whose team has won one of its last nine and been shut out five times in that span.

And things went from bad to worse for the Galaxy in the 25th minute when they lost defender Giancarlo González to a red card after he tripped LAFC’s Diego Rossi on the edge of the penalty area.

LAFC couldn’t take advantage until 13 minutes into the second half when Rossi launched Musovski on a breakaway up the center of the field. The rookie won the race with defender Nick DePuy, then chipped the ball in, spoiling a strong performance from goalkeeper Jonathan Klinsmann, who finished with five saves.

The Galaxy argued the ball was out of bounds before the build-up to the goal but video-assistant referee Guido Gonzales Jr. allowed the play to stand.

Vela, who came on late in the second half, added an insurance goal three minutes into stoppage time, his third score in four games this season, another sign that LAFC, which has taken 10 points from its last five games, is building momentum at just the right time.

“It means a lot to everybody that Carlos not only gets back on the field but then scores an excellent goal,” Bradley said.