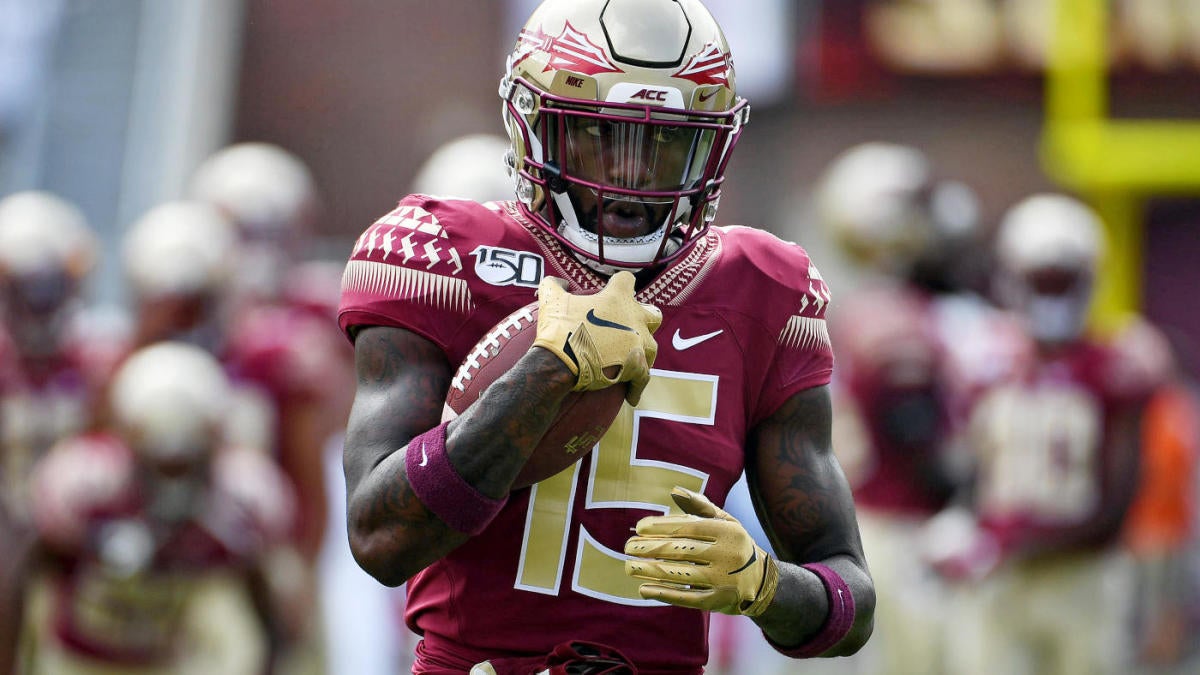 Most of the top receivers in college football win with awesome athletic gifts, speed, and super-savvy route running ability — hint, hint Alabama’s duo of Jaylen Waddle and Devonta Smith. Then, there are a few who are tall, physical rebounders. But one unique pass catcher has caught my eye early in the scouting process. He’s neither incredibly fast nor a towering high-point specialist.

UCF’s Marlon Williams is a compact, contact-balance stud who’s been the No. 1 target on the club’s potent offense, and he was an integral part of the 59-52 win over Memphis.

On the structure front for WR Watch, I decided it was essentially pointless to provide specific rankings of the wideouts prospects each week because everything is so fluid during the season from a scouting perspective. Instead, I’ll simply include “stock up,” “stock steady,” or “stock down” after each receiver’s name based on how well he played in the most recent contest.

I’ve realized I could just write “stock steady” for Waddle when he crosses the century mark receiving and has one long score in any game, because that’s the standard he’s set for himself. But he gets another “stock up” because of the job he did against Georgia’s previously suffocating secondary that features multiple future NFL players.

His 90-yard touchdown in the third quarter toppled the floodgates and was a demonstration of his acceleration off the ball and lightning-fast top gear. Waddle went for 161 on six grabs against the Bulldogs.

Smith long took a back seat to Deebo Samuel and Bryan Edwards at South Carolina, and he’s looked completely comfortable being front and center in the Gamecocks offense this season. He helped Collin Hill move the chains over the middle and near the sidelines in the first half then had a nasty high point on a somewhat underthrown ball into the end zone in the third quarter that gave South Carolina the lead in what eventually became a nice little upset for that program over Auburn.

After a dynamic 2019, Newsome hasn’t met the hype early in 2020, and the Tar Heels could’ve used more production from him in what ultimately was a narrow upset defeat at the hands of Florida State. The sudden slot wideout was limited to just four catches for 37 yards. Disappointing.

Williams has put draft analysts on notice. Yes, he’s in UCF’s wide open Air Raid offense, but he has three outings of more than 135 yards receiving to date. At 6-0 and 215 pounds, he’s in that A.J. Brown mold of a wideout who’s stocky with a powerful lower half which makes him deceptively awesome after the catch. He didn’t look particularly fast on his 95-yard touchdown — that was a blown coverage — he didn’t get hawked down.

Adams is a relentless bully in the Fun Belt. He had 15 grabs for 176 yards and two scores in a high-scoring classic over Georgia State. After initially working underneath — and flashing his athleticism around and power through tackles — Adams made a phenomenal catch for a score that he had no business reeling in with a defender draped on him. His second score was even more outrageous, as he tracked the underthrown, back-shoulder ball near the front right pylon to give Arkansas State the lead in the fourth quarter. At 6-foot-3 and 210 pounds with loads of production, Adams is absolutely on the draft radar.

After a scintillating 2020 debut that included a kickoff-return touchdown and over 100 yards receiving, against BYU, Stevenson was that firework on the fourth of July that just doesn’t ever ignite. One catch, 19 yards. One rush for a six-yard loss and nothing special on his three kick returns. All of that’s strange, because Stevenson is one of the most incendiary wideouts in the country from a pure athleticism perspective.

We’re trending toward Atwell being a Day 3 pick instead of a prospect who’ll be sought after on Day 2 in April. He’s very small for the NFL but was tremendously difficult to tackle last season en route to a 1,200-plus yard season while averaging over 18 yards per reception. His yards-per-catch average has dropped to under 11, and he simply hasn’t been a big part of Louisville’s offense to start the season. Atwell had four snags for 40 yards in the Cardinals loss to Notre Dame on Saturday.