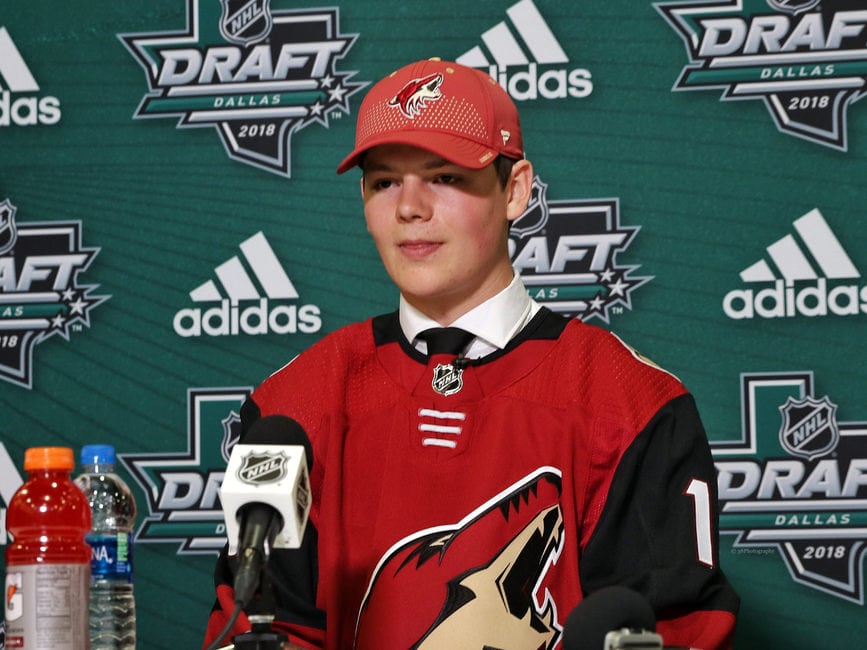 The Coyotes have loaned top prospect Barrett Hayton to Ilves in the Finnish Liiga. Drafted fifth overall in the 2018 NHL Entry Draft, he spent an injury-burdened season between the NHL and American Hockey League (AHL). He featured in 20 games with the Coyotes, amassing one goal and four assists for five points. In the AHL with the Tucson Roadrunners he had one goal and four assists in five games played. Hayton missed a majority of the 2019-20 season due to a shoulder injury, but came back to play in three playoff games with the Coyotes and was held pointless.

Hayton was one of the best players at the 2020 World Junior Championship (WJC), winning a gold medal with Canada and finishing second in scoring with six goals and six assists in seven games played. He was named to the WJC All-Star Team.

With the start of the 2020-21 NHL and AHL seasons still undetermined, it’s not surprising that Arizona found somewhere for Hayton to play in the meantime. Recovering from his injury and getting back to 100 percent will be the goal for Hayton in Finland. He is expected to return to the Coyotes once training camps open for the 2020-21 NHL season.

The Blues announced on Saturday that they’ve agreed on a standard three-year, entry-level contract for Jake Neighbours. Drafted 26th overall in the 2020 NHL Entry Draft, Neighbours spent the 2019-20 season in the WHL with the Edmonton Oil Kings. He amassed 23 goals and 47 assists for 70 points in 64 games played. He won a silver medal with Canada at the Hlinka Gretzky Cup, in which he was held pointless in five games played.

In a press release by the Blues, Neighbours had this to say about signing with the team.

Obviously I know the NHL is a jump for sure and it’s a process. This is one step in it and we’ve just got to continue from here. I’m ready for whatever amount of work I need to put in or however long this is going to take because at the end of the day, to pull over that Blues jersey will be insane and to play an NHL game with them would be absolutely crazy. I’m ready for whatever it takes.

Neighbours will return to the Oil Kings for the 2020-21 WHL season. It was recently announced that their season would begin Jan. 8, 2021. It might be a while before Blues fans can see Neighbours in the NHL, but his all-around ability coupled with his sturdiness and solid work ethic make a good case for him to become a fan favorite once he does arrive.

The Sharks announced on Friday that they have agreed a standard, three-year, entry-level contract with Ozzy Wiesblatt. Drafted 31st overall in the 2020 NHL Entry Draft, Wiesblatt spent the 2019-20 season playing for the Prince Albert Raiders in the WHL where he amassed 25 goals and 45 assists for 70 points in 64 games played. He finished second in team scoring trailing only Washington Capitals prospect Alexei Protas.

In a press release from the Sharks, general manager Doug Wilson described what Wiesblatt brings to the organization.

Ozzy brings speed, playmaking, and offense to the lineup, which makes it difficult to play against a talented skater like him. His tenacity for the puck paired with his ability to retain possession and drive the offensive side of the game, along with his character on and off the ice, makes him a valuable player for our organization.

After losing their first-round pick to the Ottawa Senators in the Erik Karlsson trade, the Sharks acquired the Tampa Bay Lightning’s first-round pick in exchange for Barclay Goodrow. There was a reason the Sharks wanted to get back into the first round and Wiesblatt seems to be the player they were targeting. He’ll be back in the WHL for the 2020-21 season.

Kings prospect Helge Grans has started the 2020-21 Swedish Hockey League season in impressive fashion. After only recording one goal and two assists in 21 games played for the Malmö Redhawks during the 2019-20 season, he’s already amassed two goals and three assists in five games played.

He split the 2019-20 season between the Malmö Redhawks in the SHL and their J20 team in the J20 SuperElit. In the J20 league he put up four goals and 23 assists in 27 games played. Despite playing so few games in the J20 he was still fourth in team scoring and led all Malmö defenseman in points. As you can see by this assist below, he’s enjoying life in the SHL.

Grans was drafted 35th overall in the 2020 NHL Entry Draft by the Los Angeles Kings. Outside of Jamie Drysdale and Jake Sanderson, there are many who believe that Grans could be the third-best defenseman out of this draft class. There’s still plenty of time to come to those conclusions, but Grans is making an early case to be that guy.