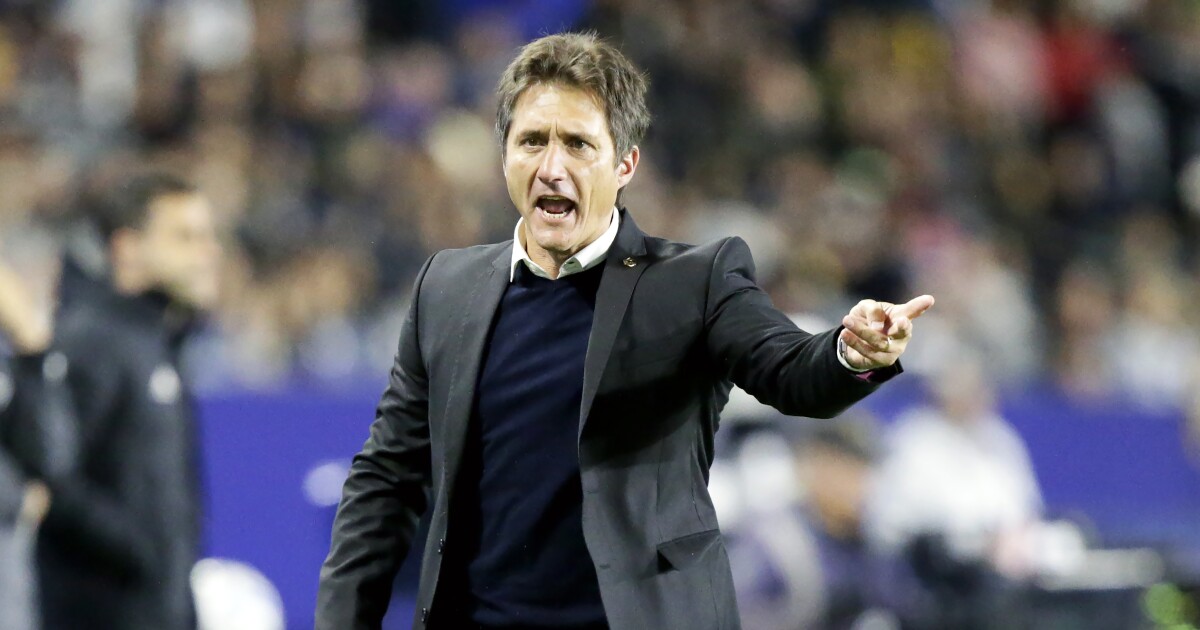 The Galaxy were playing to end a six-game losing streak and to save their coach’s job Sunday, not necessarily in that order. And they got one of those things accomplished in a 1-0 win over the Vancouver Whitecaps.

The fate of coach Guillermo Barros Schelotto, however, remains very much unsettled because while the win halted the losing streak a game short of equaling the franchise record, the team remains buried in last in the Western Conference standings, four places and three points out of a playoff berth with three weeks left in the regular season.

The game’s only goal came from Kai Koreniuk, his first in MLS, a minute into stoppage time. Cristian Pavón got the assist while Jonathan Klinsmann made four saves in goal to record his first shutout in his second start.

“We managed the game [and] the goal appeared in the last minute,” Schelotto said. “We deserved to win today. It will give us confidence for the next game.

“We need to win some games and then think about the playoffs.”

A few minutes later, speaking in Spanish, he addressed his job security.

“I understand football,” he said. “In some places there is more pressure than in others, but the handling of these things is the same everywhere. Nobody has told me anything different than what we have talked about growing this project “

The last time the team won a game, Ruth Bader Ginsberg was still on the Supreme Court and the Dodgers hadn’t clinched a playoff berth, much less a spot in the World Series.

In fact, aside from a 15-day stretch in late August and early September, the Galaxy (5-9-3) hadn’t won another game for Schelotto all season. In the last six weeks, the team, which has plenty of talent but has lacked both direction and a defined playing style, has been outscored 19-6 and has led for just 38 minutes.

Sunday was the Galaxy’s season in microcosm: They lost the possession battle and were outpassed by a wide margin. And though they outshot the Whitecaps 18-7, they lacked for creativity, were ineffective in the final third and put just five shots on goal — the final from Koreniuk making those other numbers moot.

Highlights from the Galaxy’s 1-0 victory over Vancouver on Sunday.

Koreniuk, 22, who had played one minute before Sunday, came on in the 87th minute and became the first Galaxy player to score this season after coming off the bench. His one goal also equals the season production of Javier “Chicharito” Hernandez, the team’s $6-million offseason signing.

“It an absolute adrenaline rush to score that goal,” Koreniuk said.

Whether Sunday’s result changes the mood in the dressing room remains to be seen. Frustration and anger had been building there over the last month, which is one reason Dan Beckerman, president of the Galaxy’s parent company AEG and the man who will decide the coach’s future, watched Sunday’s game from a club suite.

Schelotto, 47, came to the Galaxy in January 2019 with high hopes, a rich pedigree and a three-year deal after coaching Boca Juniors to consecutive first-division titles at home. But the Galaxy never really bought into his style, going 21-24-6 and getting outscored 89-78 since his hiring.