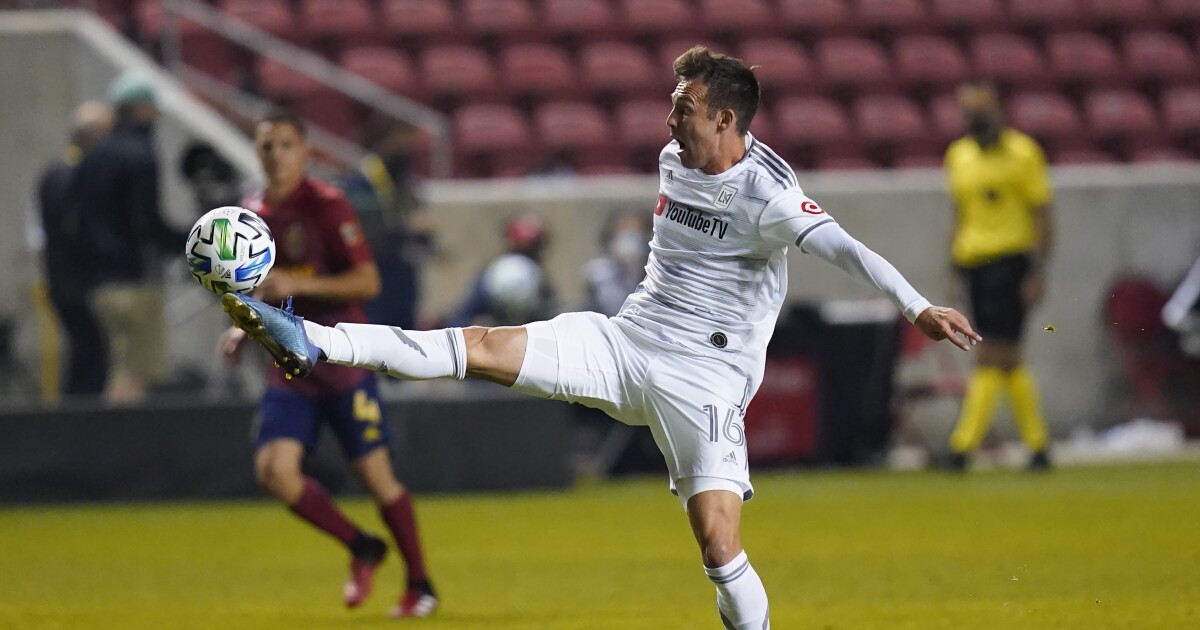 With four starters missing to international duty and two others to injury, LAFC coach Bob Bradley had to go to the end of his shallow bench just to field a starting lineup Sunday.

Then things got really bad.

Thirteen minutes after kicking off against the reigning MLS champions, LAFC saw two more players hobble off to the locker room. Before the afternoon was over Bradley had used a 16-year-old for a full half at forward, got 77 minutes from a defender who hadn’t gone that long in 15 months and played a 19-year-old who wasn’t even on the team six days ago.

But rather than mourning the circumstances, LAFC went to work, pressing the visiting Seattle Sounders all over the field and escaping with a gutsy 3-1 victory, arguably the signature win of what has been a difficult season.

“Great mentality to win a game where there’s so many things that just seem to be going against us,” Bradley said. “It’s a game that’s not one where I can talk about the quality of the football. It is a night that’s more about everybody sticking together, finding ways to make some advantages, get some goals, and find a way to see the game out.”

It was also a game in which LAFC needed contributions from everybody — and got them. Forwards Danny Musovski and Adrien Perez each made their second MLS starts and Musovski responded with two goals, double his career total. Veteran defender Jordan Harvey, who had played just 216 minutes in the last seven months, made his second consecutive start and saved the game by heading a Yeimar Gomez shot off the line early in the second half.

Midfielder Francisco Ginella, who lost his starting job last month, returned Sunday and scored his first MLS goal and Pablo Sisniega strengthened his grip on the first-choice job in goal, holding the league’s second-highest-scoring team to a late goal from Nicolás Lodeiro.

Even Kwadwo “Mahala” Opoku, 19, who didn’t join LAFC until the middle of last week, helped by closing out the win.

“That speaks to our team character to just see that and then fight through it,” Musovski said. “We just tried to fight through it. Everyone who came in after that did a good job of stepping up.”

LAFC (7-6-3) was shorthanded before it got to the stadium, having excused four starters — including MVP candidate Diego Rossi, the league’s leading scorer — to join their national teams for World Cup qualifiers.

Bradley then lost two more players before anybody had broken a sweat with midfielder Mark-Anthony Kaye needing help to the locker room in the sixth minute after severely turning his right ankle and Andy Najar, the man who replaced him, lasting just seven minutes before going off with a hamstring injury.

Bradley said Kaye’s X-ray was negative; he’ll undergo further examination Monday. Najar will have an MRI exam and could miss the rest of the season.

Najar still was hobbling away when Musovski began to change his team’s luck, running on to a long, bending Eduard Atuesta free kick at the far post and heading it in to give LAFC a 1-0 lead. Musovski picked up his first career assist on the second goal, one a spinning Ginella slipped just between Seattle keeper Stefan Frei and the near post in the 65th minute.

Musovski closed out the scoring 19 minutes later, erasing Lodeiro’s goal by pouncing on a loose ball in the center of the penalty area and lining it by a helpless Frei.

The win was LAFC’s first in three tries with conference-leading Seattle (9-4-3) this season and its second of the year over a team with a winning record. Coupled with last week’s victory over Real Salt Lake, it gave LAFC consecutive wins for the first time this season and lifted it to fourth in the Western Conference standings, five points ahead of the Houston Dynamo in the battle for the final playoff berth.