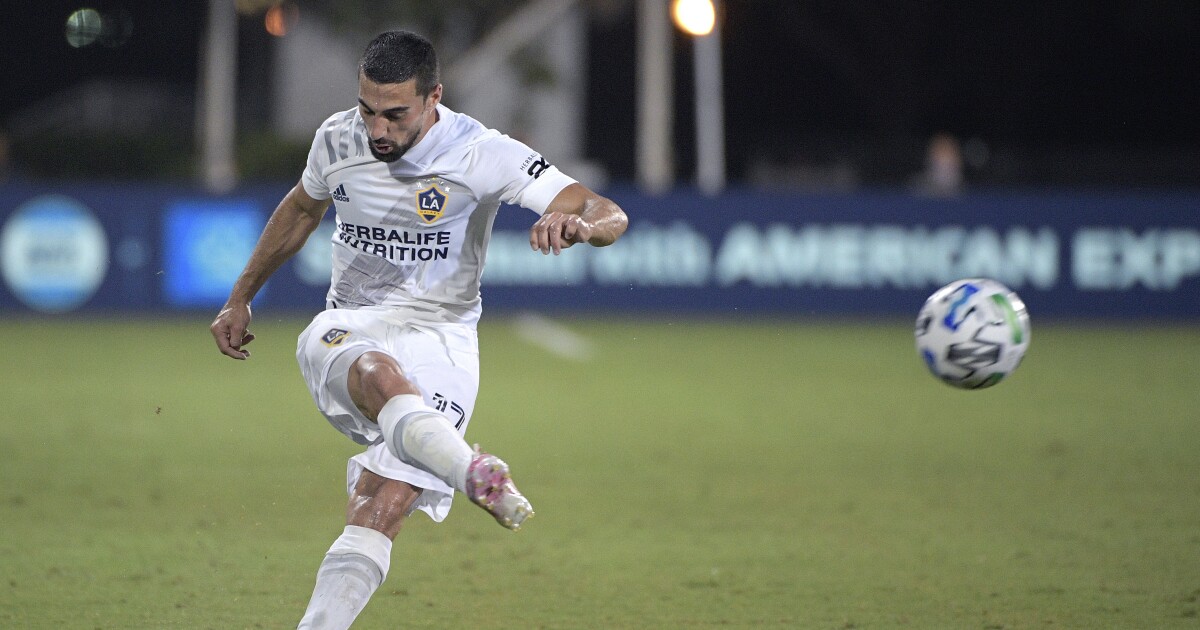 The last time the Galaxy scored a goal before Sunday night, the NFL season hadn’t started, the Supreme Court still had its full complement of justices and the air above Southern California was blue, not choked with ash.

That was three weeks ago, which was also the last time the Galaxy won a game. And while one of those streaks came to an end Sunday at Dignity Health Sports Park, it hardly mattered, with Sebastian Lletget’s header in the 88th minute serving as little more than a murmur of protest in a 3-1 loss to the Seattle Sounders that extended the Galaxy’s winless streak to four games.

The loss dropped the Galaxy (4-6-3) to within a point of the cellar in the 12-team Western Conference and left them three points and three places out of a spot in the expanded MLS playoffs. It’s been a precipitous fall for a team that, a month ago, was working on the conference’s longest winning streak.

“If you look at this stretch of games, we have had some chances,” Lletget said. “We start the game soft. The intensity’s not right. Something has to change in that sense.”

He continued: “I wish we could just change one thing and then everything would fall in place. We all need to start better and be that much more intense.”

So while Lletget’s goal ended the Galaxy’s scoring drought at 365 minutes, the team’s longest since 2017, it did nothing to change the final result.

No one else helped much with that either.

Cristian Pavón, the team’s leading scorer, assisted on the goal but had just one shot of his own on target — his first in three games — while Javier “Chicharito” Hernández, the team’s $6-million designated player, hasn’t scored since returning from a torn calf.

In fact, Lletget’s goal was the first the Galaxy have scored since Hernández came back. The team is winless in the seven games he has appeared in this season but is 4-1-1 without him.

The conference-leading Sounders (7-3-3) were missing Raul Ruidiaz, the league’s third-leading scorer, who was suspended for a violent foul in Seattle’s last game. But the Sounders didn’t appear to miss him, going ahead 1-0 in the 12th minute when a wide-open Cristian Roldan tapped in a low feed from Jordan Morris at the far post for his first score of the season.

The Galaxy, meanwhile, didn’t put their first shot on target until the 33rd minute, when Joe Corona rolled a soft right-footed shot right at Seattle keeper Stefan Frei. Five minutes later, Morris doubled the lead on a counterattack, outrunning Galaxy defender Rolf Feltscher to catch up to a long Nicolas Lodeiro through ball before beating Galaxy keeper David Bingham for the easy finish for his seventh goal of the season.

It was the second time in four games Morris has had a goal and an assist in the first half.

Things would only get worse for the Galaxy after that with wunderkind winger Julian Araujo, who missed the last game with a red card, drawing another caution before the end of the first half and earning a suspension from the next game for yellow-card accumulation.

Sixteen minutes into the second half, Roldan added to the misery. João Paulo sent a ball from well behind the center circle over the top for Roldan, who had split the Galaxy back line and was sprinting alone up the center of the field. From there it was a foot race with Daniel Steres, one Roldan won easily before chipping the ball over an angry Bingham.

That left the Galaxy again searching for answers that weren’t quick in coming.

“We’ve got to stick together,” defender Nick DePuy said. “We’re disappointed we lost. But we’ve got a game next week. We can’t dwell on this.”