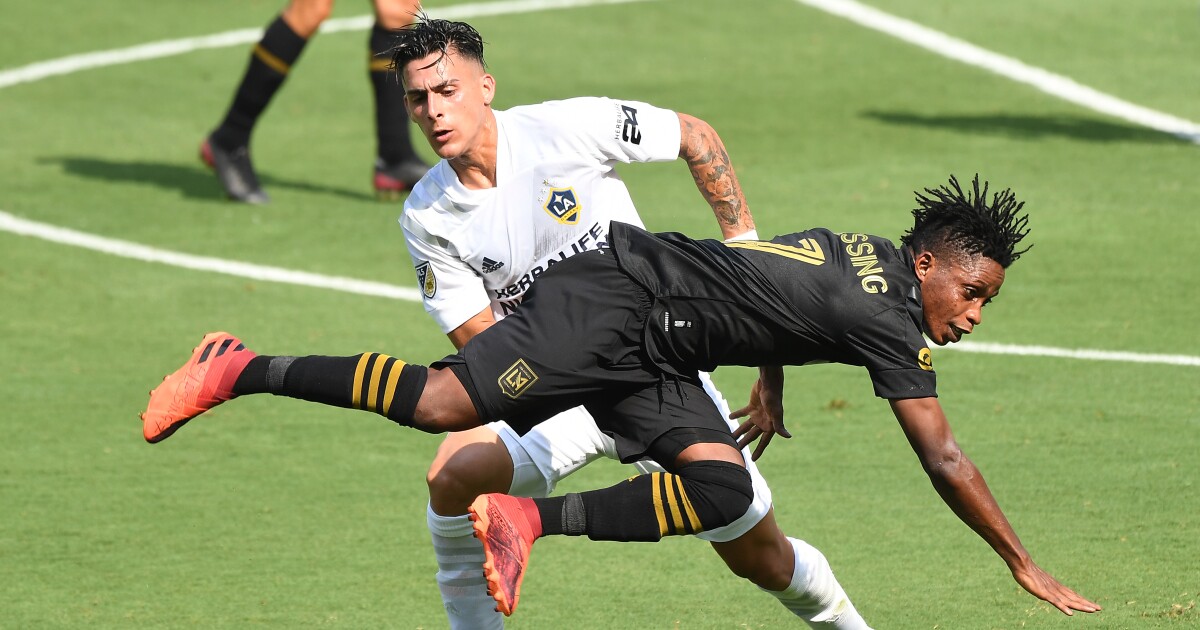 When the Galaxy and LAFC returned from the MLS Is Back tournament in Florida this summer, they were headed in opposite directions.

The winless Galaxy were off to the worst start in franchise history, were missing two of their best players to injury and were so listless that their coach repeatedly accused them of quitting. LAFC was unbeaten, had made it to the tournament quarterfinals, and would get Carlos Vela, the reigning league MVP, back when it got home.

Six weeks later, the teams are still going in opposite ways, only now the directions have been reversed.

For LAFC, coming off its first win since July, another loss would be its third in four games, its worst stretch in more than two years.

Galaxy forward Cristian Pavón said his team’s change in fortunes was mainly a matter of getting fortunate.

“We just weren’t lucky,” he said of the team’s struggles. “I think what has changed is the attitude, the mentality, knowing how to win.”

There’s more to it than that, of course. Coach Guillermo Barros Schelotto, who seemed to be one more embarrassing loss from possibly being fired, has been brilliant during the winning streak. He started teenage defender Julian Araujo at right wing in the first two games, and Araujo had two assists. When he moved Araujo back to his usual spot at right back and replaced him up front with Efraín Álvarez, another teenager, Álvarez rewarded him by setting up a game-winning score, then adding his first MLS goal.

Schelotto moved Sebastian Lletget into the center of the midfield, and Lletget responded with two goals and two assists.

“We’re getting a lot of goals now when maybe before we didn’t have them,” Pavón said in Spanish. “At the start of the season, we had a lot of chances but we weren’t finishing them. Now we are. We just have to stay on this path.”

Schelotto also got captain Jonathan dos Santos back from injury — though he’s played just 81 minutes — and has seen Javier “Chicharito” Hernández return to training. But the most notable difference between July and September might be on defense, where the Galaxy (3-3-2) once looked about as organized as third-graders at recess.

Now the back line is tight and disciplined.

“The team in that sense has improved a lot. I think you can see a big difference from last year to this one,” Schelotto said. “Maybe we lacked unity, and now you see a team that supports each other.”

LAFC (3-2-3) is coming off a one-sided victory over San Jose on Wednesday, but that result didn’t fully mask the problems that surfaced in consecutive losses to the Galaxy and Seattle Sounders. Coach Bob Bradley changed goalkeepers, committing to Pablo Sisniega for the next several games, and started midfielder Latif Blessing at right back against San Jose. With Eduard Atuesta and Vela both sidelined with injury, however, the team misfired on more than 25% of its passes and had the ball less than half the game.

Now LAFC, a team that, more than most, feeds off the environment, continues its search for solutions in a crosstown derby that will be played in a silent, empty stadium.

“It’s still a weird feeling,” Bradley said. “And they’re all adjusting to make sure that when they step on the field, the intensity is at the highest level. We all know that the atmosphere inside stadiums drives the team. And without it, it just requires the mentality of players to be even stronger.

“So it still feels a bit strange, but we’re all working on making sure that we can handle it and be at our best.”