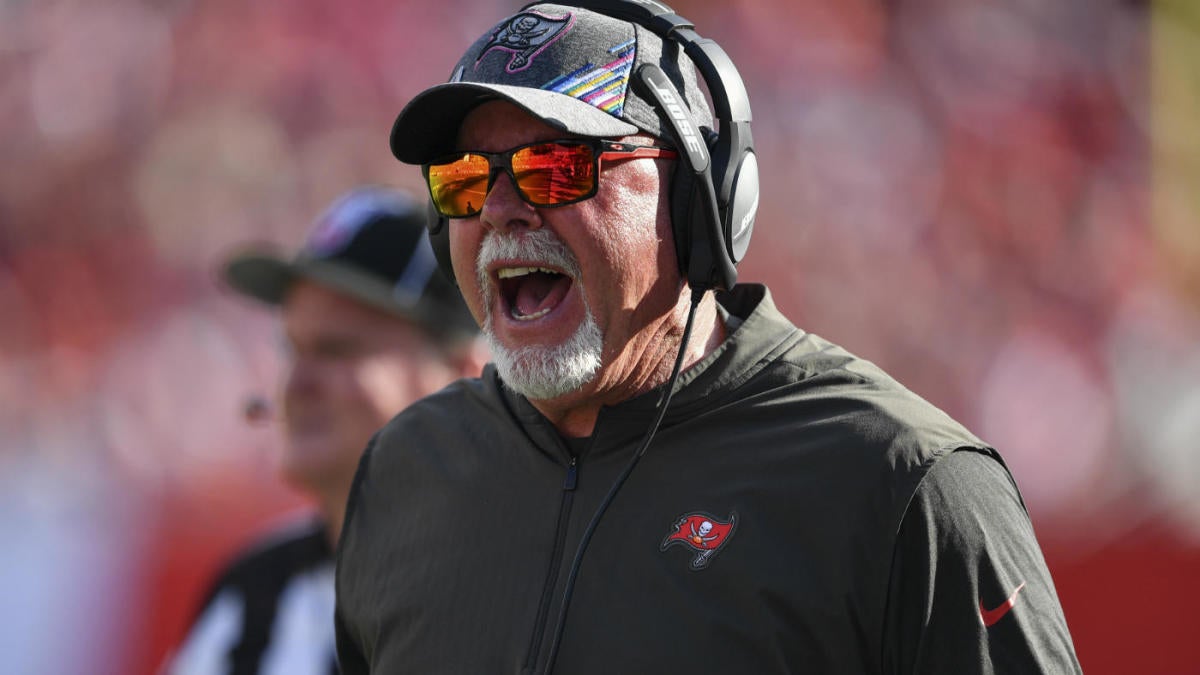 The Tampa Bay Buccaneers have enjoyed quite the glow-up in 2020. After a 7-9 finish last year, the Bucs jumped into the offseason with the clear intention of improving the quarterback position. They struck gold in free agency, landing the biggest fish possible in Tom Brady, who inked a two-year deal with the club. Along with landing the six-time Super Bowl champion, Tampa was also able to coax legendary tight end Rob Gronkowski out of retirement and force a trade to the Bucs. Wowza.

Tampa Bay is now poised to look completely different in 2020 as the addition of Brady thrusts open a Super Bowl window for Bruce Arians’ club, especially after adding Leonard Fournette. While this unprecedented offseason has stripped us of a normal minicamp and OTAs where we would have seen key roster battles commence and seen which way the team was initially leaning, we decided to take an early stab at projecting who will be working with the first-team offense and the rest of the depth chart on the roster.

For the purpose of this discussion, we’ll be projecting the depth chart up to the top four players at a given position. Tampa Bay, like every club in the NFL currently, has a crowded 80-man roster, but that will be cut to a 53-man roster on Saturday, Sep. 5. This is merely a snapshot of where we are today with this bloated roster.

Tom Brady, of course, is the unrivaled starter in the Tampa Bay offense, but I do think the re-signing of Blaine Gabbert will be especially beneficial for the Bucs. The veteran has worked with Arians in both Tampa and Arizona, starting five games for him with the Cardinals in 2017. In this time where face-to-face gatherings with the team are limited, Gabbert could be an asset to Brady to help him mold into Arians’ system a bit more seamlessly.

At the pass-catching spots, Mike Evans and Chris Godwin are still the one-two punch, but Tampa Bay did lose Breshad Perriman to the Jets in free agency, leaving 69 targets up for grabs. It’d be somewhat poetic for tight end Rob Gronkowski to take all of those, but I do expect Scotty Miller to possibly take a leap in his second year in the league. Fifth-round pick Tyler Johnson should also figure into the mix.

Speaking of Gronkowski and the tight ends, that position historically doesn’t mesh well in Arians’ offense, but the head coach will likely cater some of his stylings to fit in with Brady, who has made a killing with Gronkowski and a number of other tight ends over the course of his career with the Patriots. Because the Bucs have three capable tight ends, it wouldn’t be surprising to see Arians include more two tight ends sets in his offense in 2020.

Along the offensive line, the story revolves around first-round pick Tristan Wirfs, who’ll likely immediately come in and start at right tackle.

Continuity is the key word when speaking about the Buccaneers offseason as it relates to the defense. The club was able to keep intact its front seven, a unit that was the best in the league at stopping the run. Shaquil Barrett was hit with the franchise tag, while Ndamukong Suh re-signed with the team on a one-year deal and Jason Pierre-Paul re-upped with a two-year, $27 million extension. Tampa Bay did lose nose tackle Beau Allen in free agency and rookie Khalil Davis, selected in the sixth round out of Wisconsin, should slot in as the possible backup to Vita Vea. 2019 first-round linebacker Devin White should only get even better as he enters his second year in the league as well.

In the secondary, the Bucs did add safety Antoine Winfield Jr. in the second round, which could be a steal. He very well could inch into the starting rotation by the time the 2020 season is in full bloom. Winfield Jr. is physical safety that can play in the box and take on tight ends and receivers in the slot. Corner Carlton Davis is also worth watching as he heads into his third season in the league. In 14 games played in 2019, Davis totaled 19 passes defended, which was only outdone by reigning Defensive Player of the Year in Stephon Gilmore of the Patriots. With that lethal front seven still attacking opposing offenses, Davis and the rest of the Bucs secondary should be freed up to make some plays at the football.

A potential kicking competition between Matt Gay and Ryan Succop is the big story surrounding Tampa Bay’s special teams unit. Gay was selected in the fifth round of the 2019 draft and completed 77.1% of his field-goal attempts. He also netted 89.6% of his extra points. It was a good, not great rookie season, which did feature some inconsistencies. Because of that, GM Jason Licht decided to add Succop.

Given the draft capital used on Gay, the Buccaneers certainly want to see him thrive with the franchise, but clearly they think it’s best to push some competition on him to see what he’s made of.