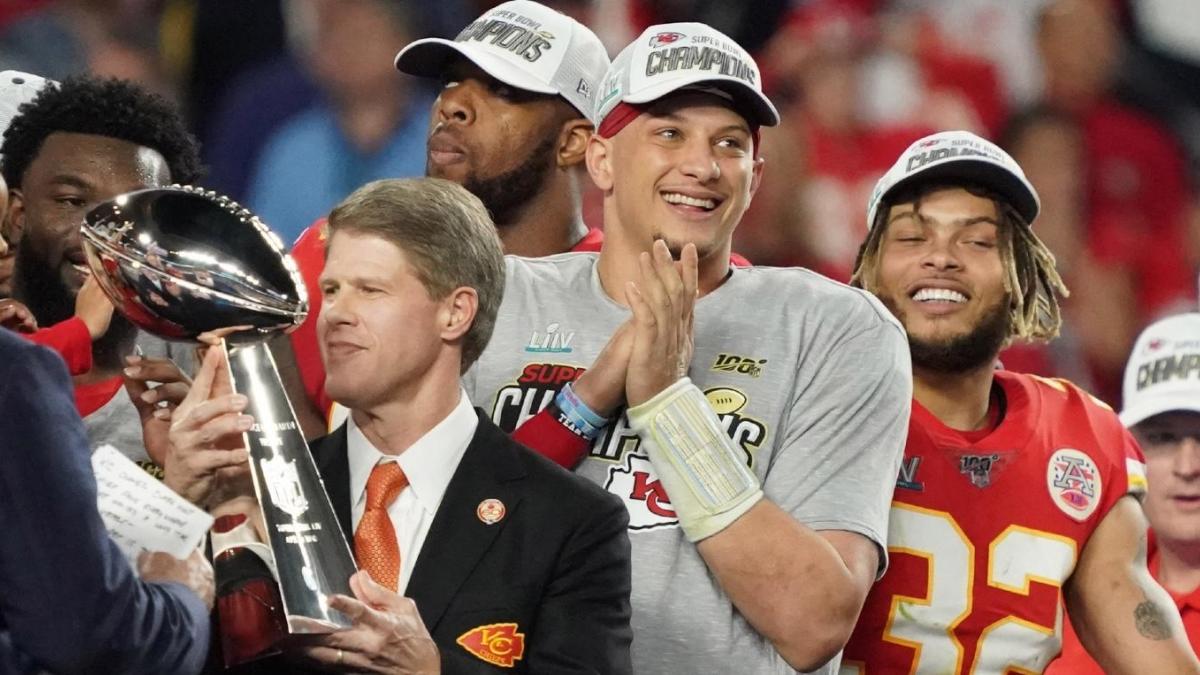 Watch Now: Tiki and Tierney: Will the presence of fans give NFL teams a competitive advantage? (2:15)

Patrick Mahomes, upon receiving his Super Bowl championship ring Tuesday night, slightly adjusted his mask before slipping the ring onto his finger. That’s life in the year 2020, as Mahomes and the Chiefs found a socially distant way to celebrate their victory in Super Bowl LIV.

Nearly seven months to the day after defeating the 49ers 31-20 to win the franchise’s first Super Bowl in 50 years, the Chiefs’ players and staff occupied their own tables — six feet apart — on the Arrowhead Stadium turf. One by one, members of the Chiefs’ organization were handed their ring from team chairman/CEO Clark Hunt.

Here’s a closer look at the makeup of the Chiefs’ ring, which was created by Jostens, the same company that made Kansas City’s rings after they defeated the Vikings in Super Bowl IV, 23-7.

The inside of the ring also included the score of each of the Chiefs’ playoff victories. Below the logo of each team the Chiefs defeated in the playoff is a number indicating the amount of points Kansas City had to come back from, as they are the first team in NFL history to win three playoff games after trailing by at least 10 points.

“To become Super Bowl champions is an amazing feat, and to be trusted to create a ring to celebrate that achievement is truly an honor,” said Chris Poitras, the VP and COO of Jostens Professional Sports Division. “We have had the privilege to partner with the Chiefs to craft not only their Super Bowl LIV Championship ring, but their first ever Super Bowl ring as well. This ring truly celebrates the Chiefs history, their fans and the incredible success of the 2019 season.”

Now that they have officially received their rings, the Chiefs will now look to become the first team since the 2003-04 Patriots to repeat as Super Bowl champions. Mahomes, the first player in league history to win a Super Bowl, Super Bowl MVP and league MVP before his 25th birthday, is not necessarily feeling the pressures associated with being the defending champion.

“I don’t think there is [pressure], honestly,” Mahomes told CBS Sports’ Jeff Kerr shortly after signing his record-setting extension earlier this offseason. “Obviously we have a great football team and I’m always trying to go out there and be the best player and person I can be every single day. But I think when you have great players around you, you can lean on those guys. And you know you’ve done it before, you know what it takes to do that every single day.

“It’s going to be hard. Winning the Super Bowl is not an easy thing. A lot of people don’t get to do that in their lifetime and I know that. I’m just going to take advantage of every single opportunity that I have every single day and hopefully have another opportunity to be in a Super Bowl and try to find a way to win it again.”