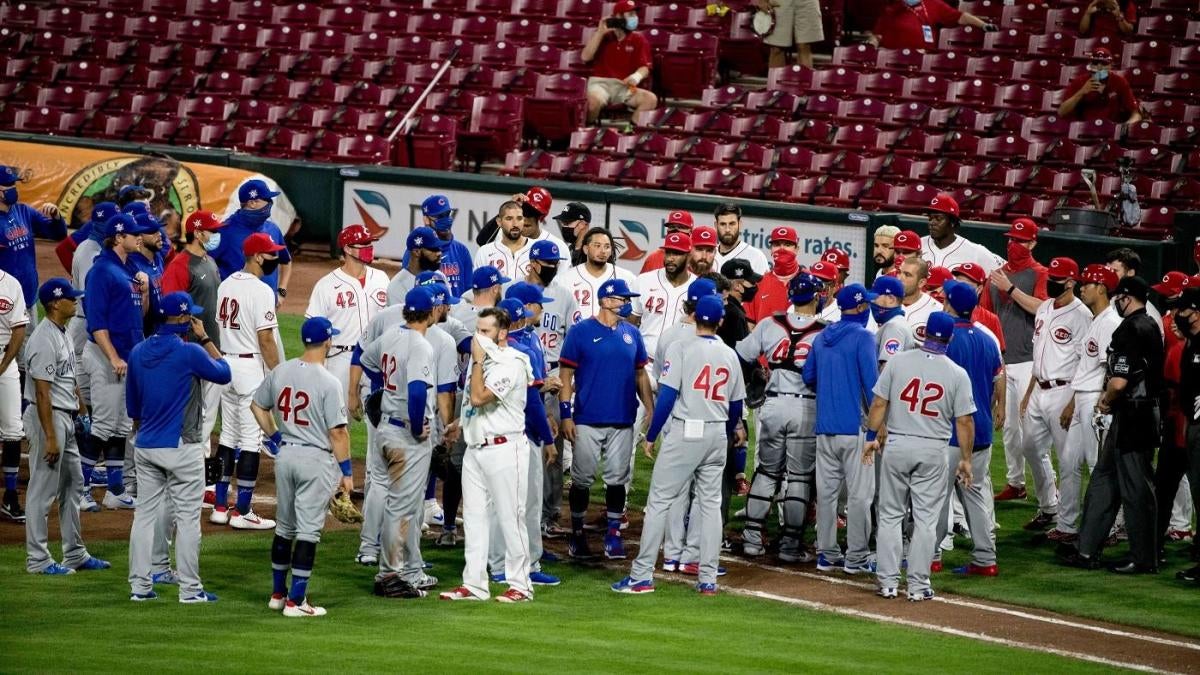 Watch Now: Highlights: Cubs at Reds (1:41)
Words — perhaps of the naughty variety — and quasi-jostling were exchanged, and the benches and bullpens both emptied. While COVID-19 best practices were not observed, at least no punches were thrown. In the top of the fourth, Cubs manager David Ross and associate pitching coach Mike Borzello were both ejected — congrats to Ross on his first career managerial ejection — and both benches were warned. With that warning in place, it’s not surprising that first base umpire Dan Bellino had a quick trigger when the Reds in the bottom of the fourth spilled onto the field with ill intentions. Please admire said quick trigger:
As you can see, Antone was immediately shaking his hand afterward, so perhaps it was a misfire and not a true purpose pitch. Whatever the case, throwing near a batter’s head, even if unintentional, often leads to a reprisal, and that’s perhaps what happened in home half of the fourth when Adbert Azolay of the Cubs found a similar location against Shogo Akiyama of the Reds. Soon thereafter, the benches cleared:  The Reds struck the most vital blow in the seventh, as they plated two in the final frame off beleaguered Cubs closer Craig Kimbrel (he of the now 10.13 ERA) and won it on a walk-off wild pitch:  So with Joey Votto, Jesse Winker, and Cincy manager David Bell given the heave-ho, that makes five ejections.  Yes, that happens to be Saturday’s second walk-off wild pitch.
It all started when Reds rookie Tejay Antone came in high and tight to Cubs first baseman Anthony Rizzo, who homered twice in the first game, in the fourth inning: The Cubs on Saturday split a doubleheader with the divisional rival Reds in Cincinnati (Game 1 box score | Game 2 box score). That’s the most important thing, but the leading subplot is the near-brawl that broke out in the second game.