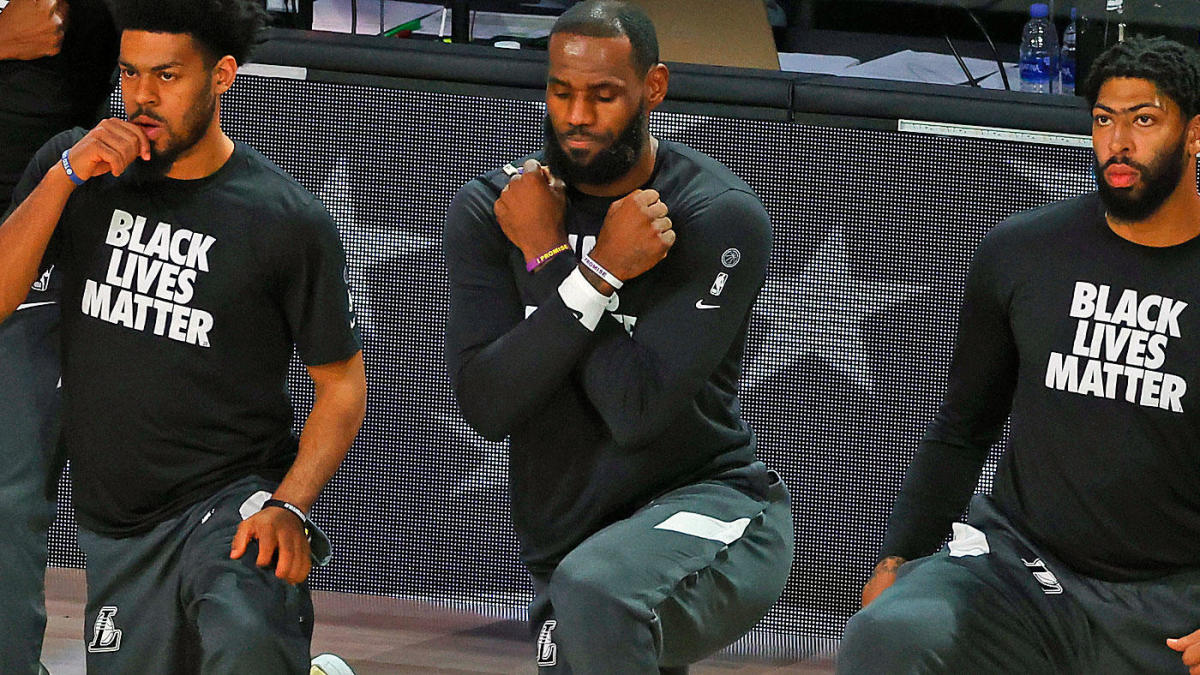 Players looked a little rusty, but that’s no surprise given what they’ve been through over the past week. The six NBA teams that took the court on Saturday hadn’t played since Monday, but the emotional exhaustion that crescendoed with the Milwaukee Bucks choosing not to play their scheduled game on Wednesday and reverberated throughout the rest of the week far outweighed any physical inadequacies.

In terms of the scores, we essentially ended up with three blowouts — the Bucks handily eliminated the Orlando Magic, the Houston Rockets pulled away from the Oklahoma City Thunder to take a 3-2 lead in their series and the Los Angeles Lakers sent the depleted Portland Trail Blazers packing.

But this day was about much more than basketball.

While stars like LeBron James (36 points, 10 rebounds, 10 assists), Anthony Davis (43 points, nine rebounds), Giannis Antetokounmpo (28 points, 17 rebounds in 28 minutes) and James Harden (31 points in 28 minutes) showed everybody why we missed watching NBA basketball, players were sure to remind fans exactly why they stopped playing on Wednesday through social justice messages and constant reminders that our work as a country is nowhere near complete.

Following the Bucks’ victory, Antetokounmpo relayed how he had received some chilling advice from former teammate Caron Butler as a wide-eyed rookie living in the U.S. for the first time.

“Over here is different. You’ve got to be careful,” Antetokounmpo said. “Obviously we’re athletes, we’re big, tall and all that. Caron Butler told me that when you walk down the street, take off your hoodie. I was like, ‘Why?’ … I didn’t understand it then, but I understand it now.”

Fresh off eliminating the Blazers, James said there was “some doubt” earlier in the week about whether the players would continue in the bubble, and shared some poignant words about the tumultuous last few days he and his fellow players have worked through.

“It’s great when you can put together a plan, have action and execute it. That’s what we’ve been able to do over the last few days.” James said, referring to the three-point plan the NBA and NBPA announced on Friday after a series of discussions. “It’s great to be back on the floor, but more importantly it’s great to be able to have a game plan, be able to execute it, and then be able to put it in action right away.”

As if the social justice issues of the past week weren’t enough, the league and its players faced further tragedies with the recent deaths of former NBA All-Star Clifford Robinson, former University of Arizona coach Lute Olson, whose program produced countless NBA players, and actor Chadwick Boseman, who has appeared at events like the NBA Slam Dunk Contest and on TNT’s “Inside the NBA.”

Each of Saturday’s games began with a moment of silence in honor of all three individuals. The Blazers all wore headbands as a tribute to Robinson, who played his first eight seasons in Portland while sporting his trademark headwear.

Boseman, whose portrayal of T’Challa in “Black Panther” and prominent historical Black figures such as Jackie Robinson and Thurgood Marshall have inspired moviegoers across the country and beyond, received a special tribute from James, who crossed his arms across his chest while on a knee prior to the game in typical Wakanda fashion.

Every coach who was interviewed between quarters made mention of either the NBA’s work on the social justice front or the passing of one of those esteemed figures. It was a strong reminder that, while we’re all overjoyed to be able to watch NBA basketball again, the players and coaches aren’t going to forget why they’re here.

According to many players, the consensus during their meetings was that they can affect more change by being in Orlando than they could as individuals in their hometowns. Saturday’s return to play was a great example of how they can keep the message alive, and how their work off the court is more important than their work on it.

“I believe that guys like myself have a platform that we can find ways to impact and inspire as many people as possible,” said Russell Westbrook, who made his return from a quad injury in the Rockets’ win over the Thunder. “My legacy’s going to be based on how much I give back to my people, how much I give back to the community, how much I find ways to be able to help kids in the inner city — inner city youth. That’s all I worry about. Basketball will take care of itself.”