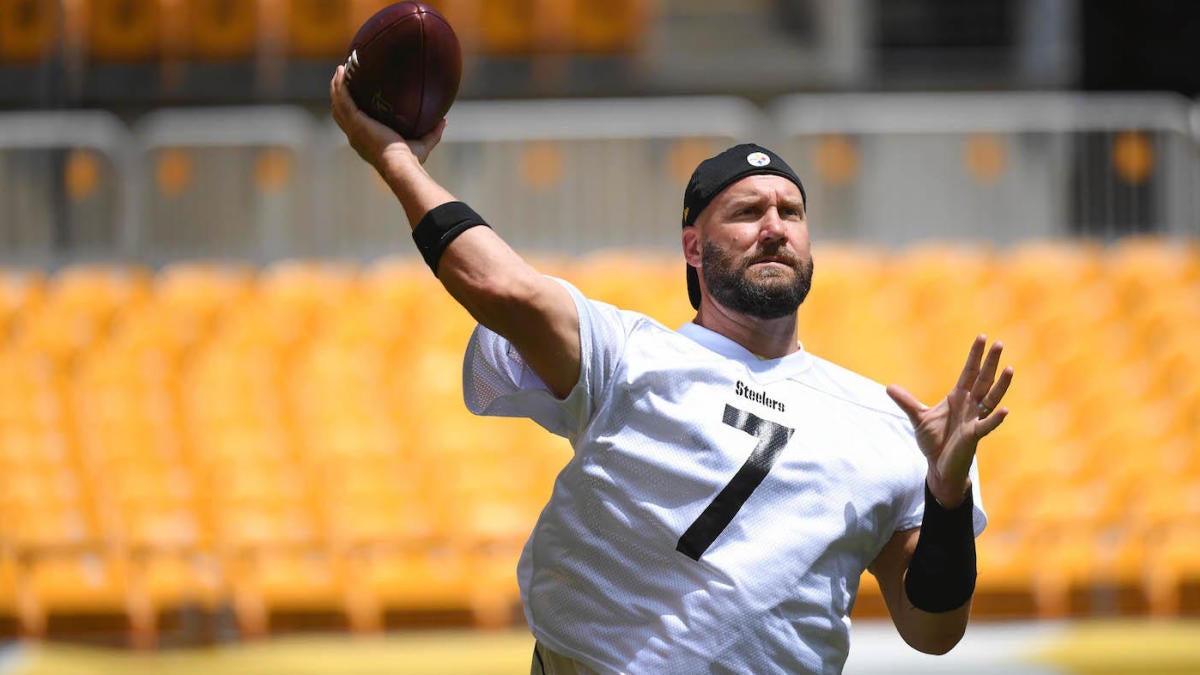 Naturally, this kind of ranking still puts most of the real-life contenders near the top of the list. The Baltimore Ravens, our No. 1 team, for example, are both one of the betting favorites to win it all and clearly one of the best teams of this summer, thanks to solid practices from their starting lineup and a notable move to shake up their locker room.

But not everything is predictable in this special rundown. Some clubs, like the Las Vegas Raiders, are quite a bit higher than you might expect, solely because the talk of the town is, well, things have gone well for them in camp. (Didn’t you hear? Derek Carr has finally “taken over the team” entering his seventh year in the league.)

So let’s have some fun. Here’s a look at how all 32 teams stack up based on what’s gone down in camp:

Lamar Jackson only just recently threw his first interception of camp. Marquise Brown bulked up. Team leaders quickly but wisely escorted Earl Thomas — sluggish on the field, distracting off it — out of the locker room. This team is locked and loaded.

So much for Drew Brees’ offseason controversy derailing their unity. The offensive firepower has stayed healthy, the retooled defense has been energetic, and there’s not enough talk about how well stocked they are for a title run.

Looking for some late-round picks that could win your fantasy league? Establish The Run’s Evan Silva joins Will Brinson on the Pick Six Podcast to break down that and more fantasy tips; listen below and be sure to subscribe for daily NFL goodness.

Russell Wilson is feeling good. Pete Carroll is throwing shade. Jamal Adams is now part of their defense. Chris Carson is ready to go. Poke fun at their old-school game plans, but few teams are as confident as this one right now — and can back it up.

No news is good news for America’s Team, and outside of maybe Gerald McCoy’s unfortunate injury, the ‘Boys have stayed out of the headlines, with Dak Prescott, CeeDee Lamb and a loaded offense ready to explode come September. (Cue the Earl Thomas drama!)

It all comes down to this: Ben Roethlisberger is healthy. As a bonus, so is James Conner. The Steelers already own one of the NFL’s top defenses, so if Big Ben’s camp condition is any indication of what’s to come, Terrible Towels will soon be waving across America.

What more must we say other than Tom Brady is here? Bruce Arians’ plan to recreate a makeshift 2014 Pro Bowl roster has its flaws, but still, it’s hard to watch No. 12 throwing to Mike Evans, Chris Godwin, Rob Gronkowski and O.J. Howard and come away unexcited.

Make no mistake: They’re still No. 1 or 2 in actual power rankings. But losing Laurent Duvernay-Tardif and Damien Williams weren’t necessarily small changes. By Week 1, Patrick Mahomes and Co. will prove that camp headlines don’t mean anything.

Aaron Rodgers has been saying all the right things since Jordan Love’s surprise arrival, and now it’s incredibly clear, in practice, why Rodgers is still the guy. Does anyone understand how fired up this guy is going to be to prove he’s still MVP material?

Philip Rivers is having fun again. Jonathan Taylor is a beast. And while Parris Campbell suffered an injury scare, everything else seems to be clicking as expected. We just might be underrating Frank Reich’s squad here.

Tyrod Taylor certainly didn’t seem that exciting entering camp, but he’s lit up his supporting cast with the deep ball as of late. Austin Ekeler is his typically shifty self. And the defense has a swagger to match the talent. An underrated contender?

At this point, the Cards hype might be a tad overblown. But then players started raving about how Kliff Kingsbury is running the offense at a “crazy fast” pace. The Kenyan Drake walking boot is a little concerning, but this is still an electric bunch.

Somehow, some way, Derek Carr is out to prove the haters wrong again. But this time he’s actually got a supporting cast. Tyrell Williams’ injury isn’t minor, but the way they filled out the RB and WR groups has already paid dividends on the practice field.

You might think the Jarrett Stidham injury would send them falling down the rankings, but we all knew Cam Newton was winning this job anyway. The defense, meanwhile, is dominating practice, which should be music to their ears considering their 2020 approach.

There’s no denying their firepower, but these WR injuries are starting to hurt. Presently, these are the only fully healthy wideouts on the roster: Kendrick Bourne, Trent Taylor, Dante Pettis, Tavon Austin, J.J. Nelson, Kevin White. It’s like a cast of forgotten faces!

You’ve got to hand it to him: Sean McVay makes one heck of a Jon Gruden on “Hard Knocks.” Oh yeah, and Aaron Donald is still freakishly good. Having a healthy WR corps, including Cooper Kupp, has rendered them still relevant in the West.

The Drew Lock hype has been just loud enough. Considering how much change Denver is working with on the coaching staff, it’s safe to say John Elway’s squad is moving in the right direction. The K.J. Hamler hamstring injury hampers them a bit, though.

Until they make the right move and cover up the Vic Beasley move by adding Jadeveon Clowney, they don’t deserve anything higher.

D’Andre Swift’s leg injury is something to monitor, and Matt Patricia does not deserve the benefit of the doubt, but he scored some serious locker-room brownie points by helping the Lions take the first big stand, at least in the NFL, after the Jacob Blake shooting.

Newcomers like Jalen Reagor have, by all accounts, blended well with Carson Wentz and a redesigned offense. Miles Sanders has been sidelined for a while with a “precautionary” designation, though, and losing left tackle Andre Dillard was obviously notable.

They finally, officially lost Everson Griffen, who doesn’t get enough credit for what he did opposite Danielle Hunter. And now, suddenly, there’s talk of first-round WR Justin Jefferson taking a slow path to No. 2 WR duties. Call it a so-so stretch in the Midwest.

Matt Rhule has this group clicking behind the scenes. Don’t you dare count them out for a run at .500!

Tua Tagovailoa is on their practice field, folks. That is enough to be juiced up about this franchise. But everything else seems to be moving at a slower pace, from the rehabbing WRs to the transitioning CBs — like big-money Byron Jones, who’s catching up on “D.”

It feels like half the talk coming out of Falcons camp has centered on new tight end Hayden Hurst. It’s hard to tell whether that’s a good thing or a bad thing.

It wasn’t just an injury bug that infested Cleveland. It was the whole hive. Nick Chubb is apparently fine after a concussion scare, and the offense is still due for a rebound, but it’s hard to ignore big losses like Grant Delpit and Greedy Williams on the other side.

This might be resolved come Week 1, but why in the world has their QB competition been so quiet? For Pete’s sake, if Mitchell Trubisky won’t step up now, when will he? Meanwhile, Matt Nagy is basically begging for more kicker drama to unfold.

Not going to lie: Joe Judge taping tennis balls to defensive backs’ hands was pretty clever. But if he keeps up the tough-guy stuff, this team’s going to literally be running through brick walls by September. They can’t afford that after so many injuries and opt-outs.

Joe Burrow is soaking up the praise, which is great, but can we go one week without another A.J. Green injury? Couple that with arrests and/or physical ailments for big additions Trae Waynes and Mackensie Alexander, and the arrow is pointing down.

Maybe Gardner Minshew won some more fans by … joking that he’s invincible in the face of a global pandemic? But this team is largely uninspiring, starting with the fact one of their best players, Yannick Ngakoue, still refuses to play for them.

Good on Joe Douglas getting a bunch of nice draft picks for Jamal Adams, but what else garners applause here? Sam Darnold joking about staying out of bars? Adam Gase putting himself on a track to start a 54-year-old Frank Gore over Le’Veon Bell? Yikes.

Alex Smith making a miraculous comeback is a great story, but holy smokes, talk about an apocalyptic summer. From bombshell harassment allegations to high-profile cuts to internal strife to a literal team re-branding, these guys are like walking TMZ headlines.