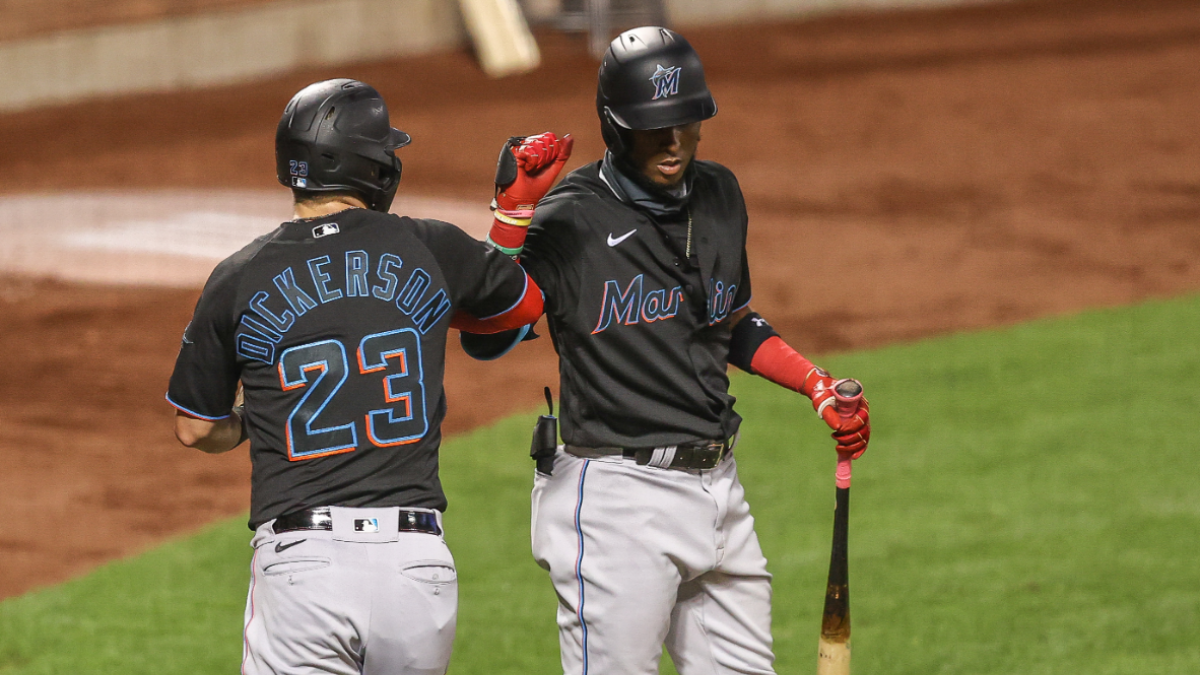 Watch Now: Highlights: Marlins at Mets (2:06)
SportsLine gives the Marlins a 27.6 percent chance of making the playoffs while Fangraphs has them at 30.7. They are absolutely in the discussion thanks to their good play, the poor play of a litany of other expected contenders and the expanded playoff field.
When the Miami Marlins returned from their COVID-19 outbreak, they got hot enough to start the season 7-1. At the time, most of us figured they’d come crashing back to Earth soon enough. They sort of did, too, losing eight of their next 10. They have, however, been able to win five of their last eight and there are circumstances all around the situation that say there is a legitimately realistic path to the playoffs for the club with the longest NL postseason drought (2003).

The expectation when this was to be a 162-game season was that the Braves and Nationals were the legitimate contenders while the Phillies and Mets were also likely to have a good shot at making the playoffs. The Braves are playing as expected. The Nationals are 11-17 and just as much a mess as that record would indicate. The Phillies have one of the worst bullpens we’ve seen in a while and are 12-14. The Mets are 13-16 and definitely can’t be counted on for consistent winning baseball for myriad reasons.

Add all that up and there’s a very real path to second place, which would likely put the Marlins as the six seed. Heading into Thursday, SportsLine had the following win totals in the projections:  The banked 14-12 record as they near the halfway point helps. But here are three other reasons why Miami could sneak into the 16-team playoffs this October. Let’s have a look:

There is a possible problem, though. The Marlins play the Rays six times, the Yankees three times and the Braves seven more times. Those are going to be awfully tough games for a roster like the Marlins are fielding. They have stayed above water to this point, though, and they’re almost halfway home.

3. Struggling ‘contenders’ in other divisions

If there’s a margin for error, the Marlins are in it. They can steal a game or two. It’s possible. If they do, second place. Playoffs.  In doing so, they have created a situation where they have a real chance of making the playoffs. If the Marlins do miss out on the second-place slot in the East, there are still two wild cards. Let’s remove the Dodgers, Braves, Cubs, Cardinals and Padres in addition to the other three NL East teams I listed above. Here’s who is left for the Marlins to compete with for the wild card and their projected win totals heading into Thursday.

On Fangraphs it was:
Fangraphs:
If we were still under the five-team per league playoff format, I wouldn’t be writing this. I’m pretty confident the Marlins won’t win the NL East and there’s a good shot they won’t have the first- or second-best record of the non-division winners by the time we get 60 games in (I’ll take the Padres and whoever doesn’t win the Central between the Cubs and Cardinals). Now, however, there are eight teams per league and it even helps the Marlins that the second-place team in each division makes the playoffs no matter its record. There are also two wild cards after the first- and second-place teams.