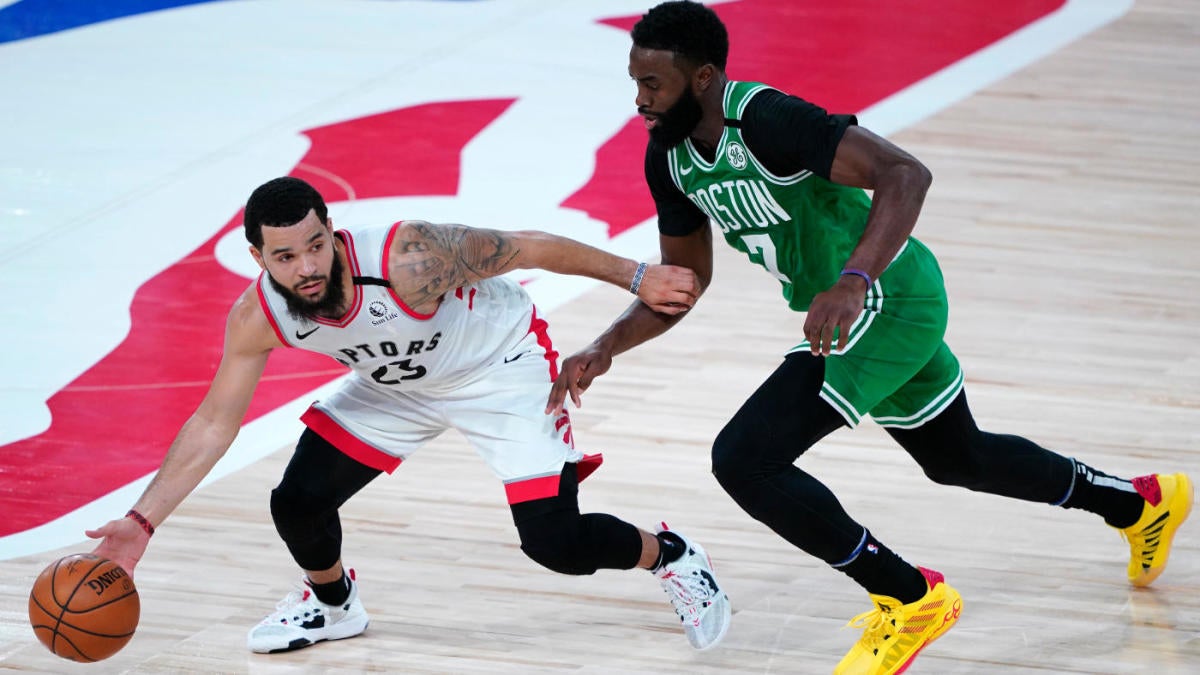 The Boston Celtics are coming off a fairly easy first-round matchup where they swept the Sixers in four games, not allowing the shorthanded Philadelphia team a chance to steal even one game. Meanwhile, the Raptors executed their own sweep, but it wasn’t easy as the scrappy Brooklyn Nets made life difficult for Toronto on more than one occasion to squeeze out four wins. Both teams though took care of business and will meet in the Eastern Conference semifinals for a series that is incredibly evenly matched and should provide many exciting finishes.

The series is slated to start on Thursday, however, both teams have discussed the potential to boycott Game 1 in response to the shooting of an unarmed Black man named Jacob Blake in Kenosha, Wisconsin on Sunday. Nothing has been decided yet, though The Undefeated’s Marc J. Spears says that both teams are expected to meet tonight to make a decision on what type of statement they plan to make.

If Game 1 is postponed, then the schedule will be pushed back, but as of right now, here’s how it stands. In addition to three things to know ahead of the Raptors-Celtics matchup.

While Tatum took awhile to get going during the seeding schedule in the bubble, he had no difficulty scoring at will against the Sixers. In four games, he averaged 27 points, 9.8 rebounds and 2.5 assists while shooting the ball extremely well from the field (48.7 percent) and deep (45.2 percent). He took advantage of Philly’s defenders every single game, as they had no real way to slow him down.

This could likely change against the Raptors, a much more defensively stout team than a Sixers squad that was without their best defender in Ben Simmons. In four games against the Raptors this season, Tatum was held to under 20 points in three of those matchups. On their Christmas Day matchup, Tatum put up just 11 points, as the Raptors threw an array of different defenders at the Celtics star to make him uncomfortable. Boston will surely try to get switches for smaller guys like Kyle Lowry and Fred VanVleet to guard Tatum, however, Lowry’s veteran savvy and all-around pesky defensive nature isn’t all that ideal for Tatum when he’s trying to drive to the basket or pull up for a jumper.

Still, though, Lowry has been the main defender on Tatum the most this season, and in that time the All-Star point guard has matched up on him, Tatum has shot 63.6 percent from the field. That certainly isn’t what Toronto wants, and will look to OG Anunoby to pick up the tough assignment of guarding Tatum.

Just as they did in the regular season, the Raptors flexed their muscle against the Brooklyn Nets in the first round with their transition offense. This team wants to get out and run on offense, and if they can create a miss or a turnover, they’re incredibly dangerous in the open court. Toronto averaged a league-leading 18.8 points per game in transition in the regular season, with Pascal Siakam ranking seventh in the league in points scored in transition per game (5.5).

It’s not just Siakam, though, who’s dangerous in transition. As soon as Toronto grabs a rebound or secures a steal, the team is off and running to the other end of the floor, with multiple options present to score. It could even be a two-on-three situation and the Raptors would still have the upper hand because of their ability to know where each other are and what spots to pick on the floor to put the team in the best position to get a bucket. It doesn’t even have to be off a miss or a steal, if the Raptors sense any lapse from the defense, they’re charging at full speed toward you and it’s incredibly difficult to stop. Kyle Lowry and Fred VanVleet can get you with the transition 3-pointer, or the drive and kick out to someone on the wing, or Siakam can break the defense down on his way to the bucket for an easy two points. Boston is going to have its hands full trying to contain the explosive offense that the Raptors have, but it helps that the Celtics allow the least amount of transition points in the league (4.8). It’s going to be two strong forces going at it in this series, which will surely create some exciting, competitive games.

3. Which coach will make better adjustments over the course of the series?

Nick Nurse — who was just named Coach of the Year — is perhaps the best in the league at making on-the-fly decisions, but Celtics’ coach Brad Stevens is no slouch either and is also heralded for his great basketball mind. As much as this is a matchup between the supremely talented players on the court, it’s also about what the coaches do over the course of this series. Nurse is a great sleight of hand coach, distracting the defense with off-ball movement that will make them slip up and miss a simple backdoor cut to the basket or an open lane to the rim. The Celtics will need to make sure that they’re communicating on switches, otherwise, it may lead to an open guy on the 3-point line, where Toronto sinks 3s at a 37.4 percent clip, which ranks fifth in the league.

On the other end of that, though, is how the Raptors will handle the incredible depth that the Celtics possess. Even without Gordon Hayward, who will likely miss the majority of this series, Boston has what feels like an unlimited number of guys who can get a bucket. The Celtics will surely try to take advantage of the size that the Raptors have, and pull Gasol and Ibaka out to the perimeter to defend. If that happens, I’m not liking Toronto’s chances against guys like Tatum, Kemba Walker and Jaylen Brown who have the ability to punish bigs like Gasol and Ibaka. Both teams will try to expose each other’s weaknesses over this series, and it’ll be intriguing to watch two of the leagues best coaches go head-to-head in trying to combat that.