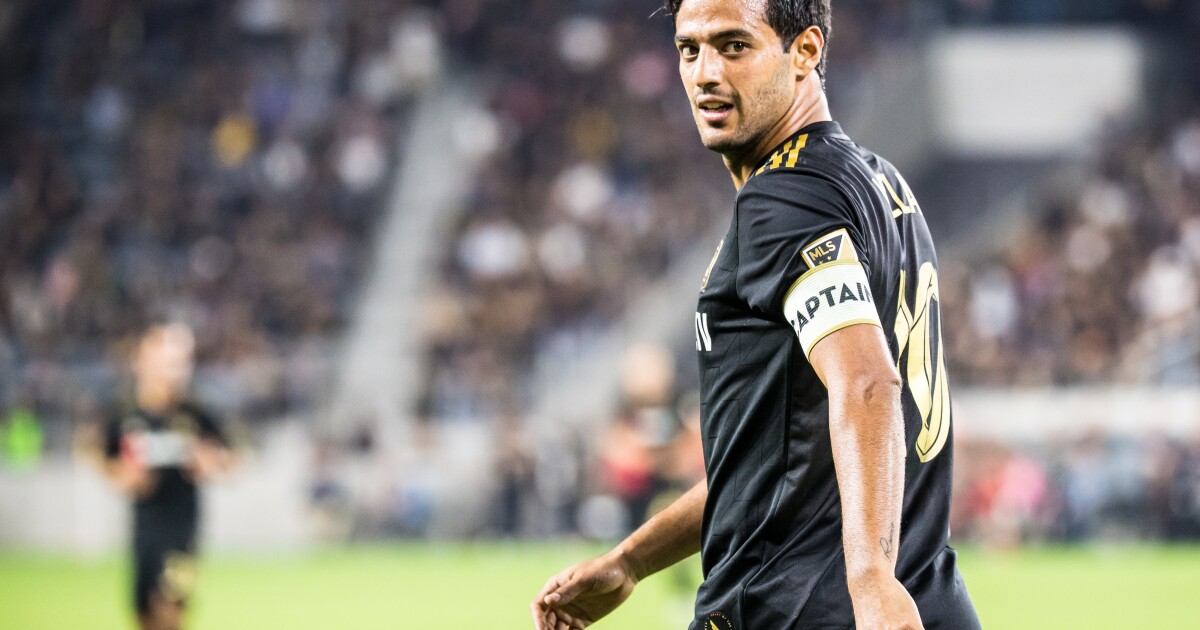 Less than an hour after getting Carlos Vela back, LAFC is once again without Major League Soccer’s reigning MVP, who is sidelined indefinitely with a sprained medial collateral ligament in his left knee, according to the team.

Vela has a Grade 2 sprain, which is considered a significant but incomplete tear. LAFC coach Bob Bradley said there is no timetable for Vela’s return although the expected recovery time is about a month.

“It’s an injury that we see in football many times,” Bradley said. “Now we just need to evaluate him week by week. Oftentimes with an MCL the player is able to start running straight ahead pretty quickly. But the time frame is really determined as he gets into more cutting, striking the ball as to how long it will take.

“So we don’t have an answer on that.”

Vela took himself out of in the 56th minute of Saturday’s 2-0 loss to the Galaxy, LAFC’s first setback of the season, shortly after his attempted shot was blocked by defender Emiliano Insua. The next time LAFC had the ball, Vela stretched to accept a pass from Latif Blessing with the outside of his left foot but pulled up immediately, bent over in pain and dropped to the turf.

The game was the first in more than five months for LAFC’s captain, who broke the league’s single-season scoring record with 34 goals last season. Vela played in the team’s first two regular-season games in March, scoring a goal in each, but skipped the MLS Is Back tournament in Florida to remain in Southern California with his wife, Saioa, who is nearing the end of a difficult pregnancy.

LAFC (2-1-3) will make its first trip of the regular season Wednesday, traveling to Utah to face Real Salt Lake (2-1-3). In accordance with the league’s COVID-19 protocols, the team will make the 85-minute charter flight early in the day, play the game, then fly back immediately afterward.

RSL is one of five MLS teams allowing spectators to attend its games but attendance at 20,213-seat Rio Tinto Stadium will be limited to 5,000. Fans will be required to wear masks and observe social-distancing rules.

Bradley Wright-Phillips likely will start in Vela’s spot at forward. With Adama Diomande having left the team earlier this month to rejoin his family in Norway, however, Bradley does not have a true forward with as much MLS experience on his bench.

LAFC also will be without defensive midfielder Eduard Atuesta, an MLS XI selection last year, who is recovering from an injury to his right foot.

The Galaxy, meanwhile, will play at home Wednesday for the first time since COVID-19 suspended the MLS season in March. They will face the Seattle Sounders (3-1-2), the defending league champions.

Saturday’s win was the Galaxy’s first of the season and the shutout was their first on the road in 14 months. But the game was just the first of five matches in 15 days for the Galaxy, so defender Daniel Steres said the team had little time to celebrate.

“It’s going to be a lot of games coming up real quick so momentum can play a factor,” he said. “You can say that’s all fixed and we got it right. But it’s just one game.

“It’s good to have another game this quickly because we can just continue what we’re doing instead of sit back and think on things.”

The Galaxy (1-3-2) have their own injury problems since they remain without striker Javier “Chicharito” Hernández, who tore a calf muscle during the MLS Is Back tournament last month. The team is hopeful he can resume regular training this weekend.