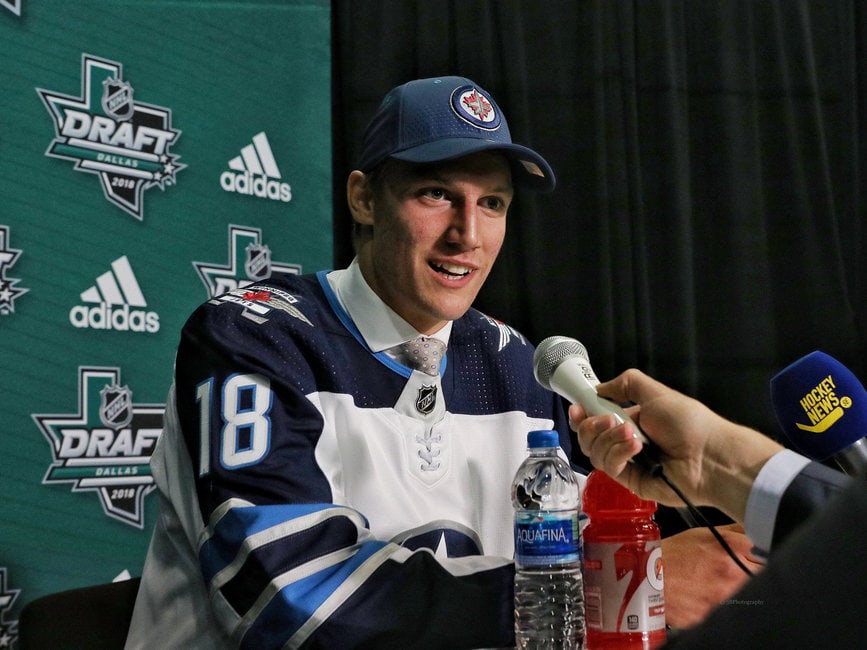 The Pittsburgh Penguins have signed a prospect to an entry-level contract. The Charlottetown Islanders have traded one of their draft picks. There is a rumour that the Winnipeg Jets will loan a player to Sweden and we take a look at a player who could surprise at the draft for our Prospect of the Day.

The Penguins announced that they have signed defenseman Josh Maniscalco to a three-year, entry-level contract. He went undrafted in his draft year but caught the attention of NHL teams over the past few seasons.

In the official press release, GM Jim Rutherford had this to say about Maniscalco: “Josh is a solid puck-moving, offensive defenseman. He jumps into the rush and plays a style that is complementary to our group. We think highly of his character and are happy to add Josh to the organization.”

The Islanders announced that they traded defenseman Angus Booth to the Shawinigan Cataractes for a 2022 2nd round draft pick. He was originally drafted by the Islanders in the fourth round (60th overall) in the 2020 QMJHL Draft.

Booth spent this past season playing for Laval-Montreal Rousseau Royal of the Quebec Midget AAA League where he managed to score one goal and added four assists for five points in 38 games.

Booth will get a great chance to continue to develop his game with the Cataractes this upcoming season. He makes smart plays with the puck on his stick and could get an opportunity to play some big minutes on an up and coming team.

There is a rumor circulating that the Jets are going to loan center David Gustafsson to Tingsryds AIF of the Allsvenskan. He was originally drafted by the Jets in the second round, 60th overall in the 2018 NHL Draft.

Gustafsson spent this past season playing for the Jets and the Manitoba Moose of the American Hockey League (AHL). In 22 games with the Jets, he managed to collect one goal, and in 13 games with the Moose, he managed to collect two goals and added five assists for seven points. He also represented his country internationally where he scored five goals and added eight assists for 13 points in 21 games.

Gustafsson will probably get the chance to make the Jets out of training camp come November. In the games that he played, he looked a little lost but as time goes on, he will get acclimated to the speed of the NHL. I really believe he has the chance to become a solid option for Paul Maurice and the Jets moving forward.

Prospect of the Day – Daniel Ljungman

For our Prospect of the Day, we will be taking a look at Swedish center Daniel Ljungman who impressed many people this past season. Currently ranked 39th amongst European skaters by NHL Central Scouting, he has caught the eye of many NHL scouts.

Ljungman spent this past season playing for Linkoping HC J20 where he managed to score 10 goals and added 13 assists for 23 points in 40 games. He also suited up in 13 games for his country where he collected seven goals and one assist for eight points.

Our own Eugene Helfrick believes Ljungman is a solid all-around prospect.

“Whenever you draft a player based on one breakout performance in an international tournament, there is a lot of risk involved. That performance may not be indicative of a player’s true potential, with their ceiling being potentially much higher or lower than expected.

Despite this, Ljungman appears to be a solid all-around prospect. He has an NHL skillset with the hockey IQ that could make him a productive bottom-six scorer that can take on meaningful special teams playing time.”

Time will tell how Ljungman will develop but he will no doubt attract a few teams who wish to select him at the draft. He has the chance to be a solid bottom-six player in the NHL and a team using a later round pick on him is a low-risk gamble in my opinion.