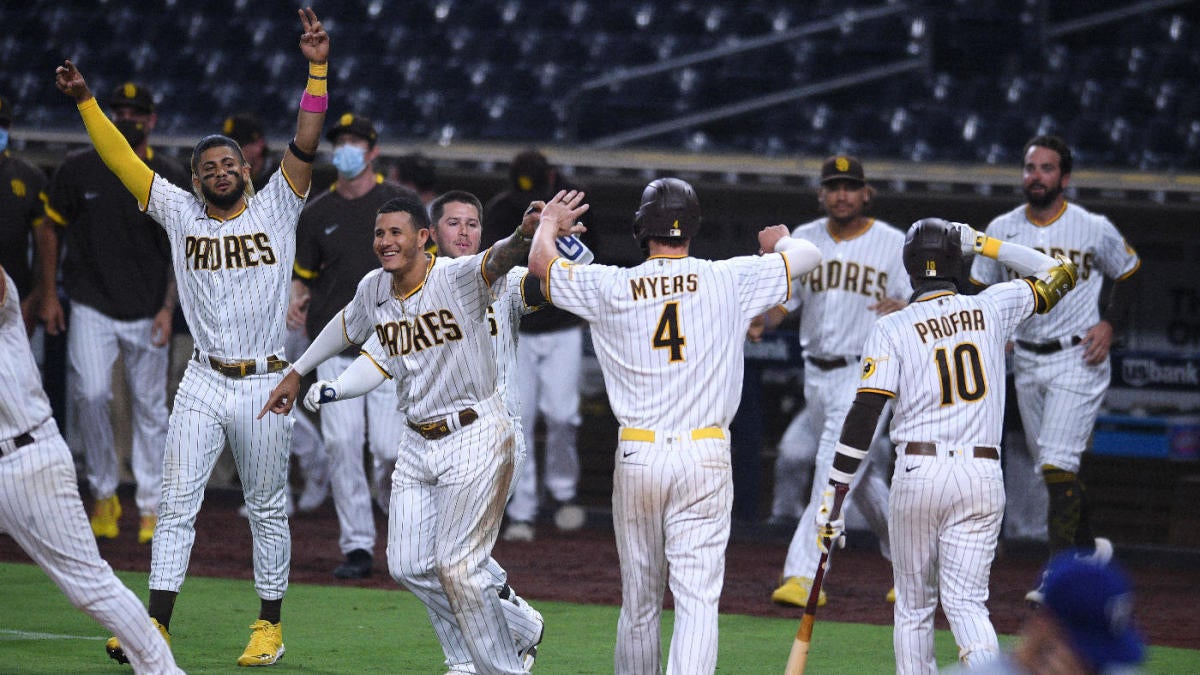 Watch Now: Highlights: Rangers at Padres (1:38)
Not only has the 11-1 stretch made the Rays a virtual lock for the postseason, it’s improved their AL East title odds considerably. Sportsline had Tampa at 25.0 percent to win the division before the season. It was down to 4.3 percent following the 6-8 start. Now it’s up to 40.2 percent, so that’s a 35.9 percentage point gain in two weeks. No other team improved their division odds close to as much as the Rays the last 14 days.
49.8%
The Rays are getting an MVP performance from Brandon Lowe, plus Willy Adames appears to be having a breakout season. The pitching has not been as formidable as expected — Tampa has a team 105 ERA+, putting them in the middle of the pack — though Tyler Glasnow started to turn things around last time out and Blake Snell is finally getting stretched out. The Rays were a good bet to make the postseason before the season. One month in, they’re now close to a lock.
68.2%No team has seen their postseason odds drop as much as the Angels the last two weeks and only the Red Sox (minus-53.2 percentage points) have seen their odds drop more since Opening Day. The second American League wild-card team is currently on pace to win 31 games. The Angels would have to go 23-11 in their final 34 games to get to 31 wins. Can they do it? Sure, it’s possible. Right now though, the Halos have given us zero reason to believe they have that kind of run in them. 17.5%
One month usually isn’t much in baseball. This season though, one month represents nearly half the season (363 of 900 scheduled games have been played, or 40.3 percent). The postseason outlook has changed quite a bit. Here, according to Sportsline, are five teams that have significantly moved their postseason odds this year, either good or bad.

51.2%
The top three seeds are the division winners and the next three seeds are the second-place teams. The final two spots go to the remaining teams with the best records. The first round (Wild Card Round) is a best-of-three series with all three games at the higher seed’s ballpark. The second round (LDS) is a best-of-five and the final two rounds (LCS and World Series) are best-of-sevens.

The good news: Colorado is still in postseason position and within striking distance of second place in the NL West. The bad news: the Rockies will play 10 of their final 35 games against the powerhouse Dodgers, plus another seven games against a talented Padres team. Those seven games against San Diego are an opportunity to wrestle away second place. Those 10 games against a Dodgers team has outscored their opponents by 2.4 runs per game? A potential nightmare.
What a difference a week makes. Last Sunday the Blue Jays blew a seventh-inning lead in the second game of a doubleheader and lost in extra innings to the Rays. It was their ninth loss in their last 13 games and it dropped them to 7-11 on the season. Toronto has rebounded with five consecutive wins though, including turning a 7-0 first inning deficit into a 9-8 win in the second game of Thursday’s doubleheader against the Phillies. It was a character win, for sure.
The Blue Jays are hardly perfect, and they’ll be without Bo Bichette (knee) and Ken Giles (elbow) for a while, cutting into their postseason odds. What they have going for them is weak competition. Right now the race for the second American League wild-card spot is between the Blue Jays, a Rangers team that just got dunked on all week by the Padres, an Orioles team that isn’t trying to contend, and maybe the Royals, Tigers, and Angels? Not the most imposing competition, to be sure.

It pains me that in a 60-game season with an expanded postseason field, Mike Trout (probably) still won’t get to play in October. What a shame. MLB should let the Angels rent Trout out to another team for the stretch run. Trout for a prospect and a player to be named later, then Trout goes back to the Angels as the player to be named later in the offseason. Something like that. Why not? We’re already playing seven-inning games and giving teams free baserunners in extra innings. Let’s get Trout in the postseason.
+23.2%
+14.7%

26.9%
The Slam Diego Padres were at it again Thursday night, becoming the first team in MLB history to hit a grand slam in four straight games. Fernando Tatis Jr. drew the ire of the Rangers by swinging 3-0 with the bases loaded and his team up seven runs in the eighth inning Monday night. The Padres responded by grand-slamming Texas into oblivion the rest of the week. No team in MLB has improved their postseason odds as much since Opening Day as San Diego.