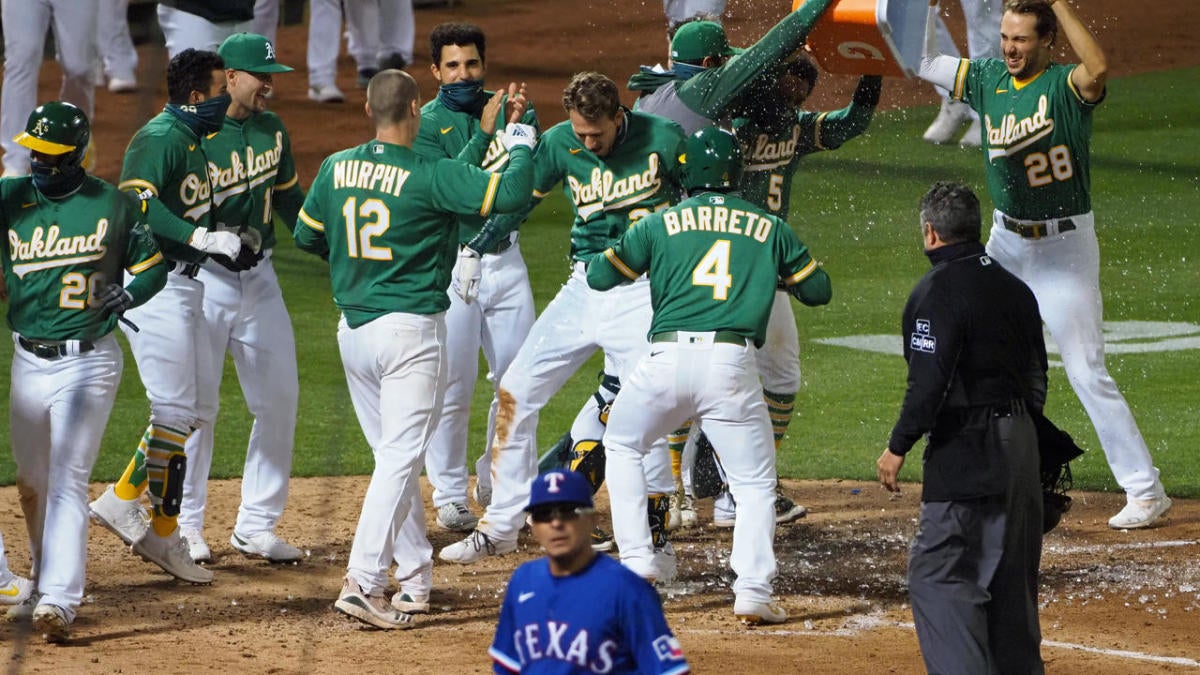 Watch Now: Highlights: Padres vs. Dodgers (1:22)
The historical Giants-Dodgers rivalry has been anything but across the last few seasons (Dodgers have won 37 of last 64 against San Francisco and seven straight division titles). As the Giants continue their rebuild, maybe we see the young and lively Padres take their place.
Oakland A’s pitcher Frankie Montas went on record saying he doesn’t believe the Astros “have their head in the game,” and reports have surfaced that Altuve is taking the aftermath of the sign-stealing scandal deep to heart. Altuve even asked manager Dusty Baker to drop him down in the lineup for Sunday’s contest.
Zack Greinke’s antics during this his last start are exactly why he’s such a treasure. Not only did he signal his pitch for all eyes to see, including the hitter Mauricio Dubon, he also discussed, so loudly that the on-field microphones could pick it up, what pitch signals he and his catcher were using: “Second sign after one. Second sign after two.” God bless this man.

Comeback season in the East Bay

We are roughly one-third of the way through the Major League Baseball season (with the exception of the teams affected by postponed games due to COVID-19 outbreak) and 28 of 30 teams are within five games back of the final wild-card spot. The expanded playoff format will keep just about every team alive in the final weeks of season. What if we told you more than 12 percent of Mookie Betts’ 147 career home runs have come in just six games? Betts tied Sammy Sosa and Johnny Mize this week for the most three-home-run games (6). You have to think another Player of the Week honor could be coming his way.

The added weight attached to each game has provided viewers with numerous moments filled with added excitement, intensity, and content — so much content that some may get lost amid all the chaos. For that reason, let’s highlight the best of the best moments from each week in baseball.

This weekend was no different. Oakland trailed 7-2 heading into the ninth on Friday until a Matt Olsen solo shot and Stephen Piscotty grand slam tied it up in the ninth. They went on to win the game with a sac fly in extra innings. On Saturday, they were down to their final strike and trailing by two runs with Mark Canha at the dish. Did somebody say bat flipping season? Eighteen postponed games and 17 days later, the Red Birds finally rejoined the group to play some baseball after experiencing a COVID-19 outbreak in their clubhouse. MLB announced a restructure of their schedule for the rest of the season, which includes 11 doubleheaders and 53 games in 44 days.

Cardinals return to the field, finally

Alex Bregman is finally starting to get his bat rolling and the return of Yordan Alvarez to the lineup helped assist the Astros in a sweep over Seattle over the weekend. The centerpiece and face of the franchise, Jose Altuve, however, has not figured things out at the dish: .184/.253/.310/.563 slash line with 21 strikeouts in just 20 games. Altuve has never struck out more than 85 times in a full 162-game season — he’s on pace for 60-plus punch outs in a 60-game condensed season.

In a season that stretches just nine weeks in length, one bad stretch can be the difference between playoffs or bust. The condensed 60-game schedule has been a blessing in disguise, all things considered.

What the Athletics have done in the late innings have simply been implausible. They have 16 wins, eight of which have been via come-from-behind fashion (most in MLB) and six after either being tied or trailing after eight innings.
In the seven games between San Diego and Los Angeles this year, three were decided by one run. This past week, Padres catcher Austin Hedges did not take fondly of a “slide” attempt at home plate by Chris Taylor. To me, rivalries have some to do with history, a little more to do with regional proximity, and everything to do with competitiveness. Right now and in the near future, the Padres may pose the biggest threat to Los Angeles within that division.

Since 2015, J.T. Realmuto leads all qualified catchers in hits, runs, extra base hits, total bases, RBI, and WAR. Perhaps his most respected attribute is his leadership. After being swept by the Orioles, Friday night’s game had a bit of a must-win aroma in the air for Philadelphia. Sure enough, Bryce Harper came through with a walk-off single that brought home the speedy Roman Quinn from second base. What may have been lost in the celebration was Realmuto, the on-deck hitter, doing his job and directing Quinn where to slide in a bang-bang play at the plate.