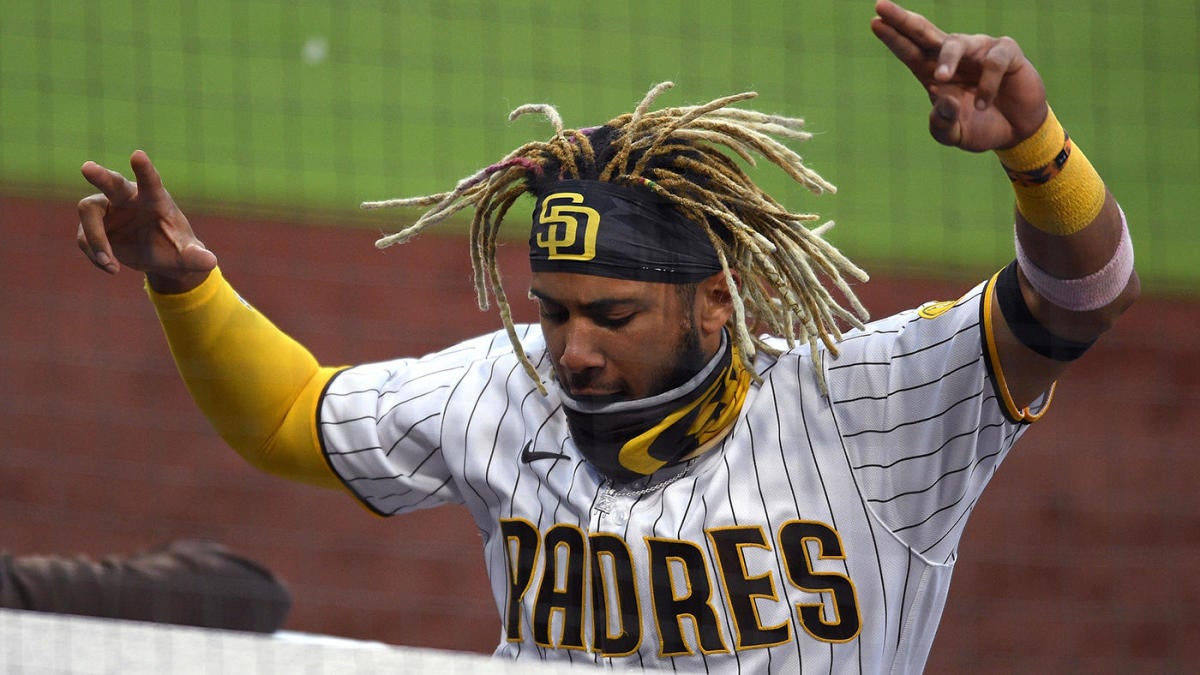 Watch Now: Highlights: Padres at Dodgers (0:59)
Tatis excelled in his rookie campaign, so much so that he was able to garner some votes for the NL Rookie of the Year Award, even after his season was cut short due to a back injury. His improvement from Year 1 to Year 2 has been a lot of fun to watch. He’s got the same power, speed and strong defense we saw in 2019 — the strikeouts are still high — but now he’s begun to sharpen up at the plate, showing a bit more patience. I’m buying Tatis’ hot start. He’s already become of the most electric talents in baseball, and I don’t think it’ll be long before he’s one of the faces of the sport.
The A’s swept the Astros in Houston, as part of their winning streak this week. Sidenote: both clubs got into a bench-clearing brawl during that series. Meanwhile, the Astros have lost their last five of six games. There’s still some time for the Astros to jump back into the division race and make this a two-team race like we discussed earlier, but based on Oakland’s recent success, now we have to discuss whether this team is the real deal for a World Series title this year. I’ll say yes, I’m buying this. Here’s why.
Entering play on Tuesday, Tatis is carrying an eight-game hitting streak dating back to Aug. 2, and it includes three multi-hit games. Over the last six games, he batted .435 with seven runs scored, a double, six home runs and nine RBI.

Buy: Tatis hot at the plate

To add to his already impressive 2020 resume, Tatis is the league’s best average exit velocity (97.6 mph), hard hit percentage (67.4) and second-best weighted on-base average (.487).
The Padres’ phenom became the ninth different player, 21 or younger, in MLB history to hit a home run in four consecutive games, and the first since Braves‘ Ronald Acuna Jr. last year. He also became the first to hit 30 home runs and record at least 20 steals in his first 100 games played. There’s only eight other MLB players in history who have hit at least 30 homers in their first 100 MLB games: Jose Abreu, Cody Bellinger, Pete Alonso, Ryan Braun, Aaron Judge, Mark McGwire, Gary Sanchez and Rudy York. Last week, we asked the question of whether we buy or sell the AL West was becoming a two-team race between the Oakland Athletics and the Houston Astros. Well, now, we’re asking the question of whether we buy or sell the A’s as a true World Series contender. So, we’re going to take a closer look at some of the biggest stories from the latest batch of games, and give each one a buy/sell decision. What are you buying and selling after this week in baseball? Feel free to share your thoughts on Twitter with me @KatherineAcqua.
We have made it to another week of the 2020 MLB season. Despite the fact that a large chunk of teams were affected by the recent Marlins and Cardinals coronavirus outbreaks, which resulted in nearly 30 postponed game, the league kept chugging along with games elsewhere last week. The Cardinals have remained sidelined since July 29, and we still don’t know when the team will be able to return to play.

Sell: Worries about the Reds after so-so start

This doesn’t look that great on paper for the Reds right now, but I’m going to sell on any worry. It’s still early, they’re not that far below .500 and can still climb back up to hold the second-place division spot or even, if things start clicking again on offense, they can try to overtake the Cubs for first. Plus, there’s going to be the expanded postseason this year. All that being said, the Reds will still need to play better but ultimately, if I’m to go off of right now, they’re still in good shape for a postseason berth.
Reds outfielder Nick Castellanos, acquired in the offseason, is still continuing his unbelievable start in Cincy (we highlighted this last week’s Buy or Sell), but the rest of the lineup hasn’t impressed as much offensively. Shogo Akiyama is in a slump, Mike Moustakas has only played seven games this season due to injuries, Freddy Galvis was 2-for-12 last week and Jesse Winker is one of the few Reds batting above .240. As far as the rotation goes, Trevor Bauer and Sonny Gray have been solid and Luis Castillo has been decent but the Reds have only scored a total of six runs in the three games Castillo has started.
The Cincinnati Reds loaded up this offseason with the hope of a return to contention, but after 16 games, the club is just hanging on to its second-place spot behind the Chicago Cubs in the NL Central. Entering play on Tuesday, the Reds are 7-9 on the season and own a .500 winning percentage for their last 10 games. In his second season in the bigs, San Diego Padres shortstop Fernando Tatis Jr. has been off to a hot start. Entering Tuesday, the 21-year-old leads the league in total bases (52) and is tied with Yankees‘ Aaron Judge for most home runs, with eight. Five of those homers came in the last week for Tatis and two of them happened in the same game on Saturday. On the season, he’s batting .328/.408/.776 with a 1.184 OPS (229 OPS+).
Now, let’s get to it:

Right-hander Frankie Montas has been solid on the mound for the A’s. In his last two starts, he took home the win and recorded 14 strikeouts, four walks, six hits and a 0.64 ERA across 14 innings. Fellow rotation mates Chris Bassitt (quality starts), Jesus Luzardo (earned his first MLB win), Mike Fiers (reliable so far) have also contributed to the club’s early-season success. Entering play on Tuesday, the A’s have the third-lowest ERA (3.10) in the league, trailing only the Cleveland Indians and Los Angeles Dodgers. The bullpen is where the Reds need to get some help. Like everything in this abbreviated 2020 season, any weakness needs to be addressed almost immediately. Reds reliever Michael Lorenzen hasn’t looked like his usual self this season and sports a 16.88 ERA (2.92 ERA in 2019).
After a nine-game winning streak (the longest winning streak in baseball this season) saw its end to the Los Angeles Angels on Monday, the A’s have extended their first-place AL West led over the Astros to four and a half games. According to Sportsline, the A’s 2020 World Series odds jumped from a 3.6 percent chance to win it all to 7.9 percent. Last week, the Astros were 60 percent to win the division and the A’s at 33 percent. Now, after Oakland’s impressive week, the A’s are 80 percent to win the division. Our own Mike Axisa broke down why the Athletics have made it clear they are a legitimate World Series contenders with their recent win streak.
As of late, Raisel Iglesias, Amir Garrett and Nate Jones have been solid but altogether, the Reds relievers ERA is 7.77, the second-worst in baseball. No other reliever has been lights-out this season, and with the shaky performances thus far this season, the bullpen is in need of some reliable arms.  The A’s have been led by a steady rotation and bullpen, two things that we are seeing teams struggle with all across the league right now. A big factor is obviously the shortened season itself and the quick second spring training, not allowing pitchers the normal time usually given to ramp up their workload. We’ve seen more pitcher injuries than normal so far this season. But, Oakland pitching has managed to stay healthy and reliable.