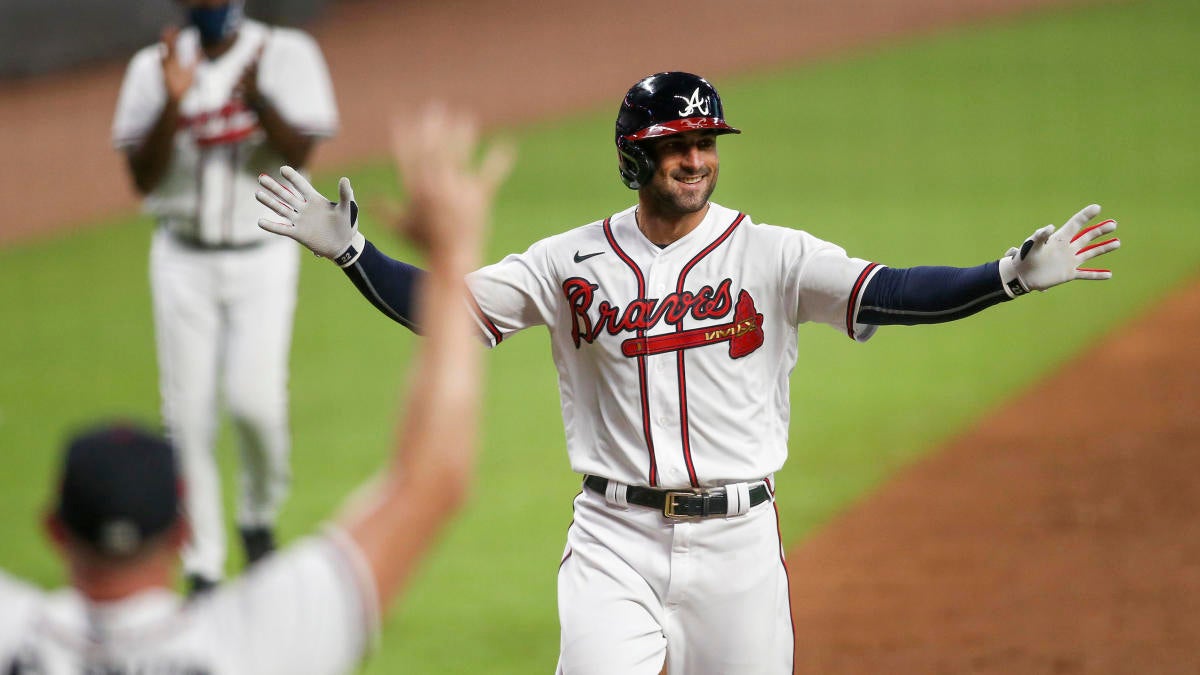 Watch Now: Tiki and Tierney: Those who break MLB’s COVID-19 protocols will be suspended for the season (2:15)
After veteran Atlanta Braves outfielder Nick Markakis reversed his opt out decision on the 2020 season, he rejoined the Braves lineup for Thursday’s game against the Blue Jays. In his first regular-season start of the year, Markakis hit a walk-off home run. It was a one-out blast hit on the first pitch of his ninth-inning at-bat against right-hander Wilmer Font.
“It was a little weird but that’s the situation we’re in,” Markakis said after the game. “We’re still out here playing the game. We’re still playing for everybody. We’re still playing for the fans.” In any given MLB season, typical walk-off celebrations would have ensued following Markakis’ home run trot. But, we are far from normal in this 2020 season amid the ongoing coronavirus pandemic, so Braves teammates found a way to celebrate at home plate while adhering to the social distancing guidelines. That included players standing far apart, circling around Markakis and waving their hands in the air. As weird as it looked, it’s the new normal, I guess. For your viewing pleasure: The Braves, who have won the last two NL East titles, shook off a slow start and are 7-3 in their last ten games. Atlanta (9-5) will begin a nine-game road trip on Friday, with a four-game series against the Phillies.
In his first game back, Markakis started in right field and finished 1-for-4 with a run, RBI and one strikeout. The return of Markakis will give the Braves another left-handed bat in the outfield and he’ll likely split time between the outfield and DH spots. With the universal DH this year, the Braves now have a few options in Marcell Ozuna, Matt Adams, Austin Riley, Adam Duvall and Markakis.
Markakis, 36, informed the Braves on July 6 that he intended to opt out of the 2020 season. But, he reversed course just over three weeks later and reported to the team’s training site to resume workouts. He was officially reinstated from the restricted list on Wednesday where he grounded out to first base as a pinch-hitter in the eighth inning of the 2-1 loss to the Blue Jays. He was later added to the club’s lineup for Thursday’s game at Truist Park.