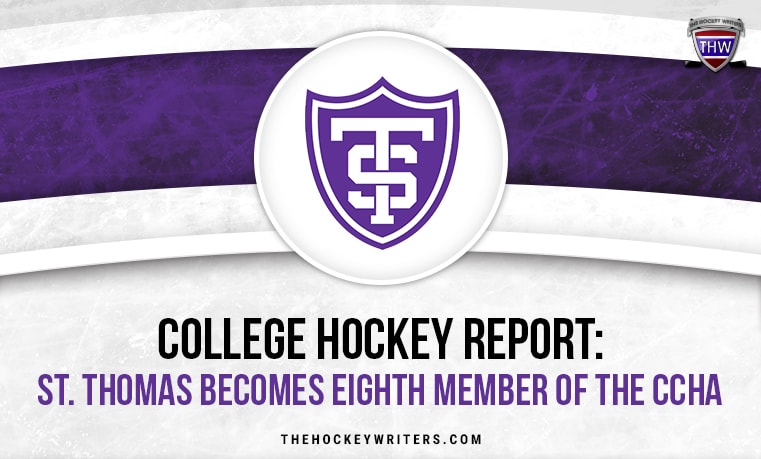 Despite the strange world we live in today, and the uncertainty of the future of sports, the landscape of college hockey has grown. From Long Island University’s announcement of the creation of a men’s hockey program to the outpouring support of fans and alumni to save the Alabama-Huntsville team, Division I Hockey in the NCAA is in a good place during these odd times.

Related: The WHA – A Look Back at the Upstart Hockey League

The offseason upswing increased after the announcement earlier this month that the University of St. Thomas was going to make the jump from DIII to DI, meaning both the men’s and women’s hockey teams will join the highest level of collegiate hockey. On Wednesday morning, the revamped Central Collegiate Hockey Association (CCHA) made a big move, announcing that the Tommies’ men’s program will become the eighth program to join the new conference.

In February, the college hockey world was shocked when seven teams from the Western Collegiate Hockey Association (WCHA) announced they were leaving the conference following the 2020-21 season to create a new CCHA, which will begin play in the fall of 2021.

Four of the seven programs of the new league were part of the old regime. Ferris State, Lake Superior State, Northern Michigan and Bowling Green all played in the old CCHA, with Michigan Tech, Bemidji State and Minnesota State joining the group.

When the announcement was made that the Tommies’ athletic program was moving to DI, the college hockey world rejoiced as St. Thomas will become the 62nd program to join the DI level.

Even though they will be the new kids on the block in the top-tier NCAA, Tommies hockey has been around for almost a century. The program came to fruition in 1920, and since then they have won 1,164 games, the most of any DIII program. The Tommies have won 34 conference championships, 12 as a member of the Minnesota Intercollegiate Athletic Conference (MIAC). St. Thomas clinched a spot in the DIII playoffs 17 times, twice as the National Runner-Up (2000 and 2005).

Support for the move is coming from the athletic department as well as the university.

“St. Thomas not only has an opportunity to extend our visibility across the region,” school president Dr. Julie Sullivan told the media on Wednesday. “But also to be a part of the CCHA’s re-emergence in college hockey.” Dr. Sullivan also stated that under new-CCHA Commissioner, Don Lucia’s guidance, there will be a lot to look forward to for the revamped conference.

“St. Thomas fits nicely within the CCHA footprint,” Lucia mentioned to the media. “And impressed us all with the level of commitment they have for their hockey program.”

The commissioner knows what it’s like to have a top DI team in the State of Hockey. Lucia coached the University of Minnesota to two national championships during his 19 seasons behind the Golden Gopher’s bench.

The League is Set

The move to bring St. Thomas on board will prove immediate dividends for the new conference, as an eighth member will provide balance for the league’s eventual schedule and playoff format. The addition of the Tommies also provides strength to the conference and the ability to create more rivalries, as there will be three teams in the “Land of 10,000 Lakes”.

It will be interesting to see how St. Thomas performs in their first season in DI, as they have over a year to recruit and prepare before they take on some of the best teams college hockey has to offer.