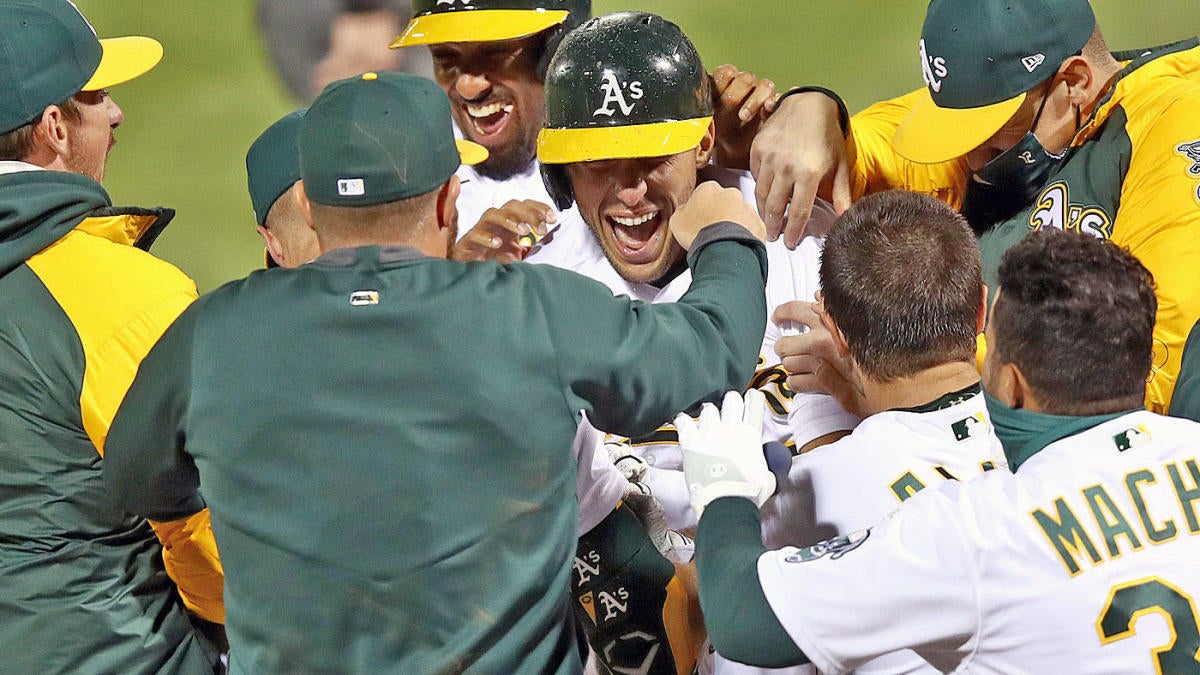 Watch Now: MLB Early Slate Recap: Shane Bieber Sets Indians Opening Day Record With 14 K’s (2:10)
Needless to say, the extra innings rule is ripe for chaos and second guessing. To bunt or not to bunt? We’ll argue it all season. Fortunately the extra innings rule will be used during the 2020 regular season only. Extra innings in the postseason will be business as usual and this rule goes away in 2021.
Funny enough, the new rule seemed to catch Ohtani by surprise. He was walking around the dugout in his sweatshirt following the end of the ninth inning and had to be reminded to go out to second base to start the 10th. Check it out:
The Angels almost certainly would have intentionally walked Chapman to set up the double play had Laureano bunted Semien to third, so the net gain is one percentage point. That’s all. And that’s only if the bunt is successful, which is not a guarantee. I get letting Laureano (or any hitter) swing away there. The runner’s already in scoring position and you have three shots to drive him in. The extra innings scenario was made possible by Los Angeles Angels catcher Jason Castro, who slugged a game-tying solo home run against Oakland Athletics closer Liam Hendriks in the top of the ninth. Shohei Ohtani struck out with the bases loaded to end the ninth inning, so, by rule, he was the runner at second base to begin the 10th. Friday night in Oakland (OAK 7, LAA 3), the new extra innings rule was used for the first time in baseball history. MLB implemented the rule, which puts a runner at second base to start each extra half-inning, to help speed the game along this season. The league doesn’t want games going deep into extra innings during the COVID-19 pandemic.
Anyway, the bottom of the 10th got weird. Laureano took a Hansel Robles fastball to the shoulder, then, after Chapman struck out, Robles uncorked a wild pitch and moved the winning run to third base with one out. The Angels opted to employ a five-man infield in an effort to cut the runner down at home. After Robles walked Khris Davis to load the bases, Olson clocked a first-pitch walk-off grand slam against lefty Hoby Milner.

The Angels elected not to bunt Ohtani to third base to begin the 10th. Michael Hermosillo, who replaced Justin Upton for defense earlier in the game, instead started the inning with a ground ball to first base, which Matt Olson threw to third to get the lead runner. It was a tremendous play by Olson and third baseman Matt Chapman. Los Angeles eventually loaded the bases on a Tommy La Stella single and a Castro walk, though A’s reliever Burch Smith was able to escape unscathed. He got Andrelton Simmons to ground out to second with the bases loaded to end the inning. Should the Angels have had Hermosillo bunt the runner to third? Easy to say yes knowing what we know now, but I think you have to play to score as many runs as possible as the road team. You can’t assume one run will be enough. For official scoring purposes the automatic runner at second base is said to have reached on an error, though no fielder is charged with an error. Also, the automatic runner goes into the books as an unearned run when he comes around to score, so it does not hurt the pitcher’s ERA. The pitcher is responsible for any runners he allows, however.
Once Smith escaped the top of the tenth, the Athletics were given a runner at second base to begin the bottom of the tenth. That runner was Marcus Semien, who popped up behind the plate to end the bottom of the ninth. Even though the A’s only needed one run to win the game, they elected to let Ramon Laureano swing away. Here are the run expectancy numbers: Semien, the automatic runner to begin the inning, is credited with a run scored. Robles was charged with three runs total but only two earned runs. Semien’s run was unearned but Laureano’s and Davis’ are earned because Robles allowed them to reach base. Milner is charged with an earned run for Olson. Got all that?