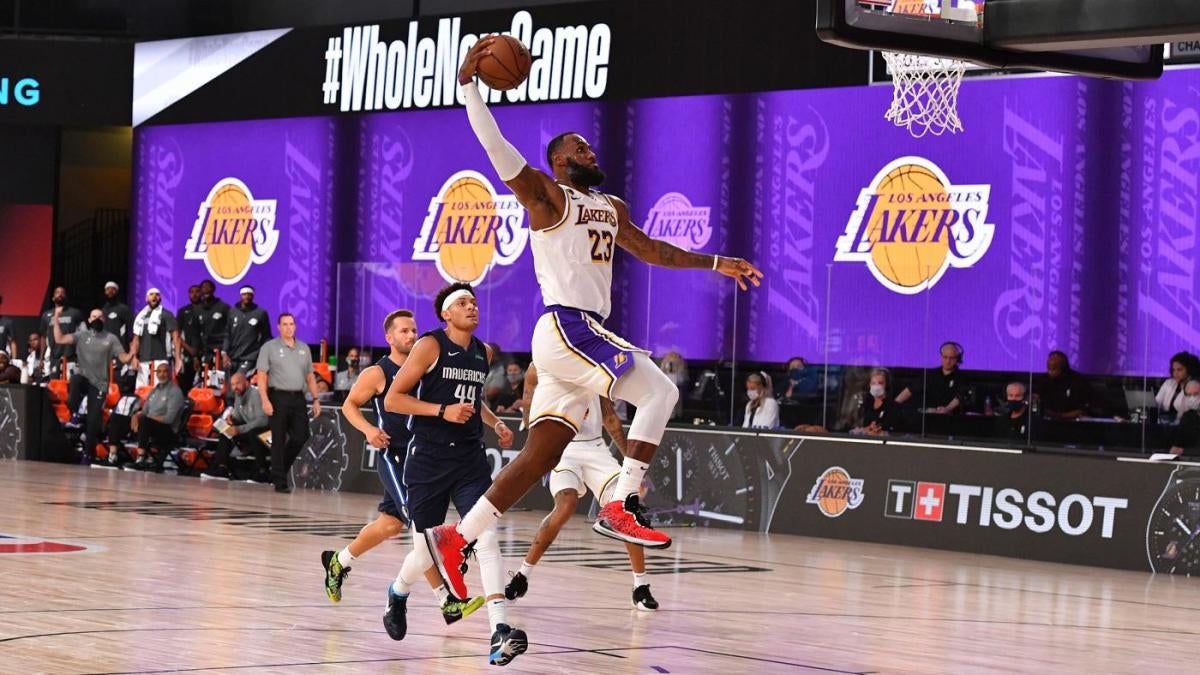 Watch Now: Time to Schein: Giannis Antetokounmpo is the MVP over LeBron James (1:51)

The NBA officially returned with scrimmage games on Wednesday, and while Bol Bol was an absolute delight, some much bigger names took the stage on Thursday. LeBron James, Giannis Antetokounmpo, Luka Doncic and Damian Lillard were among the stars to make their bubble debuts, and it was nice to see some familiar faces on our screens.

Things continued to be a bit weird and awkward as the players and production crews get used to games with no fans, but overall it was another good, full day of NBA hoops. Let’s take a look at the scores, and some of the things that stood out from Thursday’s games.

Lakers fans, and NBA fans in general, were excited to see LeBron James in game action once again, but he had a slightly different look. He showed up to the Lakers’ first scrimmage game against the Mavericks on Thursday with prominent gray patches on his beard, something we haven’t seen all season.

This either means that LeBron is embracing his 35 years on this earth, or he forgot to pack his Just For Men beard dye before he left for the bubble. Either way, it’s clear the despite the new look, we’re still going to see the same LeBron James in Orlando.

James only played the first half of the Lakers’ bubble opener, putting up 12 points, five assists and three rebounds in 15 minutes. He and Anthony Davis combined for 24 points on 9-for-13 shooting in 30 minutes. The Lakers look ready to embark on their postseason trek.

Yeah, this whole thing is gonna take some getting used to … but kudos to the Lakers for making the effort.

Don’t mess with the Boban

Not only is Boban Marjanovic a co-star in John Wick 3 — he’s also a pretty good basketball player. The 7-foot-4 fan favorite dominated in the Mavericks’ win over the Lakers on Thursday, finishing with 17 points, 13 rebounds and two blocks in 23 minutes, including a no-hesitation, nothing-but-net 3-pointer.

Lest you think Marjanovic is just putting up fluky numbers in a meaningless scrimmage game, don’t forget that he went off for 31 points and 17 rebounds in the Mavericks’ final game before the hiatus back in March, a 113-97 win over the Nuggets.

Seth Curry with the shot

You might not be able to see Warriors star Stephen Curry in the bubble because his team was so bad they didn’t get invited, but his brother Seth was just as entertaining on Thursday. The Mavericks guard had a perfect night, hitting all nine of his shots, including 6-for-6 from 3-point range and 1-for-1 from the free throw line. He finished with a game-high 23 points in 15 minutes.

The Bucks looked great in their win over the Spurs, scoring 113 points in 40 minutes, but Giannis Antetokounmpo seemed to have a little trouble remembering that NBA basketball is played with referees. The Greek Freak picked up five fouls in just 12 first-half minutes, an impressive feat for any level. He managed to avoid picking up another foul in the second half and finished with 22 points, four assists, three rebounds and three steals in 21 minutes, including a no-look dime to Robin Lopez for a third-quarter 3-pointer.

The bigs are back

The Blazers looked re-energized and excited for their first scrimmage game, probably due to the long-anticipated return of big men Jusuf Nurkic and Zach Collins. Nurkic hasn’t played since suffering a brutal leg injury in March of 2019, and Collins has missed all but three games this season with a shoulder injury. Nurkic, who finished with 14 points and eight rebounds in 20 minutes, immediately showed how his size and post-up skills can lead to easy baskets for Portland. Sure, the Pacers didn’t have their two best big men, Domantas Sabonis and Myles Turner, but it was still impressive for a guy who hasn’t played NBA basketball in almost a year and a half.

He also showcased his playmaking ability as a facilitator, setting up teammates for easy buckets.

Collins put up six points, four rebounds and a block in 19 minutes, looking athletic and agile in the process.

Lineups with both Collins and Nurkic performed well last season, as did lineups with Collins and Hassan Whiteside in a small sample size to start the 2019-20 season. The absence of Trevor Ariza hurts, but Damian Lillard and CJ McCollum will clearly have some additional help with Nurkic and Collins, which should make Portland’s pursuit of the No. 8 seed thoroughly entertaining.

While players continue to adjust to the lack of fans, the Trail Blazers decided to have some fun as they took the court before their loss to the Pacers, pointing to imaginary fans in the stands and hyping up the non-existent crowd.

Oladipo’s a go … for now

After announcing in early July that he wouldn’t play in the NBA restart, Pacers guard Victor Oladipo has since had a change of heart, and he played 19 minutes in the team’s win over the Blazers on Thursday. He looked understandably rusty, but got hot for a stretch in the third quarter to finish with eight points and six rebounds on 3-of-10 shooting.

Oladipo hasn’t said publicly whether he’ll be on the court when seeding games start, but the fact that he’s playing in scrimmages is a good sign for Pacers fans. If healthy, Oladipo clearly elevates the ceiling for an Indiana squad that has played well without him all season.

Hey, it happens to all of us. CJ McCollum looked to put a little extra sauce on his dunk after a brilliant pass from Jusuf Nurkic … unfortunately McCollum’s legs didn’t get the memo.

Give McCollum credit for laughing it off, but this is one of a basketball player’s biggest nightmares. Can you use the bubble snitch hotline to report the rim for cruel and unusual punishment?