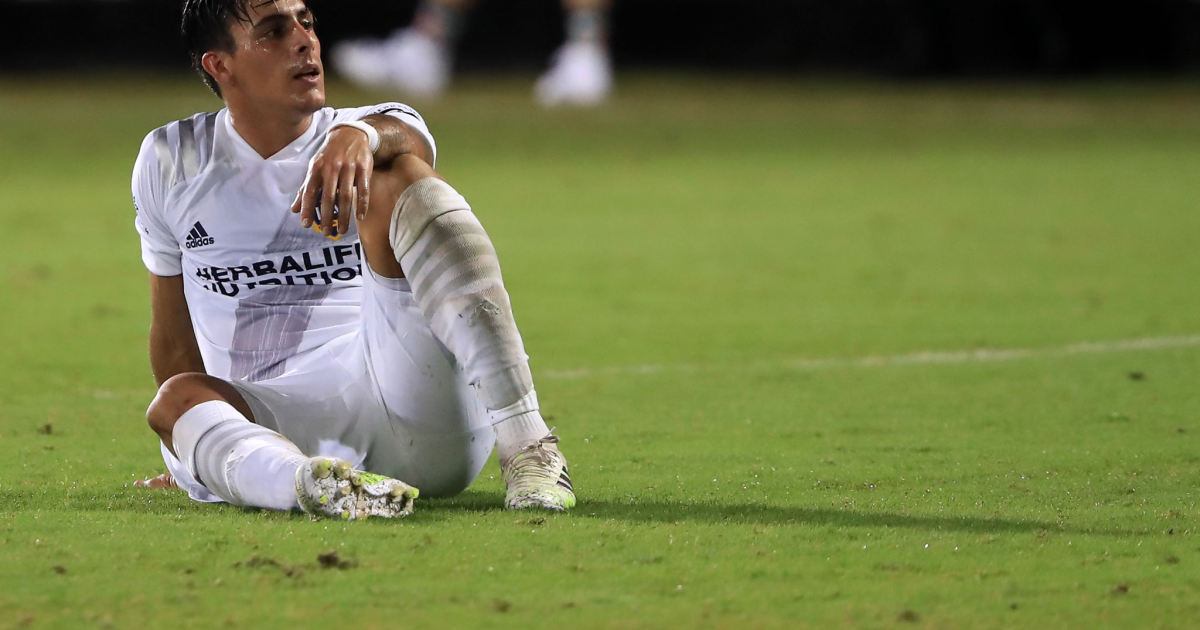 The Galaxy arrived in Florida 18 days ago with high hopes and great expectations for the MLS Is Back tournament.

But they’ll go home with nothing more than a tie to show for their troubles after being eliminated from the competition Thursday in a 1-1 draw with the Houston Dynamo on a rain-slicked field at ESPN’s Wide World of Sports.

LAFC also played to tie in Thursday’s second game, matching the Portland Timbers 2-2. But it will be sticking around after placing second in the group, finishing the three-game group stage unbeaten and grabbing five of the nine regular-season points available in the tournament’s first round.

LAFC’s goals, both in the first half, came from Bradley Wright-Phillips and Mark-Anthony Kaye. Portland equaled that with a Jaroslaw Niezgoda goal in the seventh minute and one from Jeremy Ebobisse in the 81st minute.

LAFC (1-0-2 in the tournament, 2-0-3 on the season) will play in the round of 16 against Seattle, the defending MLS champion and the team that knocked it out of the playoffs last fall. Portland, the group winner, will play Cincinnati.

The Galaxy, meanwhile, will exit the MLS quarantine bubble and limp home winless at 0-2-1 in the tournament and 0-3-2 on the season. With just two points through five games, it’s the worst start in franchise history.

LAFC fell behind in the opening 10 minutes for the third time in as many games and once again it was because of a defensive mistake. This time it was Latif Blessing getting beaten badly up the center of the field by Niezgoda, who ran on to a long ball from Sebastian Blanco at the top of box and, surrounded by nothing but space, calmly slotted it home.

Blessing made up for that mistake in the 36th minute, sending a long diagonal ball from the edge of the center circle ahead for Wright-Phillips, who tied the score with his third goal in as many games. Four minutes later Kaye untied it, heading in a Brian Rodriguez corner at the far post to put LAFC in front at the half for the first time in the tournament.

But although LAFC outshot Portland 19-7 and had a nearly 2-1 advantage in time of possession, that was all it would get, allowing Ebobisse to erase all that hard work with this game-tying goal nine minutes from the end of regulation. It was the only second-half goal LAFC has allowed in Florida.

“At the end of the night we’re disappointed,” LAFC coach Bob Bradley said. “You hate to give up a late goal. We showed a little bit of fatigue. Our ability to finish the game, that’s where we let ourselves down.”

The Galaxy came into their group-play finale needing to win and make up most of a minus-five goal differential to stay alive. They did neither. But they did play their best game of the tournament and one of their best in the COVID-19-interrupted season, outshooting, outpassing and outpossessing Houston.

The Galaxy also had 10 corner kicks to Houston’s one, the final one setting up Cristian Pavón’s game-tying penalty-kick goal in second-half stoppage time.

Houston’s only score came in the 17th minute on a bending free kick from Darwin Quintero that froze Galaxy keeper David Bingham.

“We leave with a lot of disappointment because it didn’t go as expected,” midfielder Joe Corona said. “We have so much to work on. Just take it as a learning experience.”

One thing the Galaxy learned is that teenage midfielder Efrain Alvarez deserves more playing time. Alvarez played just six minutes in the first two games of the tournament but came on for Corona in the 77th minute against Houston and immediately brought energy.

“Today he found the spaces. He showed his ability,” coach Guillermo Barros Schelotto said. “I am happy with his productivity, but he has to be more consistent.”