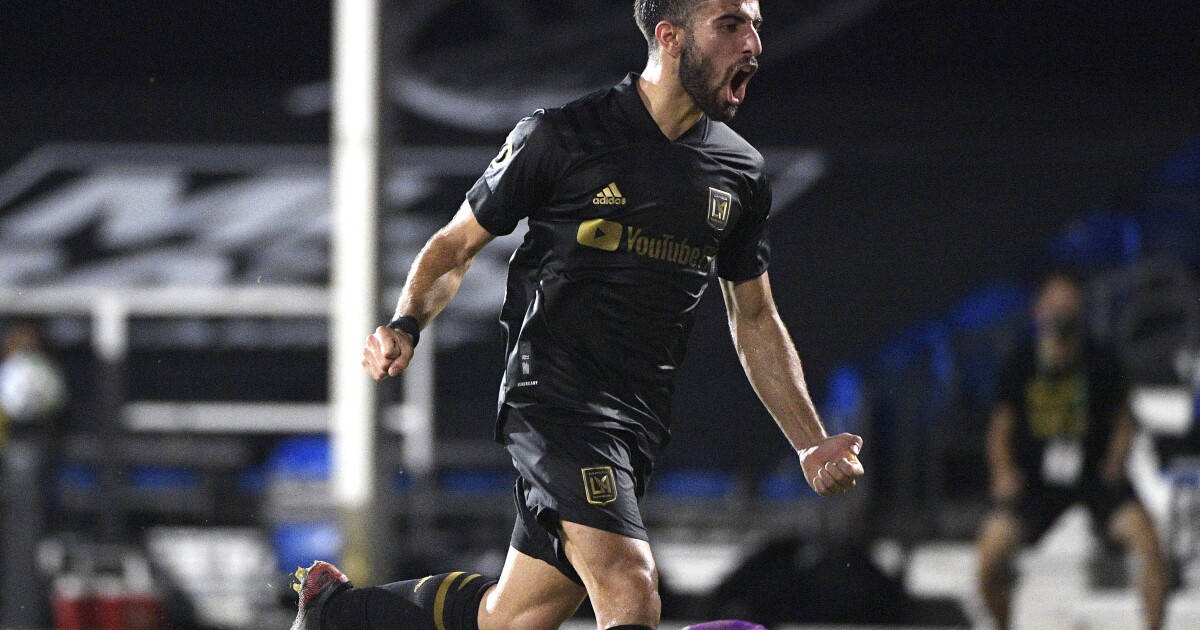 Despite its short history, the LAFC-Galaxy rivalry already has grown into the most passionate among pro teams in Southern California, fueled by two noisy, devoted fan bases in stadiums just 12 miles apart.

But on Saturday night, the L.A. County neighbors met again without fans — and without Galaxy striker Javier “Chicharito” Hernández, who missed the game with a calf strain — at a youth soccer complex 2,500 miles from home. And the silence was deafening.

So LAFC’s Diego Rossi made some noise of his own, scoring four times in a 6-2 rout that moved LAFC a step closer to the knockout stages of the MLS Is Back tournament while the Galaxy, with their second loss in as many tries in Orlando, moved a step closer to elimination.

Rossi has shown he’s ready for his new role, even if it’s only temporary. With Carlos Vela, the reigning league MVP, sitting out the tournament, Rossi has become the focus of LAFC’s attack. And he has embraced the challenge with five goals in two games in Orlando.

“I’m happy with my game. But I’m just as happy about the result,” he said. “We’d like to continue like this.”

In Saturday’s other Group F game, the unbeaten Portland Timbers rode goals from Diego Valeri and Jeremy Ebobisse to a 2-1 win over the Houston Dynamo, clinching a berth in the second round.

The top two teams from each of six groups, plus the four best third-place teams, advance to the next stage of MLS’ return-to-play tournament. LAFC, second in the group, will finish the first round Thursday against Portland needing a point to advance. The Galaxy — 0-2 in Orlando and 0-3-1 on the season, the worst start in franchise history — need a win in their group-play final with Houston, plus a lot of help, to avoid elimination.

An early exit might not be the worst of the Galaxy’s problem, though. They came to Orlando down one designated player, having left captain Jonathan dos Santos in Southern California following surgery to repair a sports hernia. Now they’re missing another in Hernández, who is expected to be out two to four weeks.

And if that’s not enough, the six goals Saturday were the most they’ve allowed in a game in more than three years.

The Galaxy started fast, matching their season total for goals with two in the first 31 minutes on an own goal and a penalty kick.

The first was a gift, with LAFC’s Latif Blessing sticking his right foot in the way of a Sebastian Lletget pass on the edge of the six-yard box and deflecting it past keeper Pablo Sisniega. The second came when Cristian Pavón went one for two on penalty kicks, getting stopped by Sisniega on his first try but making good on his second attempt after Sisniega was ruled to have left his line early.

Rossi matched that, scoring on a penalty kick of his own in the 13th minute and then evening the score in first-half stoppage time, left-footing in the rebound of a shot by Bradley Wright-Phillips.

Wright-Phillips put LAFC in front to stay early in the second half, toying with defender Giancarlo Gonzalez before rolling the ball in from the top of the box for his second goal in as many games. Rossi completed his hat trick with an insurance goal in the 76th minute before closing the scoring in stoppage time, tying Toronto’s Ayo Akinola for the tournament scoring lead with five goals.

Not for the Galaxy.

LAFC and Adidas are dropping a soccer-inspired sneaker collab on Aug. 22