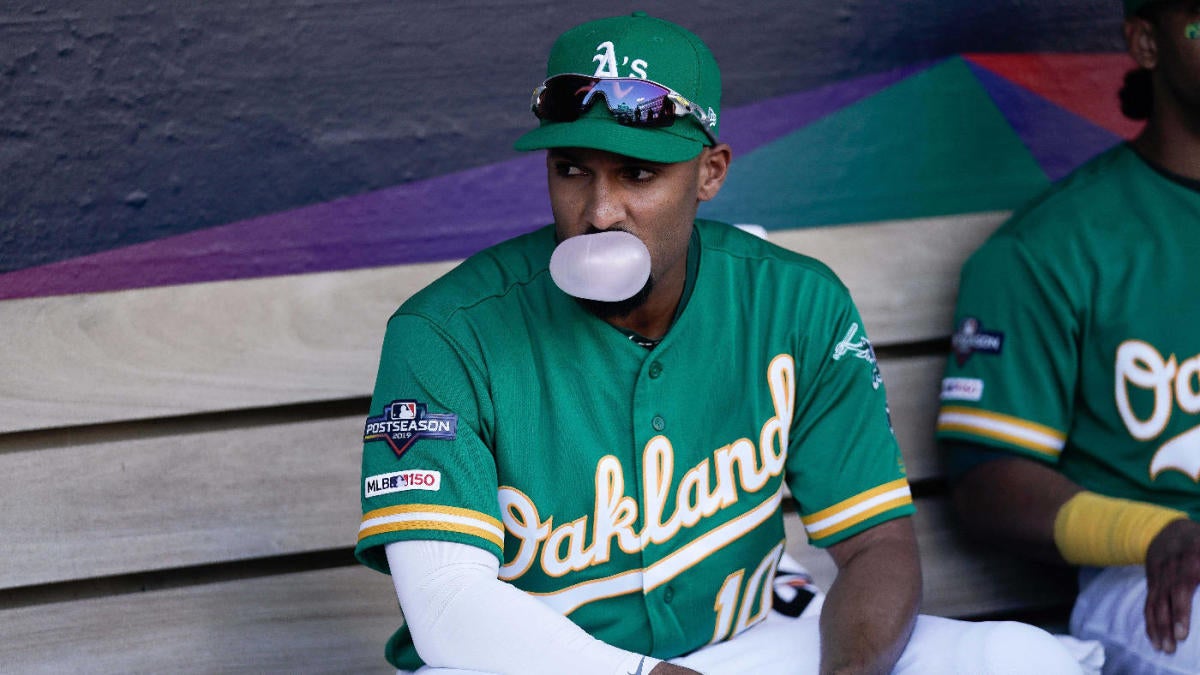 Watch Now: Middle Of A’s Lineup Looks For Big 2020 (1:10)
Oakland had one of the most potent offenses in baseball last season, finishing fifth in FanGraphs’ park-adjusted wRC+ metric, behind the Astros, Yankees, Twins, and Dodgers. That’s good company, and company the A’s are likely to maintain in 2020.
We’ll see what happens, but the A’s have a roster that deserves a longer stay on the national stage come October.
Which brings us to a pertinent question: can the A’s surpass the Astros (and everyone else) to win the division and avoid the Wild Card Game?
Bench: C Austin Allen; INF Franklin Barreto; UTL Chad Pinder; OF Robbie Grossman
Major League Baseball intends to kick off its regular season on July 23. The season will be an abbreviated one, lasting just 60 games and featuring a slew of modifications, including a universal DH and altered extra-inning rules. Even the rosters will be different, with teams carrying 30 players to begin the year before gradually getting down to 26.

From a certain perspective, the A’s have had a rough couple of years. Although they’ve averaged 97 wins over the last two seasons, they’ve lost in the American League Wild Card Game in both years. As a result, the A’s have not advanced so far as the Divisional Series in any of their last three trips to October, and they haven’t played in the League Championship Series stage since 2006.

Beyond Fiers, things get dicey. Because of injury (and, more recently, suspension) Montas has never thrown more than 140 innings in a season, even when the majors and minors are combined; Manaea has been up to 160, but shoulder surgery limited him to 66 frames last season, and it would make sense if the A’s wanted to take a conservative approach to his workload for his long-term wellbeing; ditto for the young, talented tandem of Luzardo and Puk, who have dealt with their own injury issues and who threw a total of 91 innings in 2019. Luzardo also tested positive for the coronavirus earlier this month.
Because you can’t have a baseball season without team previews, we’ll be touching on every team between now and Opening Day.

In that sense, perhaps the A’s will benefit more than other teams from the reduced year. This way, their rotation might have a better chance at staying healthy (and avoiding inning caps), and this way, they can benefit from some of that sweet, sweet variance that tends to balance out over 162.

Can the starters stay healthy?

If those five can stay hearty and hale all year, the A’s could have one of the better rotations in baseball. Shy of that, the A’s do have a fine insurance policy in Bassitt, who has durability concerns of his own but has shown he’s a capable arm when healthy.
Provided the pitching holds up — and, for the most part, that’s a health issue not a talent one — this A’s club is going to be highly competitive, again. Fiers is the closest thing manager Bob Melvin has to a reliable workhorse. He’s started 30 or more games in four of the past five seasons, and he started 28 in the year he fell short of 30. Nobody will remember his past year for on-the-field reasons, but he set a career-high in innings last year by tossing 184. It’s safe to write he won’t threaten that mark this year.
At the risk of sounding like a broken record, almost everyone here was with the organization last season, too. (McFarland is the outlier.) The A’s could also use some of the aforementioned pitchers, as well as the likes of Burch Smith, Jaime Schultz, and Lucas Luetge in the ‘pen.
2020 Sportsline projection: 34-26
World Series odds (via William Hill Sportsbook): 25/1
2019 record: 97-65

Today, that means highlighting the Oakland Athletics.
In our estimation, this is the biggest question facing the A’s and their chances of making a run.
By now, everyone should know about the mainstays. Chapman is one of the best players in baseball; Semien is going to be a highly sought after free agent this winter; Olson is a cinch for 30 homers (well, in a 162-game season); Laureano is essentially the late-night version of Kevin Kiermaier; and so on. It’s a good lineup, and it’s a deeper on than it gets credit for being.  To wit, consider the A’s bench on most days. Pinder has been a league-average hitter for his career, and can stand in around the diamond. Allen has above-average power potential and has hit at every level; Grossman is a walk machine, albeit one whose lack of other offensive skills might limit his shelf life; and Barreto is a former top prospect who still has boosters around the league. Even the depth options, like Seth Brown and Vimael Machin, have capable sticks.

It didn’t seem too likely back in the spring. For some perspective, consider that Baseball Prospectus’ projection system had the A’s 12 games behind the Astros over a 162-game schedule. FanGraphs’ had the A’s slightly closer, at 10 games. Even now, Sportsline’s projections for 60 games have the A’s a handful of games behind Houston.
Likewise, all five members of Oakland’s rotation were with the team last season. Should anyone suffer an injury — and there’s a real risk there, as we’ll address later — then either Chris Bassitt, Daniel Gossett, or Paul Blackburn would presumably get the first look. Daulton Jefferies and James Kaprielian could also factor into the equation. The A’s under Billy Beane haven’t always had much year-to-year consistency, but eight of their nine projected starters were with the organization last season. (Kemp, a trade acquisition from the Cubs, is the exception.) Some other names who could find at-bats in Oakland before the year is out include Seth Brown, Vimael Machin, Sheldon Neuse, Dustin Fowler, and Skye Bolt.
Indeed, it might behoove the A’s to implement a six-pitcher rotation, or find a weekly spot-start assignment, for two purposes: 1) to keep everyone healthy and 2) to find innings for Bassitt (and/or, to a lesser extent, for Gossett). The risk is that the A’s aren’t as equipped to handle multiple rotation injuries. Most teams aren’t, but few have this kind of exposure potential.