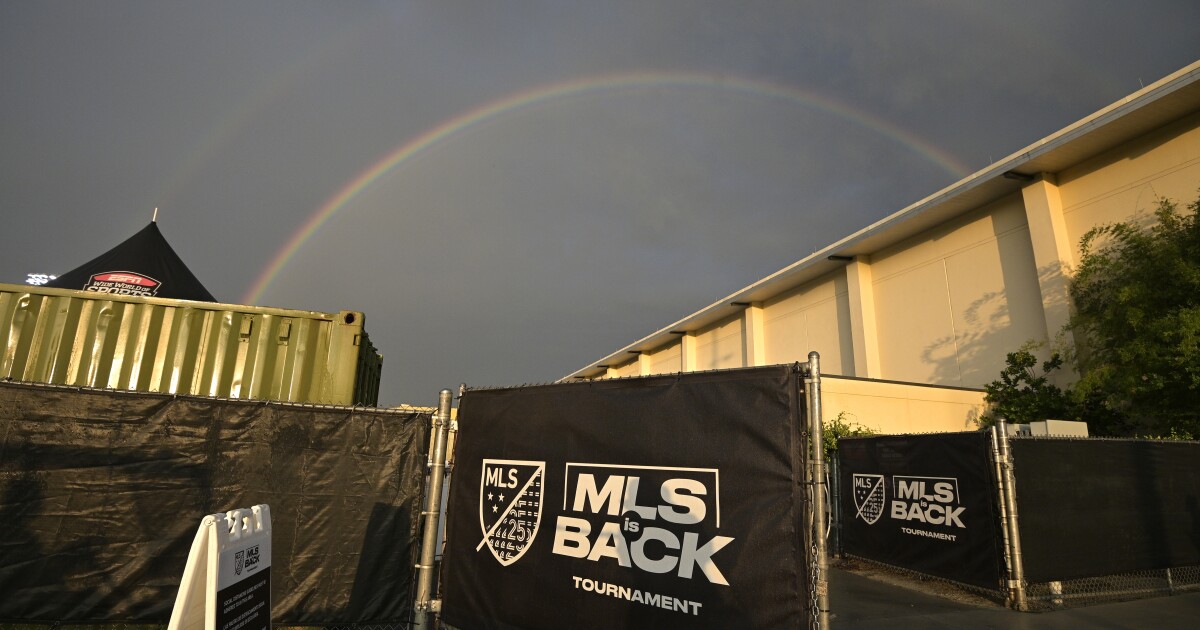 Major League Soccer’s return to play continues to be troubled by positive tests amid the coronavirus outbreak, which forced another match to be postponed Sunday. It was the third postponement or cancellation in five days and it came just two hours before Florida announced that 15,299 people had tested positive overnight, a record, raising new questions about the wisdom on continuing with the MLS Is Back tournament.

If Florida were a country, Reuters reported, it would rank fourth in the world for the most new cases a day behind the United States, Brazil and India.

Florida reports a record 15,300 COVID-19 cases overnight Sunday. If Florida were a country, it would rank fourth in the world for the most new cases a day behind the U.S., Brazil and India. @MLS postponed another game because of 2 positive COVID cases. But Disney World is open

The league, however, remained undeterred.

“We believe the tournament can be carried out safely. In case it isn’t, we’d make a decision,” Mark Abbott, the MLS deputy commissioner said.

The latest problem came Sunday morning when a match between D.C. United and Toronto FC was postponed after players on both sides tested positive. D.C. United was already at the field at ESPN’s Wide World of Sports when MLS made the decision not to play while Toronto remained at the MLS hotel.

D.C. United stayed behind after the postponement and held a short training session.

“Major League Soccer announced that today’s D.C. United vs. Toronto FC match has been postponed and will be rescheduled,” the league said in a statement Sunday. “MLS will announce details later today for the rescheduled match.

“Under the league’s health and safety protocols, clubs are tested the day before each match. The results of yesterday’s tests for D.C. United and Toronto FC produced an initial unconfirmed positive COVID-19 case for one player and an inconclusive test for another player.”

MLS announced later Sunday that both teams participated in another round of testing and all players from the two clubs tested negative, clearing the way for the game to be played Monday at 6 a.m. PT. The player who received an initial positive test and the player whose test was inconclusive will undergo additional testing and will not play in tomorrow’s match.

Although six games in the MLS Is Back have been completed, Sunday morning’s match was the third of nine scheduled games to be postponed or canceled because of failed tests since the tournament kicked off Wednesday. The match was originally scheduled for Friday but had to be pushed back when Toronto FC’s arrival was delayed by additional testing in Canada.

Two teams — FC Dallas and Nashville SC — were withdrawn from the tournament last week after multiple players on both teams tested positive. At least 22 players from four teams have had confirmed positive tests since entering the MLS quarantine at Disney’s Swan and Dolphin resort in Orlando, suggesting the league’s protective bubble has been compromised.

Sporting Kansas City, which on Friday confirmed one of its players tested positive, was scheduled to play Sunday night.

The 51-game made-for-TV tournament marks the league’s return to play after a four-month suspension caused by the coronavirus outbreak. MLS is the first men’s professional sports league in the U.S. to resume play. NBA players began arriving in Orlando, Fla., last week in advance of that league’s resumption of play at Wide World of Sports later this month. Major League Baseball is scheduled to return July 23.

In addition to the virus infection, the MLS tournament is now being disrupted by the weather. Saturday night’s doubleheader was delayed by torrential rains and lightning and the second game, between FC Cincinnati and the Columbus Crew, didn’t finish until after 1 a.m. local time.

The oppressive humidity is also impacting how the games are being played.

“Whenever you come in the summer and play games in heat and humidity, it’s a factor. Anybody who says that’s not the case, they’re not really being honest,” said LAFC coach Bob Bradley, whose team is scheduled to begin play Monday against the Houston Dynamo. “You have to prepare the players. We still want to find moments to push the tempo and press, but you have to do it in an intelligent way. It’s really not possible in this weather to just press like crazy for 90 minutes.”

The Galaxy, which has played just two games in eight months because of the coronavirus outbreak, are also scheduled to play their first game since March on Monday. They will face the Portland Timbers.