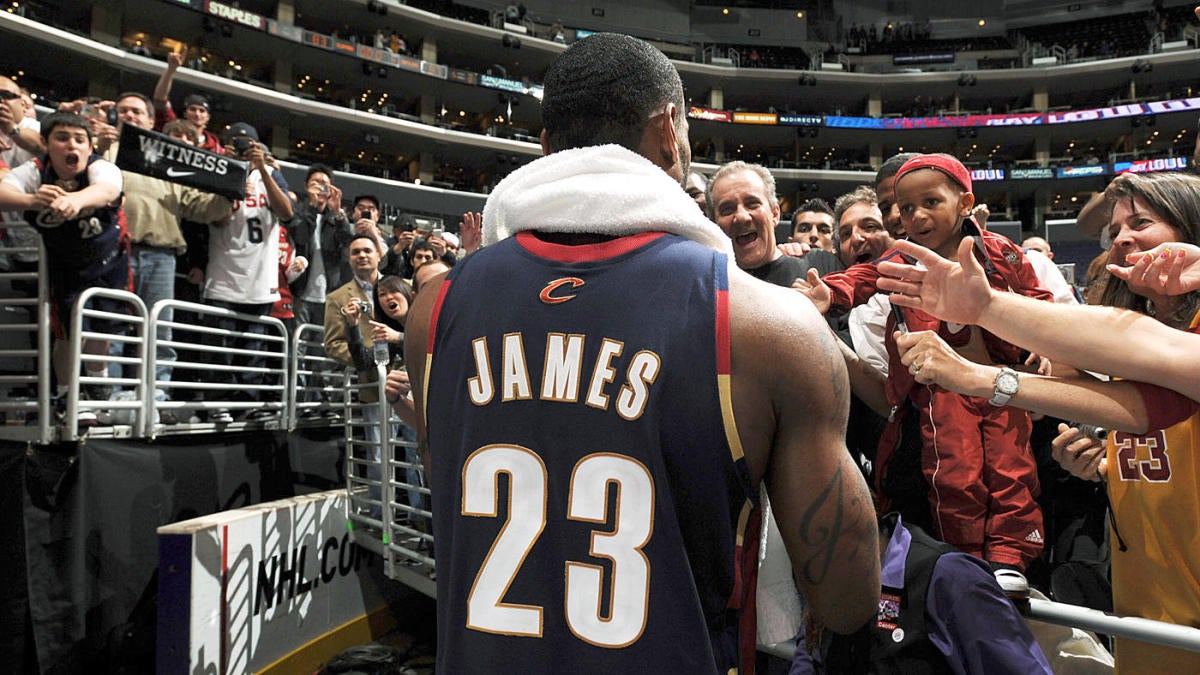 In honor of the 10th anniversary of “The Decision,” CBS Sports is reexamining LeBron James‘ 2010 decision to leave the Cleveland Cavaliers for the Miami Heat by wondering what might have happened had James signed elsewhere. In today’s edition, James heads to Los Angeles eight years early in order to sign with the Clippers.

LeBron James landed in Los Angeles in reality. The same logic would apply here. James would choose the Los Angeles market to ensure the continued growth of his off-court business interests. Picking the Clippers instantly forms a captivating rivalry with the Lakers, and being the first player to ever tip the Los Angeles scales away from those Lakers would be an instant boost to his legacy.

“I’m taking my talents to Hollywood and joining the Los Angeles Clippers.”

How does the next decade of NBA history go?

First thing’s first: There is no chance whatsoever that James would play for then-Clippers owner Donald Sterling. He is too smart and too well informed on racial politics to ever work for someone with Sterling’s history. This alternate history demands a change, and fortunately, one was possible at the time. Music mogul David Geffen attempted to buy the Clippers from Sterling in 2010, and in 2014, he claimed that James would have been interested had he completed the purchase. Geffen offered only $600 million for the Clippers at the time, and was rebuffed by Sterling. It’s not hard to see why. The Washington Wizards sold for $550 million at around the same time, while the Golden State Warriors went for $450 million. If Sterling was going to sell the Clippers, it was going to come at a premium that reflected the value of the Los Angeles market. With a commitment from James, we’ll say Geffen sees the potential windfall and ups his offer to an even $1 billion. That’s enough to pry the team away from Sterling.

The Clippers do not have enough money in this scenario to pursue a second superstar alongside LeBron, so they bide their time and continue building around the young core that is already in place. Miami misses out on James, but still lands Dwyane Wade and Chris Bosh. They use their third max salary slot to trade for Minnesota Timberwolves big man Al Jefferson. The rest of free agency proceeds largely by the numbers.

The expectation after LeBron’s move to Los Angeles was that he would find another veteran superstar to follow him. In reality, they hardly need one. Blake Griffin is so good as a rookie playing alongside James that pursuing the disgruntled Carmelo Anthony, another forward, doesn’t make sense. They sniff around Jazz point guard Deron Williams, but scoff at Utah’s obscene price when a far more affordable point guard upgrade presents itself. As little as Dan Gilbert wants to help LeBron, the Clippers convince the Cavaliers to swap Baron Davis and their unprotected first-round pick for veteran Mo Williams, reuniting him with James. That pick, in real life, turned into Kyrie Irving. These Clippers are significantly better, and that pick is subsequently worse. With them out of the picture, the team that would have occupied their lottery position is the Charlotte Bobcats, who eagerly take Irving No. 1 overall. Kemba Walker, whom Charlotte actually picked, falls to the Sacramento Kings.

The new-look Clippers are too young to win a championship in 2011, ultimately losing to the eventual-champion Dallas Mavericks in the Western Conference finals, but Griffin, DeAndre Jordan, Eric Gordon and future LeBron-favorite Eric Bledsoe are so promising that a future Clippers dynasty seems assured. That offseason, they consider pursuing Chris Paul in a trade with the New Orleans Hornets, but the Lakers, in a desperate attempt to swing the tide of Los Angeles momentum back in their direction, beat them to it. Gilbert lobbied heavily against allowing the Paul-to-the-Lakers trade in reality, but knowing that the alternative here would mean gifting him to LeBron, he keeps his mouth shut and David Stern agrees to allow the deal. With no other superstars available and no other major needs, the Clippers re-sign Jordan and use their leftover cap space on supplementary pieces Shane Battier and Jamal Crawford.

That gives the Clippers one of the deepest rosters in NBA history, which proves essential in a lockout-shortened season that robs them of Gordon. The Oklahoma City Thunder give them a series in the Western Conference finals, but once they get through that series, the aging Boston Celtics are no match in the NBA Finals. James wins his first championship, fittingly, against his old Eastern Conference rival.

The Lakers, again trying to prevent James from taking over their city, acquire Dwight Howard. On paper, that sets up a potentially legendary matchup between the two Los Angeles teams, but the Lakers never jell as Howard’s carefree personality clashes with the dictatorial Paul and Kobe Bryant. He leaves for Houston that offseason. Things aren’t quite as smooth for the Clippers. Gordon’s health remains a question mark, but with Crawford in place as the backup, the Clippers see no reason to pursue Ray Allen as the 2012-13 Heat did. Crawford misses the game-tying shot at the end of Game 6 of the Clippers’ series against San Antonio that Allen made for Miami in real life, and the Spurs go on to beat the Indiana Pacers to win the championship. Despite rumors of interest from Doc Rivers, Vinny Del Negro’s championship cache gets him a new contract. Without an obvious destination, Rivers stays with Boston for one more year before ultimately leaving Boston to take over as both coach and president of basketball operations for the New York Knicks.

The Clippers get their rematch with San Antonio a year later. The real-life Spurs used their 2013 loss as a motivator against LeBron the next season and took advantage of his decrepit supporting cast to dominate the Heat. Neither factor works in their favor this time around, as the Clippers are largely in their primes and have the entire year to plan their revenge. It takes them only five games to dispatch San Antonio before ultimately beating the Pacers and winning their second title.

Even after the championship, LeBron considers the idea of exploring free agency again in 2014. The issue he encounters is that while he is interested in a reunion with Cleveland, its roster isn’t nearly ready for him. Without Irving, the Cavaliers have the NBA’s worst record again during the 2011-12 season. That nets them the No. 2 overall pick based on that season’s lottery results. Michael Kidd-Gilchrist was the selection there, and he obviously does little to help their cause. So Cleveland has the best lottery odds again in 2013. That gets them the No. 2 pick for the second consecutive season, which they waste on Anthony Bennett. Despite their draft failings, the Cavaliers are out-tanked by the Philadelphia 76ers during the 2013-14 season. That ends with Philadelphia picking second and Cleveland picking third. Ironically, the Cavs’ bad lottery luck finally pays off. Andrew Wiggins and Jabari Parker are the first two selections, forcing the Cavaliers to “settle” for Joel Embiid. James doesn’t yet know what kind of player he will be though, and with Cleveland still in the toilet, he chooses to opt in to the final two years of his Clippers contract and see if Cleveland can improve by 2016.

That decision proves disastrous as Griffin’s injury woes begin in earnest during the 2014-15 season. His absence costs the Clippers two potential championship runs. The first goes to the Golden State Warriors, who take advantage of Minnesota’s lack of leverage to lowball the Timberwolves into trading them Kevin Love for Harrison Barnes and little-known backup Draymond Green. In reality, the presence of Cleveland as another suitor prevented the Timberwolves from accepting this package, but without James pushing for Love in Cleveland, Minnesota has no option besides accepting Golden State’s offer. The second title goes to Oklahoma City, which leads to Kevin Durant re-signing that summer. LeBron enters free agency for the second time in 2016 dead set on returning to Cleveland.

He doesn’t yet know what kind of player Embiid will be, but the Cavaliers, fortunately, do a bit better in their next two drafts, landing D’Angelo Russell in 2015 and Buddy Hield in 2016. The cap spike of 2016 allows the Cavs to bring in not just James, but Dwyane Wade, who was insulted by Miami’s low-ball offer that summer. Embiid returns to the fold that season as well, but as yet another injury knocks him out in the middle of the year, Oklahoma City winds up repeating as champions behind Durant.

With a healthy Embiid by his side, LeBron finally wins Cleveland its elusive first championship in 2018. The Cavs fail to repeat, though, falling to Kawhi Leonard’s Raptors in the postseason. Leonard bolts for Los Angeles that summer, but James doesn’t follow him. He already has enough of a foothold in Los Angeles from his time as a Clipper to put off moving back there for a few years, and with Embiid as his running mate, he believes he can compete for championships for the foreseeable future. So in the 2019 offseason, LeBron signs another max contract with the Cavaliers, vowing to finish his career in Cleveland.

Was this outcome better than LeBron’s reality?

Probably slightly worse. He still enters the 2020s with three championships, but none of them were won consecutively, and no matter what would have happened in Cleveland’s hypothetical 2018 title run, nothing could have matched the exhilaration of the Cavaliers coming back from a 3-1 deficit against a 73-win Warriors team. His odds of winning a fourth title are likely lower with Embiid than they are currently with Anthony Davis, thanks to Embiid’s injury history as well, so LeBron is probably happy that he waited before heading out west.