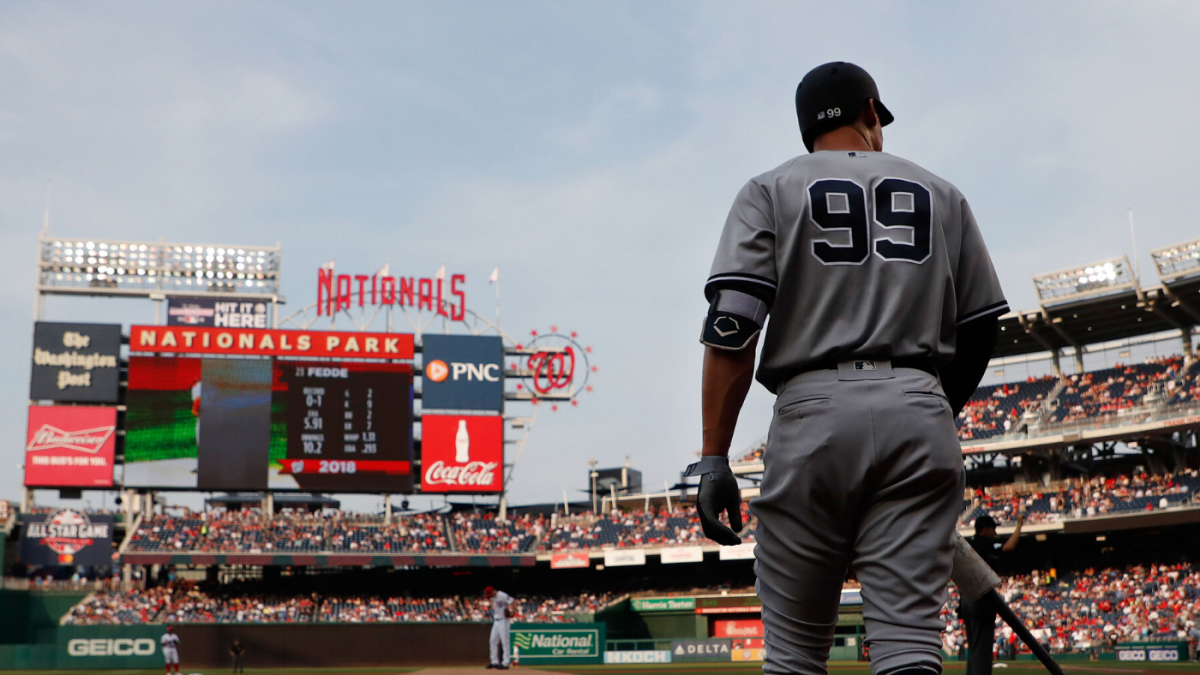 Watch Now: MLB Schedule Released: Biggest Takeaways (0:55)
A rivalry game between teams who each could conceivably make the postseason? That’s always going to play. It doesn’t hurt that Jacob deGrom is likely to get the nod, either.
This might be Francisco Lindor’s final Opening Day with the Cleveland franchise, so that’s worth enough novelty to land them here instead of last.
Now, on to the reason we’re all here.

The Phillies’ ample starpower bolsters this ranking. The Marlins look better on paper, but their upgrades are not notable enough to attract many unattached viewers.

Obviously. This is a potential World Series preview between last year’s champs and this year’s favorites that should feature a bevy of stars — Juan Soto, Giancarlo Stanton, Aaron Judge … — and about as good of a pitching matchup as you can get on paper, in Max Scherzer vs. Gerrit Cole. What more could you want in an opener?

The National League Central could be a four-team race. Two of those teams are featured here. The Cubs are entering a pivotal season that could double as a liminal space, depending on how things go. The Brewers are simply hoping their busy offseason will result in a third consecutive playoff appearance. Wrigley Field’s ivy is always lovely to look at this time of the year.

The Reds could well win the National League Central, but it’s hard to put this matchup very high — especially since the standard Opening Day festivities in Cincinnati won’t be happening.

If you squint, you can see either of these teams making a surprise run. You have to squint, though, because if you look at these teams with open eyes you’ll realize why it would be a surprise. The Rangers will be opening their new park, so we feel obligated to rank this a spot or two higher than it deserves based on the quality of teams involved.

Nevertheless, we’ve decided that everyone could use a little distraction these days. We’re playing ball, then, by ranking the Opening Day matchups based on their appeal to us as viewers. This exercise is, obviously, more of an art than a science. As a result, please do not get mad at us if your team’s matchup is lower than you’d like. Thank you.

This one should be fun. The White Sox are hoping to trace the Twins’ rise from last year, when Minnesota was a surprise division winner. The Twins, for their part, look capable of repeating. This series will provide the team debut of a number of notable free-agent signings, including Josh Donaldson, Yasmani Grandal, and Dallas Keuchel.

This is a sneaky-fun one. The Padres have oodles of young talent and added a few needed veterans to their lineup over the winter. The Diamondbacks are better than people realize, and this could well be Madison Bumgarner’s team debut.

The Rays could compete for the American League East crown, and figure to have Blake Snell on the mound. The Blue Jays, meanwhile, have all kinds of young hitting talent. This should mark the team debut of Hyun-Jin Ryu as well.

Every game between these teams is going to have postseason implications. If that’s not enough to draw you in, the A’s have one of the best lineups in baseball and a rotation full of promising youngsters while the Angels have Mike Trout, Anthony Rendon, and Shohei Ohtani.

Officially the second game of the season, the Giants and Dodgers’ longtime rivalry has seen better days. The Dodgers are arguably the best team in baseball, while the Giants remain a team in transition.

You can be excused for missing this one. The Orioles have arguably the worst roster in baseball and might not be the more depressing of the two teams. That’s because the Red Sox traded the second-best player in the game for an underwhelming package over the offseason.

Prior to the pandemic, one of the main questions was how opposing teams and crowds would greet the Astros. Now, this game will take place in Houston (possibly in front of an empty stadium) with anti-brawl rules in place. In so many words, it’s just another contest.

The Cardinals won the division in 2019 while the Pirates finished last. Neither team made many moves during the winter to add any sizzle or spice.

On Monday evening, Major League Baseball released the schedule for its modified 60-game season that is supposed to begin on July 23. Although Opening Day is just over two weeks away, it’s not a certainty that the league will be able to proceed with its plans due to the current state of the coronavirus pandemic.