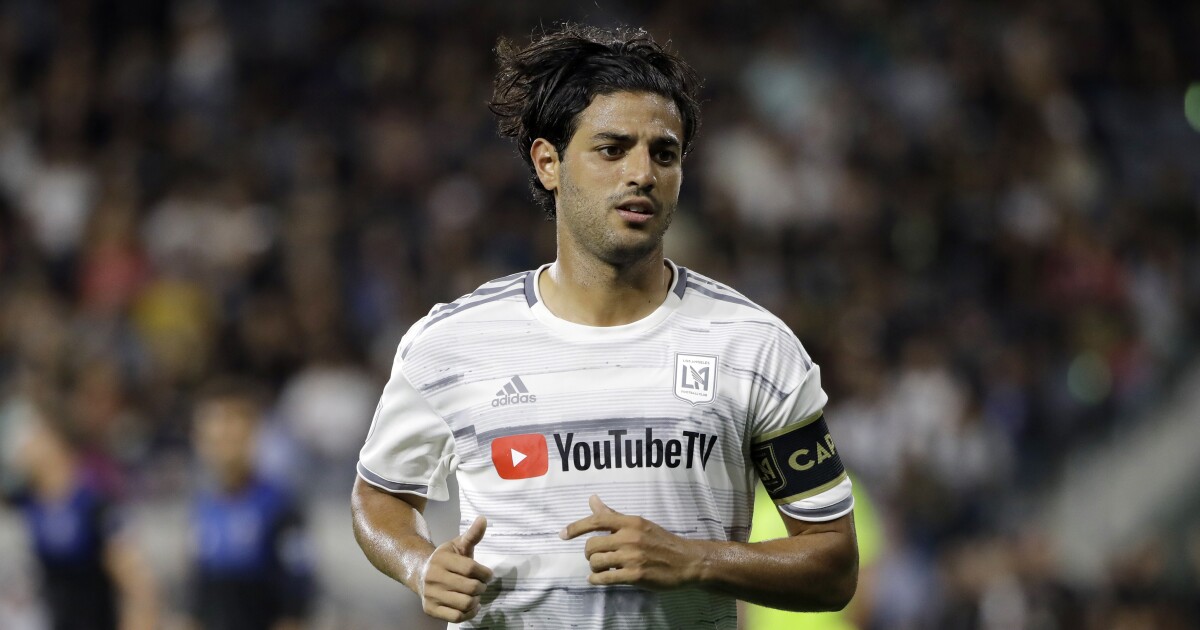 Major League Soccer’s return from its four-month COVID-19 suspension was dealt a pair of painful blows Monday when its best player and one of its original teams pulled out of the MLS Is Back tournament just two days before it is scheduled to begin.

LAFC’s Carlos Vela, the reigning MVP who broke the league’s single-season scoring record with 34 goals last season, is passing up the competition to remain in Southern California with his wife Saioa, who is pregnant with the couple’s second child. The absence of the Mexican national team star will rob the league’s made-for-TV tournament of its biggest draw.

Hours after Vela pulled out the league said FC Dallas, one of the league’s 10 founding franchises, would not compete in the tournament after 10 players and one coach tested positive for the coronavirus after arriving in Orlando, Fla., where the competition will kick off Wednesday behind closed doors at ESPN’s Wide World of Sports Complex.

“I would like nothing more than to be with my teammates in Orlando,” Vela said in a statement released by the club. “However it is in the best interest of the health of my family to stay home and be with my wife during what is a risky pregnancy.”

MLS gave players the right to opt out of the tournament for health or family reasons and LAFC had known for weeks that Vela, 31, was leaning strongly in that direction.

“I stand 100% behind Carlos,” LAFC coach Bob Bradley said. “It’s just important for him to be with his family right now. All his teammates feel exactly the same way. We always have a mentality that we do what’s best for players, we do what’s best for families. And that doesn’t change how we approach stepping on the field.

“So that’s the way we’re all thinking about it.”

FC Dallas’ players, meanwhile, have spent most of their 10 days in Florida quarantined in their rooms, leaving them unable to train. Over the weekend the league postponed Dallas’ opening game and will now have to redo the tournament schedule completely after pulling the team from the field.

“Given the impact of the number of positive tests on the club’s ability to train and play competitive matches, we have made the decision to withdraw FC Dallas,” MLS Commissioner Don Garber said. “The health of everyone involved in our return to play has always been our top priority, and we will continue to make decisions consistent with that priority.”

The setbacks are the latest in a series of stumbles that have marred the run-up to a tournament designed to make MLS the first male professional league to return to play since COVID-19 shut down most sports in early March.

Over the last 10 days at least 13 MLS players from three teams have tested positive since entering the MLS protective bubble at Disney’s Swan and Dolphin Resort and more positives are expected to be confirmed when the league announces the results of its latest round of testing. Since the league announced it was taking its competition to Florida in early June, coronavirus cases have soared in the state, making it the nation’s new coronavirus hot spot.

“The removal of FC Dallas from competition in Orlando is a reminder of how difficult the circumstances involving returning to work remains across all sports amidst this pandemic,” the MLS Players Assn. said in a statement.

Garber, who said the league could lose as much as a $1 billion to the pandemic, hoped to recoup some of that lost revenue by getting its teams back on national TV this week, nearly three weeks before the NBA, NHL and Major League Baseball resume play.

The Galaxy and LAFC were among the final five teams to arrive in Orlando, checking into the MLS resort Monday evening amidst stubborn rain and lightning. The other three teams — Toronto, Vancouver and Colorado — were originally scheduled to travel earlier in the month but had their departures delayed by COVID-19 testing issues.

LAFC wasn’t the only team that arrived without its captain since the Galaxy left Jonathan dos Santos home after the midfielder underwent surgery for a sports hernia last week. He is not expected to resume training until the team returns from Florida.

However, the Galaxy’s Javier “Chicharito” Hernández, who, like Vela, has a pregnant wife at home, did come.

Players from the Galaxy and LAFC were tested for the virus immediately upon arrival at the hotel, where they will be quarantined for the length of their stay for the five-week tournament. Both teams begin play July 13, with LAFC facing the Houston Dynamo and the Galaxy meeting the Portland Timbers.