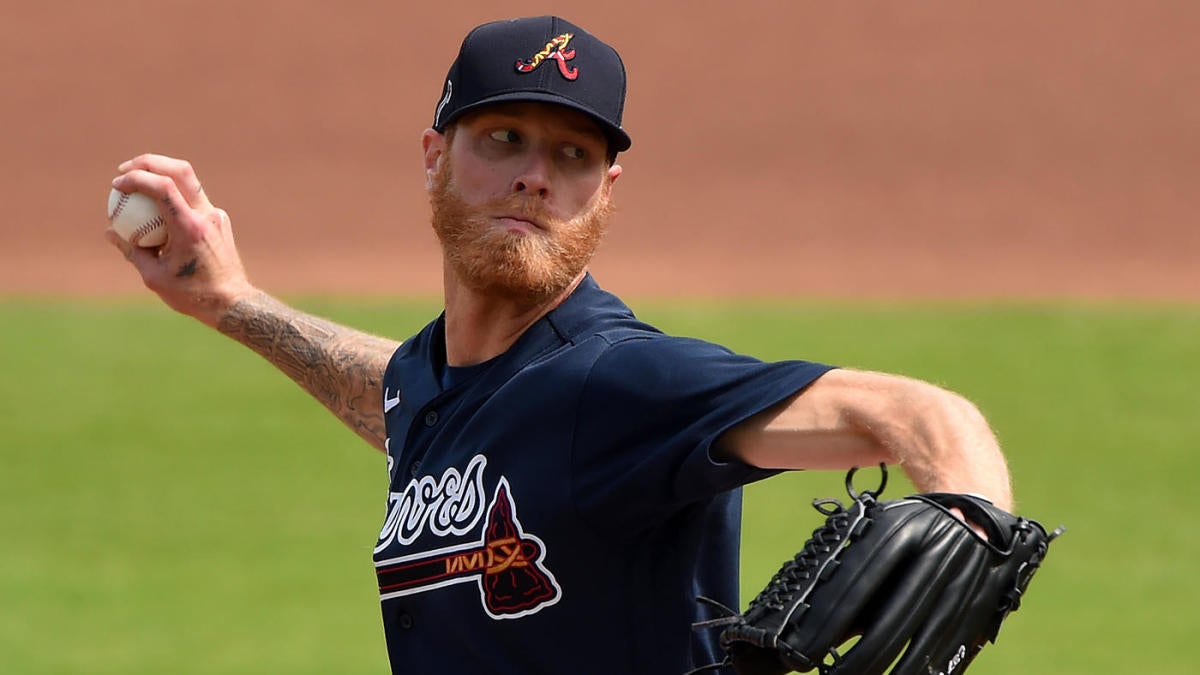 Watch Now: MLB Team To Watch In Shortened Season (1:17)
No doubt, spring elbow issues played a role in his 2019 struggles, and when he returned he struggled to command his breaking stuff. All of that led to a temporary banishment to the minors. Upon his return to the Atlanta rotation in early August, however, Folty thrived. Regard his digits over his final 10 starts of the regular season: 57 2/3 IP, 2.65 ERA, 55 SO, 17 BB. That’s more like it.
For those reasons, the Braves have realistic hopes that Ozuna will come much closer to that peak of 2017. Throw in the power-friendly nature of Truist Park, and Ozuna might just replace the cleanup spot production that Donaldson took with him to Minnesota.

Josh Donaldson enjoyed a major renaissance last season with the Braves, as he slashed .259/.379/.521 (127 OPS+) with 37 home runs and 100 walks in 155 games. The Braves, however, let him walk, and Donaldson inked a four-year pact with the Twins. Let’s talk about the loss of his offensive production.

There’s some closer uncertainty here. Melancon is probably in line to get the save opps to start the season, but he hasn’t functioned at his peak since 2016. He’s now 35. Should Melancon fail to pin down the job, then Greene or Smith could step in. It’s also possible that manager Brian Snitker could play matchups with Smith from the left side. To the extent that it matters, Greene and Smith both have experience closing.  As we’ll explore below, Foltynewicz is perhaps the leading X-factor in the rotation. Hamels is aging and has a recent injury history of note, and expectations for Hernandez — although he looked strong during spring prior to the shutdown — should be exceedingly modest. The Braves still have a number of promising young rotation arms — arms like Ian Anderson, Kyle Wright, Touki Toussaint, and Bryce Wilson — that should be ready and available in the event that reinforcements are needed because of injury or ineffectiveness. Soroka, who doesn’t turn 23 until August, looks like a present and future ace at the front end.
The Braves have a deeply impressive young core and in 2020 will be gunning for their third straight NL East title. In most quarters, though, they’re not the favorites. The division has four teams with legitimate designs on the postseason, and one of those teams — the Nationals — happens to be the reigning champs. Atlanta projects as a winning team, but free-agent losses and a still uncertain rotation dim their outlook just a bit.

Last season, the Braves ranked third in the NL in runs scored and third in OPS. Once you adjust for the effects of the Braves’ home ballpark — a hitter-friendly environment — they still had an above-average attack but not quite as strong as the unadjusted numbers would suggest. The Braves notably failed to re-sign slugging third baseman Josh Donaldson, and they’ll hope that Ozuna can replace the power he took with him to Minnesota. We’ll have more on those prospects below. Obviously, much depends upon Freddie Freeman’s ability to return to vintage form following elbow surgery.

So which version of righty starter Mike Foltynewicz shows up for the abbreviated 2020 season? In 2018, he authored what looked like a breakout campaign with a 2.85 ERA and 3.37 FIP across 183 innings. Last season, however, he backslid to the tune of a 4.54 ERA and 4.97 FIP. Foltynewicz is a former first-rounder and top-100 overall prospect, so the ceiling he showed in 2018 is in keeping with expectations. Can he get back there, though?
Since last season, the Braves have lost Julio Teheran and Dallas Keuchel and their total of 52 useful starts. Hamels is new to the fold, but age and recent injury concerns temper expectations. There’s no better way to replace those lost contributions than having Foltynewicz pitch something like he did after his return from the minors last season. If his repaired slider is still intact, then all of that may be a reasonable expectation for 2020.

At a fundamental level, the Braves’ 2020 season will be considered a failure unless they make the playoffs and go deep. That’s because the Braves have not advanced past the NLDS round since way back yonder in 2001. That span includes nine postseason trips without ever reaching the NLCS. Including last year’s loss to the Cardinals in five games, the Braves since 2001 are 12-25 in playoff games. That needs to change in 2020.
To an extent, this applies to every NL East team, but consider the docket ahead of the Braves. They’ll play 10 games against each of their NL East fellow travelers, and three of those four teams — the Phillies, Mets, and reigning World Series champion Nationals — are projected by SportsLine to be winning teams in 2020. The regional schedule for 2020 also means that the teams of the NL East will be matched up against the teams of the AL East. That means the Braves will play at least another 12 games against the Yankees, Rays, and Red Sox, who are project as winning teams in 2020. That’s at least 42 of 60 games against some of the better teams in baseball. The Braves rightly aspire to win the NL East for a third straight year, but if they wind up competing across divisions for one of the two NL wild card spots then that rough schedule could be a major factor.

2020 Sportsline projection: 31.8 wins, 2nd place in NL East
World Series odds (via William Hill Sportsbook): 17/1
2019 record: 97-65 (lost in NLDS)
By and large, the Braves’ hopes for replacing Donaldson’s bat rest on the shoulders of Marcell Ozuna. Atlanta signed the slugging outfielder to a one-year contract after a solid two seasons with the Cardinals. On St. Louis’ watch, however, Ozuna failed to reach the heights of his 2017 campaign with the Marlins, when he clouted 37 home runs and put up an OPS+ of 149. Given the rest of his body of work, it seems unlikely that Ozuna is going to produce like that again. However, Ozuna last season put up highly impressive batted-ball and quality-of-contact indicators — indicators that say he was significantly unlucky to put up an OPS+ of just 107. Consider:  Now for a deeper dive into the state of the 2020 Braves as the start of the season looms.

The bench boasts a strong crop of right-handed bats that can be platooned with lefties like Markakis and Inciarte. Less ideal is that switch-hitter Camargo has historically been better from the right side.