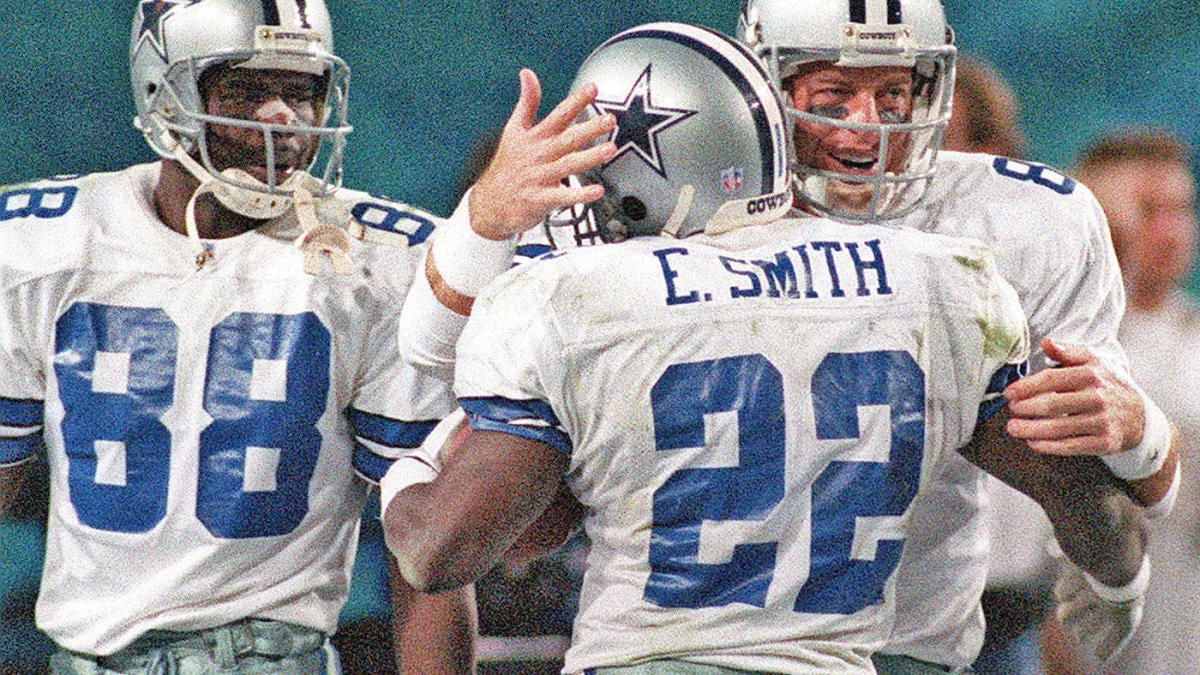 The 49ers were the NFL‘s flagship team as the league entered into the 1990s. San Francisco’s roster, filled with stars that included Joe Montana, Jerry Rice and Ronnie Lott, played an instrumental role in the league’s continued growth in popularity during the 1980s. But as the league entered the new decade, several new teams would begin to make their claim as pro football’s next best thing.

One of those teams, the Dallas Cowboys, would ultimately steal the title from the 49ers as pro football’s dominant team. But the Cowboys, as great as they were, wasn’t the only team that made a lasting imprint on pro football during this time. Furthermore, the Cowboys’ epic duels with the 49ers, as great as they were, wasn’t the only compelling rivalry during the ’90s. Both teams also had to contend with Brett Favre and the Packers, who by decade’s end would supplant both teams as the NFC’s elite team. And there was also this team in Buffalo that you might have heard of, a team that went to four consecutive Super Bowls while denying a certain future Hall of Fame quarterback/coach combo the chance at winning a Lombardi Trophy together during a pivotal point in their careers.

With the recent conclusion of the NFL’s 100th season, we decided to take a look at pro football’s top five rivalries during the ’90s. It’s safe to say that these rivalries have aged better than Zubaz pants, Walkmans and Pogs. But don’t take my word for it.

Despite making the playoffs seven times during the ’90s, the Dolphins, led by the Hall of Fame trio of head coaches Don Shula and Jimmy Johnson and quarterback Dan Marino, were not able to advance to the big game. The team that stood in their way the most was the Bills, who defeated the Dolphins in three of their four postseason matchups.

Fittingly, the Bills’ first of four consecutive Super Bowl runs during the decade began with a divisional round playoff game against the Dolphins. In a game that featured the passing exploits of Marino and Bills Hall of Fame quarterback Jim Kelly, the Bills jumped out to a 20-3 lead en route to a 44-34 victory. Marino and Kelly combined to throw for 662 yards and six touchdowns, while the Bills Hall of Fame receiving duo of Andre Reed and James Lofton combined to catch 11 passes for 271 yards and three touchdowns. Bills running back Thurman Thomas rumbled for 117 yards and two touchdowns, as the two teams combined to tally 48 first downs and 923 total yards despite playing most of the game in a blizzard.

Trailing 27-10 midway through the second quarter, two Marino touchdowns help trim Miami’s deficit to just three points at the start of the fourth quarter. Kelly, picked 13 spots ahead of Marino in the 1983 NFL Draft, responded with touchdown passes to Thomas and Reed, as the Bills’ lead was pushed back to 17 points. While Marino responded with an 8-yard touchdown pass to Tony Martin, it was too little too late, as the Bills advanced to the AFC Championship game, where they would dominant the Raiders, 51-3, before losing their first of four consecutive Super Bowls.

The Broncos had won 14 of their first 20 games against the Chiefs after drafting John Elway in the 1983 draft. The Chiefs, who had spent most of that time looking up at the Broncos in the AFC West division standings, received a much needed shot in the arm after acquiring future Hall of Famers Joe Montana and Marcus Allen during the 1993 offseason. That season, the Chiefs won their first division title since 1971 en route to an appearance in the AFC Championship game.

Matched up against the Broncos in Week 7 of the 1994 season, the visiting Chiefs fell behind by four points after Elway scored on a 4-yard run with 1:22 left. As he did throughout his career, Montana cooly led the Chiefs on a game-winning, 75-yard drive that culminated with his 5-yard touchdown pass to Willie Davis.

With Montana three years into retirement, the Chiefs were unable to pull off a similar comeback against the visiting Broncos in the divisional round of the 1997 playoffs. Protecting a 14-10 lead, Denver’s defense held off a desperate final drive by the Chiefs, as the Broncos (who received 101 rushing yards and a touchdown by Hall of Fame running back Terrell Davis) won the first-ever playoff meeting between the two longtime rivals. Elway and the Broncos would eventually go onto win their first Super Bowl while becoming the first AFC team in 14 years to hoist the Lombardi Trophy.

Like many future Super Bowl champions, Brett Favre, Reggie White and the rest of the 1990s Packers had taken their lumps against an established champion before hosting the Lombardi Trophy. In the Packers’ case, the established champion was the Dallas Cowboys, a team that would make history during the decade by winning three Super Bowls in a four-year span.

After defeating the Packers in the previous two postseasons, Dallas welcomed Green Bay to Texas Stadium for the 1995 NFC Championship game. The Packers, who had upset the defending champion 49ers the previous week, quickly found themselves in a 14-3 hole after Troy Aikman hit Michael Irvin for a pair of first quarter touchdowns. Favre, who won his first of three consecutive MVP trophies that season, responded with a 73-yard scoring strike to Robert Brooks and a 24-yard touchdown pass to tight end Keith Jackson. A one-yard touchdown pass from Favre to Brooks gave the Packers a 27-24 lead with just over five minutes remaining in the third quarter.

Undaunted, the Cowboys embarked on a 90-yard drive that included four consecutive completions from Aikman, who finished the game with a 107.5 passer rating. Five plays after a 5-yard touchdown run by Smith gave the Cowboys the lead, Larry Brown’s interception of Favre set up Smith’s game-clinching touchdown. While Favre and the Packers ended Green Bay’s championship drought the following season, the Cowboys are eternally remembered as the Team of the ’90s, partly due to their success over the green and gold.

After shocking the 49ers in the divisional round of the 1995 playoffs, the Packers posted convincing wins over San Francisco during the next two postseasons. Green Bay’s dominance over the 49ers enabled them to win two NFC titles and a Super Bowl over that span.

While the Packers were a cut above the 49ers the previous three seasons, the two teams were virtual equals when San Francisco hosted Green Bay in the 1998 NFC Wild-Card round. While both offenses featured future Hall of Fame quarterbacks in Brett Favre and Steve Young, both teams enjoyed considerable success on the ground, as Dorsey Levens and Garrison Hearst each rushed for over 100 yards.

Trailing 23-20, a 15-yard touchdown pass from Favre to Antonio Freeman gave Green Bay a 27-23 lead with two minutes left. Young, playing in his final playoff game, got his team to the Green Bay 25-yard-line with eight seconds left. With the 49ers’ season in the balance, Young did not look to Jerry Rice and instead fired the game-winning pass to Terrell Owens, who dropped several passes earlier in the game. This time, despite getting hit by several Packers, Owens held onto the ball while etching his name in NFL lore in the process.

With respect to the Bills and Chargers, the Super Bowl was essentially played between the 49ers and Cowboys from 1992-94. For three straight years, San Francisco and Dallas faced off in the NFC title game, with the Cowboys winning the first two matchups before dispatching the Bills in Super Bowls XXVII and XXVIII. The 49ers dethroned the Cowboys in the ’94 title game before dismantling the Chargers in Super Bowl XXIX.

In the 1992 NFC title game, a 16-yard touchdown run by Emmitt Smith gave the underdog Cowboys a 24-13 fourth quarter lead. But after Steve Young’s 5-yard touchdown pass to Jerry Rice pulled the 49ers to within striking distance, a 70-yard pass from Troy Aikman to Alvin Harper set up Aikman’s game-clinching touchdown pass to Kelvin Martin.

Two years later, the two teams faced off again in Candlestick Park for the right to play in the Super Bowl. Like a heavyweight fighter in search of a first round knockout, the 49ers scorched out to a 21-0 lead before the Cowboys could blink. While Dallas eventually found its footing, they were never able to catch up to the 49ers, who came away with a 38-28 win. The day’s biggest winner was Young, who finally escaped the shadow of Joe Montana while finally leading San Francisco to the Super Bowl.