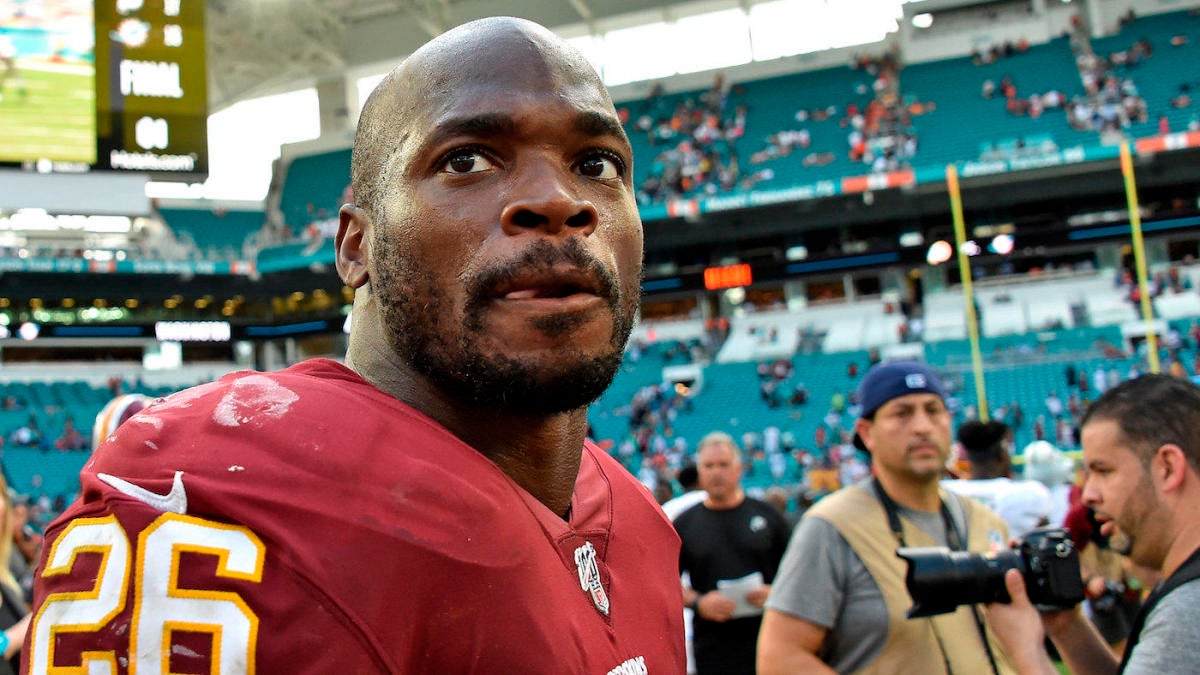 Watch Now: Time to Schein: Dalvin Cook will hold out for a ‘reasonable’ contract (4:05)

Adrian Peterson doesn’t like how running backs are valued in today’s NFL. “It’s disrespectful to be honest with you,” Peterson told TMZ Sports. Peterson thinks the pay structure is going to change for the better. He cited the group of young running backs currently in the game. Peterson, who is entering his 14th NFL season, also pointed to his and 37-year-old Frank Gore’s longevity to bolster his case for ending the undervaluing.

Peterson’s optimism will be hard-pressed to become a modern-day NFL reality. The deck is stacked heavily against running backs regaining the standing in the NFL salary hierarchy the position had almost a decade ago.

Recent history of running back compensation

Adrian Peterson and Chris Johnson took running back salaries to a new level in 2011 after several years of stagnation by signing deals that put them among the NFL’s five highest paid non-quarterbacks. Johnson signed a four-year contract extension with the Titans averaging $13,493,750 per year and containing $30 million in guarantees after a lengthy preseason holdout. Peterson subsequently received from the Vikings a six-year, $85.28 million extension which included $36 million in guarantees and an additional $4 million in base salary escalators.

The running back market started steadily declining a couple of years later before hitting a low point in 2017, when there no longer were any running backs with multi-year contracts averaging $10 million per year or more. The highest-paid running back at that time was Devonta Freeman with the five-year extension averaging $8.25 million per year he received from the Falcons that preseason.

A reversal started in 2018 when the Rams signed Todd Gurley to a four-year, $57.5 million extension (worth a maximum of $60 million through salary escalators) with $45 million in guarantees. At $14.375 million per year, Gurley’s deal represented an almost 75 percent increase over Freeman’s extension. While that’s a substantial increase, Gurley’s contract averaged just over one percent more than Peterson’s 2011 deal. In the seven years since Peterson signed, the salary cap had gone up approximately 47 percent.

David Johnson helped proved Gurley’s deal wasn’t a market anomaly. Hours before the Cardinals‘ 2018 regular season opener, Johnson signed a three-year, $39 million extension with $31,882,500 in guarantees. The deal was worth as much as $45 million through incentives.

Le’Veon Bell further solidified the dramatic reset of the running back market Gurley started during 2019 free agency. The three-time All-Pro running back signed a four-year, $52.5 million contract with the Jets containing $35 million in overall guarantees. Incentives and salary escalators made the maximum value of the deal $60.15 million.

Ezekiel Elliott replaced Gurley as the NFL’s highest-paid running back shortly before the 2019 regular season started when he ended his nearly 40-day holdout from the Cowboys. He became the first running back in the league history to sign a $100 million contract. Elliott, who had two years remaining on his rookie contract, received a six-year, $90 million extension. The two-time rushing champion established new standards for running backs with $50,052,137 in overall guarantees and $28,052,137 fully guaranteed at signing.

Panthers running back Christian McCaffrey is the new salary benchmark at the position after become the third player to ever have at least 1,000 rushing yards and 1,000 receiving yards during the same season in 2019. He signed a four-year extension averaging $16,015,053 per year with $39,162,500 of guarantees in April. McCaffrey had a running back-best $30,062,500 fully guaranteed at signing.

McCaffrey’s contract lags far behind Peterson and Johnson’s when put into further context. There are currently 36 non-quarterbacks with long-term deals averaging more than McCaffrey’s. When adjusting Peterson and Johnson’s contracts for salary cap inflation since 2011 (64.65 percent), their respective deals equate to almost $23.5 million per year and practically $22.25 million per year, respectively, under the current $198.2 million salary cap.

Return on heavy running back investment

The running backs that have gotten paid aren’t doing the younger group any favors with their recent performances. Overall, teams aren’t getting a good return on the investment. Johnson had a subpar 2018 after getting his contract and became an afterthought in Arizona’s offense last season once Kenyan Drake was acquired from the Dolphins in a midseason trade. Johnson is getting a new lease on his NFL life after his offseason trade to the Texans. Bell had his worst season as pro in 2019.

Gurley wasn’t the same after injuring his left knee late in the 2018 season. The 2017 NFL Offensive Player of the Year had career-lows of 857 rushing yards and 1,064 yards from scrimmage (combined rushing and receiving yards) in 2019. Gurley’s March release means he didn’t play any of his new contract years, since his four-year extension ran from 2020 through 2023. He made out like a bandit from the deal and is $20 million better off from the extension than playing out his rookie contract. Gurley quickly signed a one-year deal for $5.5 million with the Falcons.

Elliott did the most to justify his payday. He hit the 1,000-yard rushing mark for the fourth straight time. Although Elliott was fourth in the NFL with 1,357 rushing yards, he averaged a career low 84.8 yards per game on the ground. Prior to this season, Elliott had averaged 101.2 rushing yards per game for his career.

Next to get paid

A common denominator with the running backs who have gotten the top deals during the resurgence is their dual threat capabilities. Derrick Henry may become the exception, as he doesn’t add much in the passing game. Henry is more of a traditional ball-carrier from the previous era. Nonetheless, Henry is Tennessee’s best offensive player.

Henry really made his mark in the playoffs during the Titans’ run to the AFC Championship Game after leading the NFL in rushing (1,540 yards) and tying for the league’s most rushing touchdowns last season. He became the first player to ever have two games of at least 180 rushing yards in the same postseason. Henry also set an NFL record for the most rushing yards during a playoff run (not including the Super Bowl) with 446. His 148.7 rushing yards per game this postseason is the fourth-best mark ever in any single postseason.

Titans general manager Jon Robinson is hoping to find common ground with Henry, who was designated a franchise player for $10.278 million, on a long-term deal. Time is running out because July 15 is the deadline for franchise players to sign multi-year contracts. It would be surprising for any long-term deal Henry signs to top Johnson’s 2011 average yearly salary.

Dalvin Cook, who is scheduled to make $1,331,361 in the final year of his four-year rookie contract, vowed last month to hold out unless he gets what he considers a reasonable new deal from the Vikings. I don’t begrudge any running back attempting to take a stand contractually because of the position’s relatively short shelf life, notwithstanding Gore and Peterson’s longevity, but Cook is probably just posturing. A training camp holdout would prevent Cook from getting the fourth year of service towards free agency necessary to become an unrestricted free agency in 2021 should he play out his rookie contract. He would a restricted free agent next offseason under those circumstances.

The Vikings are reportedly ready to try to bridge the gap with Cook, who had a breakout 2019 season with career highs of 1,135 rushing yards, 1,654 yards from scrimmage and 13 touchdowns, after making an initial offer believed to be well below $10 million per year. A reasonable deal for Cook undoubtedly will be under the $14,213,333 per year in Peterson’s 2011 extension.

The Bengals and Joe Mixon, who is also heading into the final year of his rookie contract, reportedly had discussions about a new deal in the spring. Mixon has posted back-to-back seasons with over 1,100 rushing yards where he ranked in the NFL’s top ten in rushing. Over the last two seasons, Mixon’s 2,305 rushing yards are seventh in the NFL. Just like Cook, Mixon is prepared to hold out absent a new contract. He would be in the same boat as Cook if his rookie contract expires.

Saints running back Alvin Kamara is one of the most interesting cases in the league. Conventional wisdom suggested that Mark Ingram’s departure to the Ravens in free agency last offseason would lead to an increased workload for the supremely talented Kamara, but the 2017 NFL Offensive Rookie of the Year was slowed by knee and ankle problems. The Saints offense didn’t really miss a beat with Latavius Murray shouldering the load in the two games Kamara missed last season. Coming off an injury-plagued season and heading into a contract year isn’t the ideal circumstance for a big payday. Nonetheless, Kamara’s 243 receptions in his three seasons are the second most ever for a running back through his first three NFL years behind McCaffrey’s 303. His 4,476 yards from scrimmage since 2017 are the league’s fifth most during this span.

Chris Carson (Seahawks), James Connor (Steelers), Leonard Fournette (Jaguars), Aaron Jones (Packers) and Marlon Mack (Colts) will also have expiring rookie contracts after the 2020 season. The COVID-19 pandemic could lead to an increased number of running backs in free agency next year since teams are being more cautious in signing core players to new contracts with league revenues expected to drop and impact the 2021 salary cap due to games potentially being played in empty stadiums or in front of limited fans. A surplus of available of running backs could result in rude awakening financially for some on the open market.

None of the running backs mentioned are expected to surpass McCaffrey’s deal, but 2018 NFL Offensive Rookie of the Year Saquon Barkley is the best bet to raise the salary bar for running backs. He will be eligible for an extension at the conclusion of the 2020 regular season. The odds of Barkley becoming one of the league’s highest paid non-quarterbacks is quite remote.

Barkley had a league-best 2,028 yards from scrimmage as a rookie in 2018 but was slowed by a high ankle sprain last season. He still had 1,003 rushing yards last season despite missing three games. The Giants won’t have to contend with paying Barkley while a high-priced quarterback is already on the books, as 2019 sixth overall pick Daniel Jones will be entering the third year of his cost-effective rookie contract in 2021.

There’s a competing school of thought in the NFL that a team should avoid giving a running back an extremely lucrative second contract unless he’s a special talent. It may gain more traction if the running backs paid at the highest level continue to underperform. The preference under this philosophy is to go year-to-year with a fifth-year option, when applicable, and use franchise or transition tags until no longer economically feasible. Simultaneously, an attempt to find a suitable replacement in draft is made either toward the end of the rookie contract or while the veteran is playing under a designation. This protects against overpaying while a running back is in his late twenties when he is likely to be in decline because of high mileage.