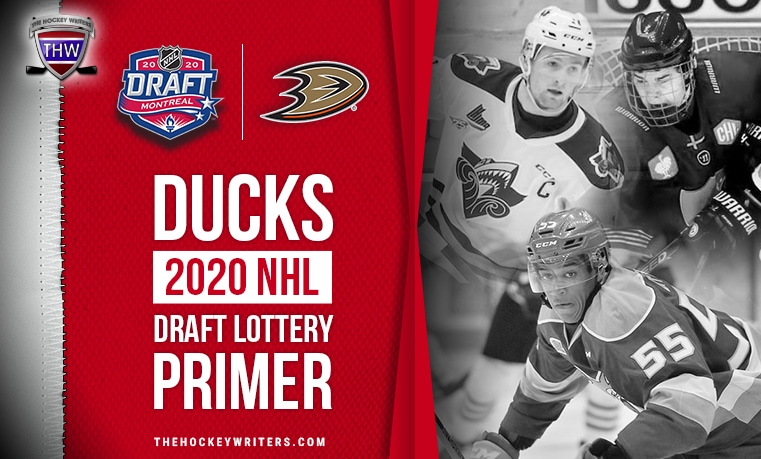 While 24 teams are preparing for the new NHL playoff format, the Anaheim Ducks are one of seven teams whose focus is on the 2020 NHL Draft Lottery. Like the playoffs, the lottery has been reworked for this year. Phase One will take place on June 26 to determine who will have the top three picks.

The First Phase will consist of three drawings and include the seven teams whose season ended and eight placeholder positions. If a team not in the bottom seven wins any of the first three drawings, a Second Phase will be conducted among the eight teams eliminated in the qualifiers. That would take place between the end of the qualifiers and the first round of the playoffs.

It’s understandable if you’ve tuned out hockey over the last few months. As a reminder, the Ducks finished 26th in the standings, the fifth-worst record in the NHL. Therefore, they have the fifth-best odds of winning the draft lottery on Friday. If three teams from the bottom seven take up the top three selections than there will be no need for Phase Two. However, if one of the placeholder teams moves into the top three, a second phase will determine which team that is.

The odds for the 2020 Draft Lottery are as follows:

The odds for Phase Two will be split proportionately among the placeholder teams with each having a 12.5% chance at winning.

Where Could the Ducks End Up?

You may have noticed the Ducks could land anywhere inside the top eight except for fourth. With three separate draws for first, second and third, those are the only positions they could move up from fifth in to. On the flip side, the can only fall as far as eighth, and only if three teams below them in the standings occupy the top three selections. It’s an interesting predicament, but one that still guarantees they will be in a better position than last year when they took Trevor Zegras ninth overall.

In the last 14 years, the Ducks have only had three picks in the top ten: Hampus Lindholm in 2012, Nick Ritchie in 2014, and Zegras in 2019. No matter where they end up this year, they’ll add another top ten pick to that list.

Who Could They Select?

Fellow Anaheim Ducks contributor Anthony Ciardelli and I wrote a series of articles breaking down the top ten targets for the Ducks in the 2020 NHL Entry Draft.

The Ducks have a good mix of defensemen, wingers and centers available no matter where the team picks. General manager Bob Murray mentioned in a press conference earlier this month how excited he is for the draft:

We’re going to get a good player this year, and we have three picks in the top 36 as of right now. I’m looking forward to this year’s draft, and we’ll add to our young depth that has started to grow here.

Outside of Trevor Zegras, the Ducks lack an elite-level prospect in their system. Here are a few of the Ducks’ top prospects at each position.

Where, When, and How To Watch

If you want to join us live on Friday we’ll be broadcasting our live reactions on Twitch with other Ducks fans over at twitch.tv/forevermighty. If you can’t make it live, the video will be recorded and posted on our website www.forevermighty.com. Hopefully, we’ll be celebrating a draft lottery win, but either way, we’ll be there to break down the results.