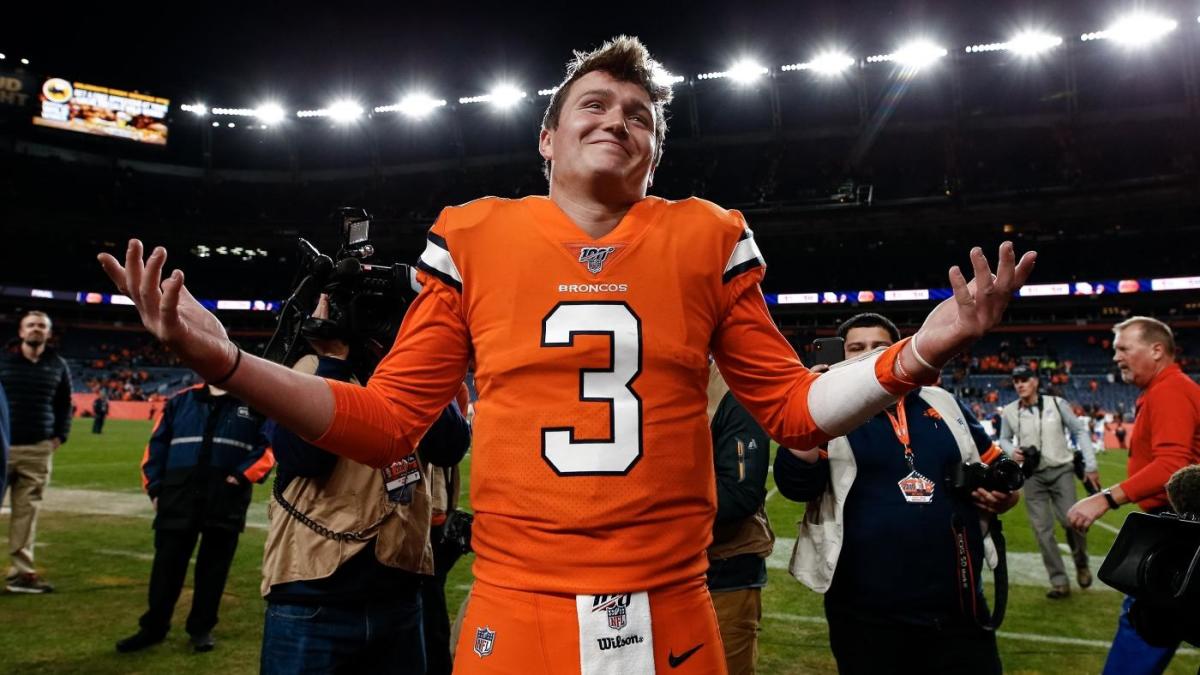 Midway through the 2019 NFL season, it looked like Drew Lock was bound for a full redshirt season during his first year in the league.

But the Denver Broncos quarterback situation got so bad, the team turned to its second-round pick, and he thrived down the stretch. Imagine that.

With the fate of the Broncos firmly in Lock’s hands, let’s explore everything about his environment in Denver and what Locks needs to do to take the next step as a quarterback.

How Lock has improved since he was a prospect

These positive developments in a quarterback’s game are noteworthy because they indicate the distinct possibility of future growth.

Here’s a snippet of what I wrote about Lock before the draft; my stylistic comparison for him was Matthew Stafford:

Lock is a cannon-armed pocket passer capable of making the jaw-dropping throws down or across the field who plays the game with “shooter’s amnesia.” If he makes a bad decision or throws a pick, it doesn’t impact his aggressiveness on the next play or series. He can effortlessly throw from a variety of arm angles, and the arrow is pointing up in terms of his pocket patience and presence, although hiccups in those areas are still present. He won’t run away from many NFL linebackers but can pick up yards with his feet when needed, and his accuracy downfield is more impressive than his touch on short passes. Sounds a lot like Stafford.

He finished with the third-highest grade in my season-long evaluation of all the plays of first- and second-year quarterbacks (out of 17 who played). He had an “A-” and a “B-” along with three outings in the “C” range in his five starters as a rookie. While Lock was solid, the size of the sample must be considered with his third-place finish.

Like most of the other quarterbacks already evaluated in this project, Lock played very similarly to how he performed at Missouri from a style perspective. And given my high opinion of him as a prospect — Lock was my QB1 in the 2019 class — it would’ve been difficult for him to make a clear-cut stride forward in such a short audition as a rookie.

He had no conscience when it came to ripping tight-window throws at the intermediate level, was mostly steady albeit unspectacular inside the pocket, had some blatant misfires, and dropped some dimes downfield.

Trapasso joined Will Brinson on the Pick Six Podcast to talk about what Lock and other young QBs must do to take the next step; give it a listen below and be sure to subscribe on your favorite podcast platform.

For the modern-day description of Lock’s supporting cast, think multiple flame emojis. John Elway reloaded the receiver group in a hurry after the heyday of Demaryius Thomas and Emmanuel Sanders.

During his second year in the league, Courtland Sutton registered a hefty 2.48 yards per route run figure in 2019, the 12th-highest in football with Joe Flacco, Brandon Allen, and five games with Lock. At 6-foot-4 and 220 pounds with phenomenal ball skills and flexibility to create separation, he’s ready to become a superstar.

Jerry Jeudy, the most electric, NFL-ready route-running prospect we’ve seen in quite some time was picked at No. 15 overall. In Round 2, Elway drafted Penn State’s K.J. Hamler, a wideout with track speed who averaged just under 17 yards per grab and scored 14 touchdowns during his two years in college.

After LSU’s center Lloyd Cushenberry was picked in the third round, Lock’s familiar and former favorite target Albert Okwuegbunam was added. In 2017 and 2018, Okwuegbunam caught a combined 72 passes, 881 yards, and 17 touchdowns during Lock’s time as the starter for the Tigers. Hefty numbers for a tight end, and Albert O managed those stats as a 19 and 20 year old. He also ran 4.49 at the combine.

Lock was pressured on 36% of his drop backs in 2019 in Denver, a pretty high figure. A healthy Ju’Wuan James would go a long way toward an improvement of Denver’s blocking unit. The veteran right tackle, signed last offseason, missed all but three games in his debut season with the Broncos.

Altogether, Denver’s line is average with some upward mobility due to James’ return. The receiver group is young and ultra-explosive. I still haven’t even mentioned last year’s first-round pick, tight end Noah Fant. The running back group is rock solid with Phillip Lindsay and free-agent add Melvin Gordon. The Broncos offense has immense potential.

Moving from Rich Scangarello to Pat Shurmur at offensive coordinator should provide a smooth transition for Lock, as both coordinators have roots in the West Coast Offense — Scangarello indirectly a Mike Shanahan disciple, Shurmur directly an Andy Reid disciple.

Shurmur utilizes more spread concepts — which will be familiar to Lock from his Missouri days — yet the foundation for the offense will not represent a sizable alteration from his encouraging rookie campaign. That’s good.

During his five-game stint on the field in 2019, Lock didn’t test it deep nearly as often as he did in college, a development that wasn’t shocking simply based on the aggressive nature of the Air Raid system he ran in 2017 under Josh Heupel and even in Derek Dooley’s more “traditional” offense in 2018 that frequently highlighted Lock’s monster arm.

Lock averaged 6.9 Intended Air Yards as a rookie per Next Gen Stats, the seventh-lowest rate among qualifying signal callers. Of his 156 attempts last season, just 11 of them were in the air 20 or more yards down the field. A 7% downfield rate is very low. If he’s to threaten with his arm strength to the full extent, he needs to take more chances deep. His accuracy on downfield throws was 36.3%, slightly below the league average of 42%, per Pro Football Focus.

Lock needs to get more aggressive in Year 2, there’s no doubting that.

Also, toward the end of his rookie season, Lock had moments in which he was seemingly fooled by disguised coverages or took big risks that were nearly intercepted. His worst performance of the season, in a snow-filled game at Kansas City, featured the majority of those bad plays. He has to get a tick more careful with the football.

Lock did a good job getting rid of the ball as a rookie, as his sack rate of 3.1% was low for a first-year player who spent the majority of his first season on the sidelines.

Despite his need to test the long ball more frequently, Lock worked the short game impressively in his five contests. According to Sports Info Solutions, 78.3% of his throws at the line of scrimmage and up to nine yards beyond it were on target. Five of his touchdowns came there, and he didn’t throw any picks in that range.

Big-armed quarterbacks typically have problems with the quick game and ball placement on short throws. Neither were a problem for Lock in 2019.

While I don’t want to take too much from Lock’s rookie season because the sample size was relatively small, most of what he showed was encouraging heading into Year 2.

I can’t overstate how vital I believe a strong supporting cast is for a young quarterback — especially in today’s NFL with offenses more WR-dependent than ever — and Lock’s receiver, tight end, and running back contingent has phenomenal upside.

On the surface, again playing in a West Coast Offense may make it difficult for his downfield passing prowess to be fully unlocked; however, the collective speed he has at his disposal indicates Shurmur will dial up more vertical shots for Lock in his second season.

Denver could’ve done a bit more to fortify the offensive line for its young passer. For Lock’s Year 2, Garrett Bolles’ presence worries me at left tackle. Cushenberry has plenty of experience as a pass protector but has to get stronger and deals with balance issues at times. James will be an upgrade over Elijah Wilkinson in 2019, but the latter isn’t a brick wall at the right tackle position.

Altogether, mainly due to his arm strength, quick release, scrambling ability, and the group of playmakers he has in Denver, I’m expecting a sizable leap for Lock in his second season with the Broncos.