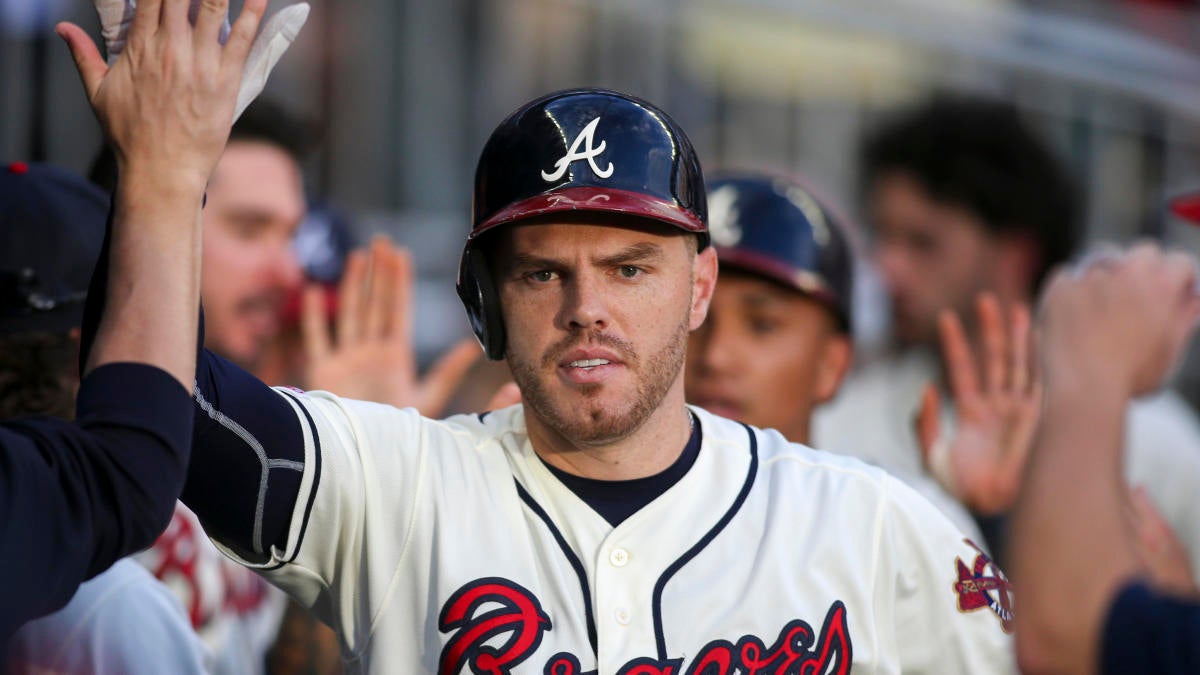 No, that’s not a dirty word. But if you’re still in denial, consider this: Hank Aaron was a compiler. He never hit 50 homers in a season and only topped 45 once, but he hit 755 in his career.
Consider:
It’s reasonable to believe that missing half or all of 2020 costs Freddie Freeman the Hall of Fame one day.
There have only been 20 players in MLB history with 2,500 hits, 500 doubles, 400 homers, 1,500 RBI and 1,500 runs. Here they are:
On a rate basis, he’s an excellent candidate. A career .293/.379/.504 hitter, he’s sitting with a 137 OPS+. He has a Gold Glove and a Silver Slugger. Mid-career, he’s already at 35.7 WAR, which is 58th among first basemen. The average Hall of Fame mark is 66.9, so Freeman is on his way to getting the ballpark there.
Heading to his age-30 season, Freeman has the foundation of the counting stats to get the job done, too. Let’s say he’s exactly halfway done with his career and assume he ages well (he has the profile of doing so and the universal DH will help his longevity).
Does that keep him from 2,500 hits, 500 doubles, 400 homers, 1,500 RBI and/or 1,500 runs? If so, and assuming Freeman doesn’t morph into a “peak” Hall of Fame candidate, is that enough compiling to get him into the Hall of Fame?  Babe Ruth, Barry Bonds, Hank Aaron, Willie Mays, Alex Rodriguez, Stan Musial, Lou Gehrig, Frank Robinson, Albert Pujols, Carl Yastrzemski, Ted Williams, Dave Winfield, Rafael Palmeiro, Ken Griffey Jr., Cal Ripken, Eddie Murray, Chipper Jones, Carlos Beltran, Manny Ramirez and Adrian Beltre.

To be clear, Freeman is currently short of the Hall of Fame. He’s been an excellent player for nine-plus seasons, but he’s only been to four All-Star Games and hasn’t finished higher than fourth in MVP voting. As such, his case a peak performer falls short. That means Freeman’s case rests on his ability to be a compiler.
Does that sound like Hall of Fame company?
That’s where Freeman can make a case for Cooperstown.
In that case, he’s losing around 88 hits, 17 doubles, 19 homers, 60 RBI and 57 runs.
Let’s say Freeman was going to have the exact same season he had last year and chop it in half.  See? Compiling isn’t always bad.
Now, it’ll be a tall order for Freeman to get all the way there. The time lost will be a hindrance as well. SportsLine has Freeman with 119 hits, 25 doubles, 23 homers, 80 RBI and 72 runs this season, but that’s in 111 games. I don’t think we’re getting more than 82 and it might even be less than that.
A few weeks ago, I took a look at 10 current active baseball players who I believe have the most to lose from a canceled 2020 season in terms of their Hall of Fame candidacies. Since we’re still waiting around for baseball to happen, I wanted to take a closer look at Freddie Freeman’s Hall case.