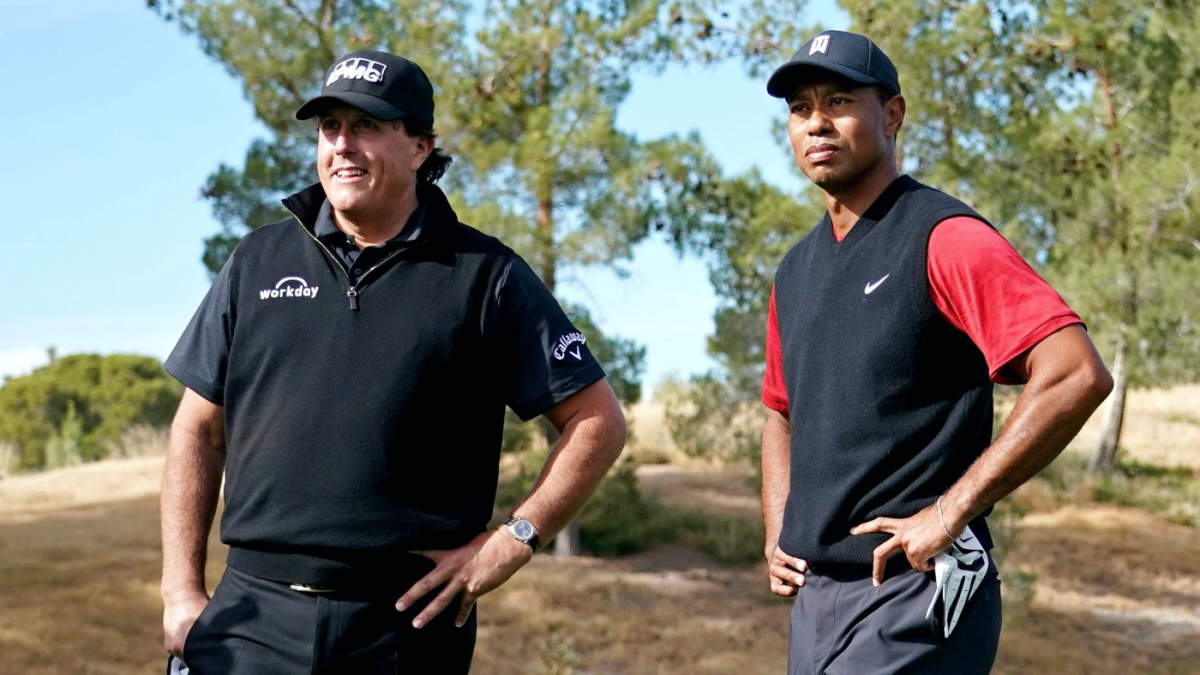 Four legends will tee it up this weekend as Tiger Woods and Peyton Manning team up to face Phil Mickelson and Tom Brady at Medalist Golf Club in The Match: Champions for Charity. The four men will be competing in an 18-hole golf match on Sunday to raise money to help fight the coronavirus pandemic.

Woods and Mickelson are obviously all-time greats on the course, while Manning and Brady — who thrived on a different kind of turf — have golf games that should be able to stand up against the tough test of Medalist beginning at 3 p.m. ET on TNT.

Let’s take a look at what this match means and what Sunday is going to look like as we get live golf for the second Sunday in as many weeks with 28 championships (majors and Super Bowls) represented in this unique foursome.

How ‘The Match’ developed

The Woods-Mickelson match-play event has a (brief) history. The duo squared off in Las Vegas back in November 2018 for $9 million. They never really closed the door on running it back after Mickelson took that iteration (and the cash) in extra holes. The opportunity to play it again and raise some money for charity during this pandemic presented itself, and they took it. Mickelson addressed this recently on the Dan Patrick Show.

“[Producer] Bryan Zuriff and I were the ones who came up with the idea years ago and brought it to CAA and had it developed before we even brought it to Tiger,” said Mickelson. “He has a very creative mind and thought the interaction between two other players was going to be an important part of improving our match. When Tiger and I came down the stretch in Vegas, we clammed up. We didn’t talk. We didn’t communicate. We tightened up.”

That’s part of why Brady and Manning are involved (along with their star power) as caddies will not be present so all mic’d-up interaction will only be between the four golfers (well, two football players and two golfers).

None of the four will walk away with any cash this time, but that doesn’t mean there’s not a lot on the line. WarnerMedia and the golfers will collectively make a charitable donation of $10 million to benefit entities such as Direct Relief, the American Red Cross, Save Small Business and the ALL IN Challenge (an initiative provides food to those in need). More money will be raised during the actual event as viewers donate and will have the ability to enter live raffles featuring experiences with all four men at a later date.

So the $10 million serves as a baseline for how much will be raised on Sunday with even more than that expected when everything is said and done.

The event will be match play, and the front nine will be best ball. Here’s an example of how that works. If Manning, Brady and Woods all make par at No. 1 but Mickelson makes birdie, the Mickelson-Brady team is 1 up. Manning and Brady receive one stroke each on No. 3, No. 6 and No. 8 per their handicaps, and that’s how the front nine will be played.

One wrinkle is a one-club challenge on No. 5 — a par 4 — in which golfers must choose one club to play the entire hole with (including putting!). I’m excited about that because it gives us a genuine look at how skilled players like Woods and Mickelson are when faced with an adversity. In the point-and-shoot world of professional golf, we often don’t get to see the extreme creativity they possess, which a 30-yard chip shot with a 4-iron can disclose.

The back nine is where it gets intriguing. It’s a modified alternate-shot format, which means that everybody tees off but after that you have to alternate. So one golfer’s drive will be chosen, and then the teammates — Brady and Mickelson, for example — will alternate shots until they hole out and move on to the next hole. The quarterbacks will not be teeing off from the same tee boxes as Woods and Mickelson.

Medalist is a monster that has, at various times, ranked among the hardest courses in the country. When architect Bobby Weed renovated the Pete Dye-Greg Norman course, he put in place five “Tiger tees,” which are used by the pros (like Woods) that play it as their home course.

“I can’t wait to go to Tiger’s place and take him down,” Mickelson told Golfweek. “Tiger thinks he has a huge advantage playing there because he was insistent that this event is played on his home course despite everyone else wanting to play it elsewhere. That’s fine. We’ll take it to him and Peyton. There will be no excuses. It’s his home course, but Tom and I are going to go down there and put it to them, and we’ll make it that every time Tiger shows up at his home course, he’ll have a bad memory.”

This makes the track 7,500 yards (although not for Manning and Brady) and an absolute beast coming home. Here’s how tour pro Jamie Lovemark describes the 18th hole.

A really tough finishing hole that has a tee at 520 yards if they choose to use it … there’s a touch of a dogleg right, but the wind will be pumping left to right … there’s also a steep hill down the left side of the fairway … guys will be trying to have it start on that hill and fall to the middle … there’s mostly water to the right with a few small bunkers … a front-left pin could create a lot of action with a slope behind it being usable … back pins aren’t super hard, but the crosswinds make it difficult to get the correct distance, especially with mid-irons, which they may have depending on tee.

There’s a lot going on here, and I love that Barkley and J.T. are involved. Barkley doing anything is amazing, and Thomas will be great on the course with Woods and the other stars. They have a good rapport, and he won’t be afraid to take a few shots if, say, Mickelson can’t find a fairway or Woods is legitimately upset with Manning.

I always go with the underdogs in events like these. Last time we saw Woods, he was spraying shots all over the place at Riviera Country Club en route to a 79 and last-place finish at the Genesis Invitational. And he’s on the team that’s the favorite here. I know his body is far better now than it was then, but it’s probably going to come down to the quarterbacks, and Brady is 11-6 against him. It’s about to be 12-6 after Sunday. Pick: Mickelson and Brady +170