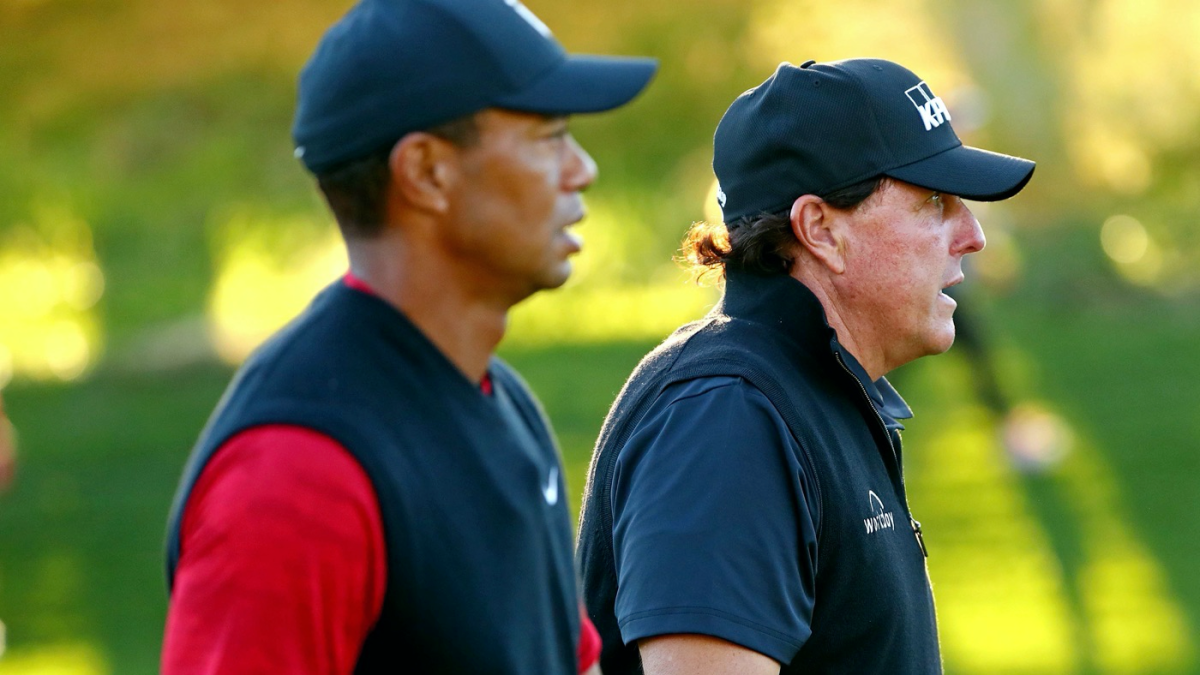 When The Match: Champions for Charity begins on Sunday, four of the best to ever do it — two each in their respective sports of golf and the NFL — will tee off at Medalist Golf Club. Tiger Woods and Phil Mickelson will lead the golf side, of course, while Super Bowl-winning quarterbacks Peyton Manning and Tom Brady bring some football flare.

We know the golf for Manning and Brady could be suspect at the difficult Medalist course, but it’s interesting to see how all four stack up next to each other both on and off the green.

So let’s take a look at this weekend’s tale of the tape as we examine the characteristics of this exciting foursome — featuring Woods and Manning on one team and Mickelson and Brady on the other — ahead of Sunday’s festivities, which begin at 3 p.m. ET. CBS Sports will offer full coverage of the event, so be sure to check back with us all week and again on Sunday.

This is a good place to start given how difficult Medalist plays and the fact that each quarterback will be getting three strokes on the front nine (the back nine is alternate shot). For Woods and Mickelson, I listed their ranking on the PGA Tour this year in strokes gained, neither of which are quite good (although Woods has seen limited action). Both are still likely in the +6 or +8 range (the opposite of Brady and Manning).

There are some questions (big questions!) over whether Brady has sandbagged his scores to artificially inflate his handicap, but given how little time he has to play compare to Manning, those numbers don’t seem that far off from reality. One problem: Medalist is a monster, and both quarterback could be in all kinds of trouble come Sunday afternoon (especially on the back nine in alternate shot).

We know Manning struggled toward the end of his career and that Brady has not necessarily kept up with his former self, though he can still sling it. Though we do not have footage of Big Cat tossing around the pigskin, we do know that Lefty — throwing righty — has an absolute cannon!

The footage we have of Tiger is tossing a baseball with Roger Clemens back in 2016. That arm is nothing to sneeze at, though there is a bit of a sidearm delivery.

We’re grading these on a curve, of course, because neither Woods nor Mickelson have anywhere near the arm of Brady or Manning. Need evidence? How about this recent story from Lefty about the time he and Brady played catch in the Augusta National Golf Club parking lot when he was worried that he’d get a finger broken ahead of the Masters.

I’ve always liked Mickelson’s swing from the other side, and while Tiger’s current swing is not my favorite version ever, it’s still pretty sweet. As for the football guys, Brady — this should not be surprising given their style in football — looks a lot better doing it than Manning.

I was going to try and list the best win here but figured it would be nearly impossible to narrow it down for each player. If you were going to, it might look like 1997 Masters for Woods, 2013 Open for Mickelson, 2017 Super Bowl for Brady and 2007 Super Bowl for Manning. Regardless, Woods and Manning have a big 17-11 advantage here with Brady actually usurping Mickelson even with 25& as many opportunities every year.

Mickelson thinks he’s at the top here, but Manning is easily the best guy. The primary reason he takes the top slot is because he’s not afraid to go after Brady in a way that Mickelson is definitely afraid to go after Woods. Brady kind of just sits there and smiles, while Woods thinks things are funny that are not actually funny and vice versa. Regardless, I hope we get more jawing than at the first match Woods and Mickelson played.

“Tiger and I clamped up the first time,” Mickelson told Golfweek. “That won’t happen again. I think having Peyton there will be a big part of it because he gives me and Tom somebody to rough up. Peyton, when he comes back at you, he does it in a funny way that elicits a laughter from you as opposed to a defensive response. And I think that’s why he’s so funny, because even the person he is cutting up finds it funny and doesn’t take it personal. And that will allow us to free it up and do it a little bit more.”