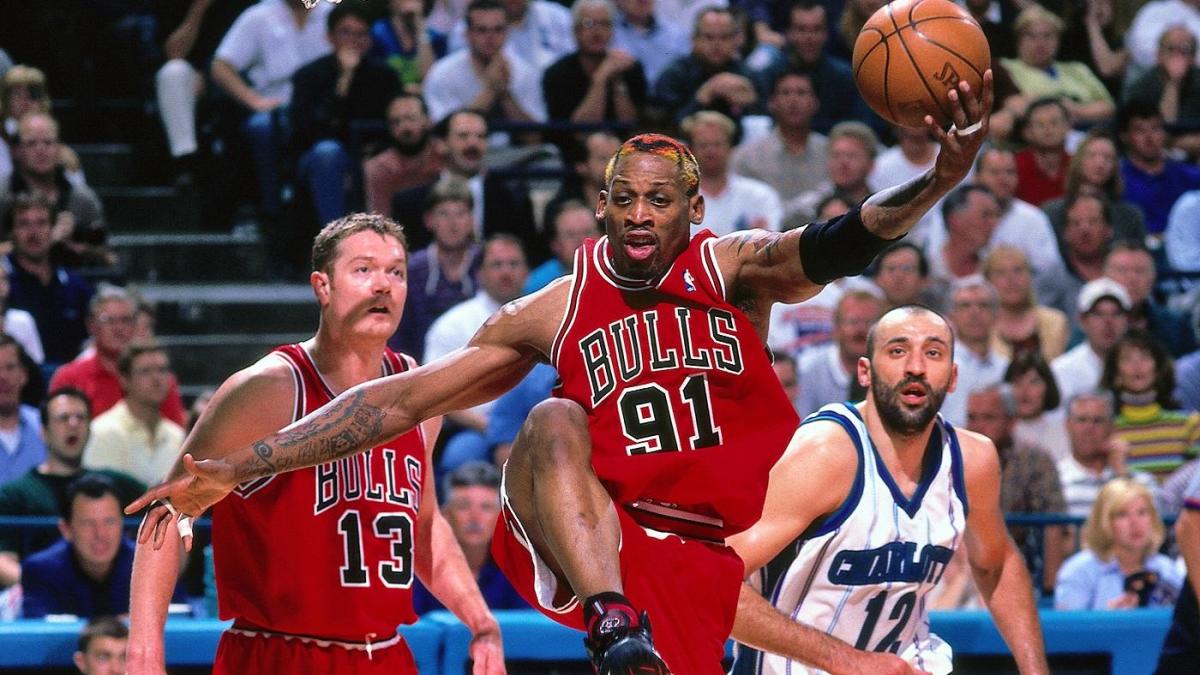 Dennis Rodman had a colorful career. By the time he retired from the NBA in 2000, he was arguably known as much for his antics off of the floor — the loud hair, the partying, and, of course, the wedding dress — as he was for his on-court contributions, which were vast. Some of the most memorable moments from Rodman’s career came during the years he suited up alongside Michael Jordan and Scottie Pippen as a member of the Chicago Bulls. Rodman only played with them for three years, but to say that his time as a Bull was eventful would be an understatement. With that said, here’s a timeline of his memorable stint in Chicago.

Rodman’s two-season stint with the San Antonio Spurs officially came to an end on Oct. 3, 1995 when he was traded to the Bulls in exchange for veteran center Will Perdue (Rodman recently said that the Spurs traded him for “nobody“).

Rodman was productive during his time in San Antonio. That wasn’t an issue as he led the league in rebounds per game during both of his seasons with the Spurs. Off the court, though, there was a plethora of issues. One in particular was Rodman consistently locking horns with the organization. Rick Gano of the Washington Post provided an apt summary of Rodman’s ongoing issues in San Antonio on the day that he was moved to Chicago:

But the 34-year-old forward, who is partial to multicolored hairdos, assorted body piercings and late-night soirees, proved a constant irritant to the Spurs’ front office… Rodman was suspended during the season for insubordination and often missed practice, his whereabouts unknown. During games he would spurn team huddles and remove his basketball shoes while on the bench… In acquiring Perdue, a 30-year-old part-time center and marginal player, San Antonio made it all too clear it was simply intent on unloading Rodman.

So it was under unusual circumstances that Rodman arrived in Chicago. The Bulls obviously did their due diligence prior to the acquisition, and the move was approved by head coach Phil Jackson, along with Michael Jordan and Scottie Pippen before it was made. Rodman even had to apologize to Pippen for a previous transgression before he was added to the roster.

Adding Rodman was the ultimate risk vs. reward move for the Bulls. If things went well, Rodman could provide Chicago with some much-needed rebounding while it chased more championships. However, if the situation went south, the possibility of Rodman becoming a locker room cancer was one that the front office had to consider. In hindsight, it seems pretty safe to say that the gamble of signing Rodman paid off.

It didn’t take long for Rodman’s addition to start paying dividends on the court for Chicago. “The Worm” totaled 20-plus rebounds three times during his first six games with the Bulls, and he recorded his first — and only — career triple-double against the Philadelphia 76ers on Jan. 16, 1996. He finished the game with 10 points, 21 rebounds and 10 assists and helped lead the Bulls to a double-digit win while showing just how valuable he could be in the process.

Rodman’s first major transgression as a member of the Bulls came on March 16, 1996. On this day, Rodman was ejected from a game against the then-New Jersey Nets in the first quarter after getting hit with two technical fouls . Rodman was assessed his first technical for slamming the ball onto the floor. The second one came as Rodman protested a foul that was called against him while fighting for a rebound.

Rodman clearly wasn’t happy with the ejection, and while expressing his dissatisfaction to referee Ted Bernhardt, his head made contact with Bernhardt’s. Rodman then proceeded to rip off his jersey and shove over the sideline Gatorade cooler while continuing to berate the referees on his way to the locker room. It was quite the scene, which you can see below:

Rodman was ultimately suspended for six games and fined $203,926. While he would eventually put the situation behind him, Rodman certainly didn’t help his already-muddied reputation with the incident.

Sure, there were some bumps along the way, but on June 16, 1996, Rodman did exactly what he was brought to Chicago for: to help the Bulls win their fourth NBA title. The championship was the Bulls’ first since Jordan returned from his stint as a baseball player. It would turn out to be the first of three in a row. In the closeout game of the ’96 Finals against the Seattle Supersonics, Rodman had 19 rebounds (11 offensive), nine points, five assists, three steals and one block, and his consistent energy helped propel the Bulls to victory.

“As you evaluate the series, Dennis Rodman won two basketball games,” Sonics head coach George Karl said after Game 6, via NBA.com. “We controlled Dennis Rodman for four games. But Game 2 and tonight, he was the reason they were successful.”

At the time, Rodman said that the series against Seattle was an opportunity for him to prove his doubters wrong — an opportunity that he capitalized on.

“It makes the game of basketball worthwhile for me,” Rodman said of his impact on the series against the Sonics at the time. “The last four years have pretty much been hell for me. It’s been a transition. People have said I’m disruptive, I’m this, I’m that. I came back and proved everybody wrong.”

After winning his first title with the Bulls, Rodman didn’t wait for the following season to make more headlines. In a move that garnered international media attention and became one of his most memorable publicity stunts, Rodman wore a full wedding dress and veil to a book signing in Manhattan while promoting his autobiography, Bad As I Wanna Be. Rodman really went all out and even arrived to the event in a horse-drawn carriage. According to Rodman, the idea was partially inspired by Steven Tyler of Aerosmith.

“After I thought of that idea, I came to the hotel and was riding a stationary bike in the gym,” Rodman said in 2019, via USA Today. “And I looked to my left, and there was [Aerosmith’s] Steven Tyler on the bike next to me. I said ‘Steven, what do you think about this idea?’ I’m thinking about wearing a wedding dress to my book signing.’ And he flipped out. He was like, ‘That’s awesome. That’s great.’ I never knew wearing a wedding dress on Fifth Avenue was going to make that impact. We shocked the world.”

Rodman may have silenced some of his critics by helping the Bulls win the title in ’96, but the ring didn’t stop him from making headlines for the wrong reasons. On January 15, 1997 during a game against the Minnesota Timberwolves, Rodman let his temper get the best of him. After he tripped over cameraman Eugene Amos along the baseline after battling for a rebound, Rodman reacted by kicking Amos in the groin area. It was an ugly scene, which you can see below:

The mistake was an expensive one for Rodman, who ultimately paid Amos $200,000 in a settlement. He was also fined $25,000 by the NBA and suspended for 11 games without pay. Overall, the incident cost Rodman north of a million dollars, and served as another blemish on his resume.

Whatever distrations Rodman was responsible for certainly didn’t slow Chicago’s success. For the second June in a row the Bulls found themselves hoisting the Larry O’Brien Trophy when all was said and done, and Rodman was again a major contributor. He grabbed 11 rebounds in the closeout game and made things difficult for Jazz All-Star forward Karl Malone throughout the series.

Rodman’s best rebounding game in a Bulls jersey came on Dec. 27, 1997 against the Atlanta Hawks. Over the course of the contest Rodman snagged 29 rebounds — a United Center record. And while Rodman was dominating the glass, Jordan was dominating the defense to the tune of 47 points. Together, Jordan and Rodman propelled the Bulls to a 97-90 victory.

Rodman’s last game with the Bulls came on June 14, 1998 in Game 6 of the 1998 Finals against the Jazz. Rodman had been fined by the Bulls earlier in the series for missing practice in order to attend a WWE (formerly WWF) event, but ultimately he was out there when the Bulls needed him, as he tallied seven points and eight rebounds in the closeout game against the Jazz. The victory provided Rodman with his fifth — and final — championship ring, and ultimately proved to be the final playoff game that he would play in.

Rodman’s run in Chicago came to an end on Jan. 21, 1999 when he was released by the Bulls, as the team was in the midst of a complete overhaul at the behest of general manager Jerry Krause. Jordan and Jackson were also both gone, and Pippen had just been traded to the Houston Rockets. Rodman was the last to go, and he was released before the 1998-99 season started due to a lockout. In his three seasons in Chicago, Rodman won three titles and in turn played a major role in one the greatest dynasties in league history.