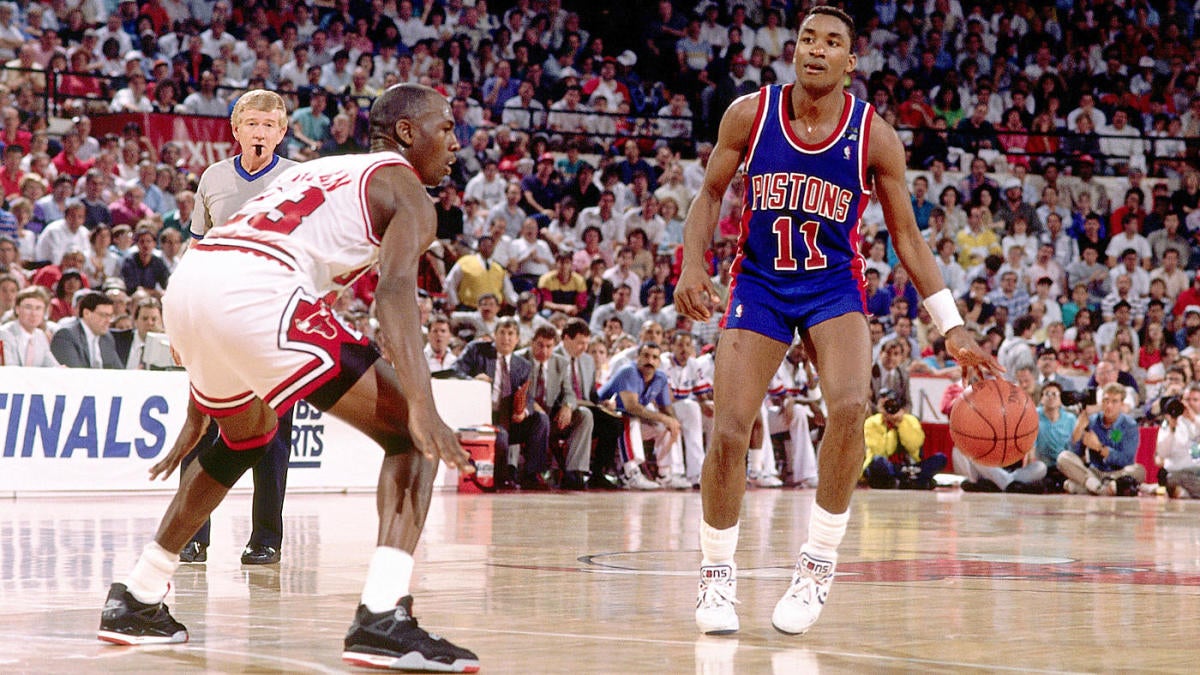 When we think of Michael Jordan, playoff success and championships come to mind. Yet that wasn’t the case for his whole career. Jordan entered the league in 1984 but didn’t make the Finals until 1991, and that’s largely because they ran into the Detroit Pistons in four consecutive postseasons.

The “Bad Boy” Pistons were known for their physical play, which they took to new extremes against Jordan in the playoffs. As you can imagine, this led to countless altercations, fights and technical fouls, as the Chicago Bulls kept knocking at the door of Eastern Conference supremacy and were continually rebuffed by Detroit.

The history between Jordan’s Bulls and the Pistons goes back to the early days of Jordan’s career, and has even continued to this day. Recently, Pistons legend Isiah Thomas took a not-so-veiled shot at Jordan, saying he wouldn’t necessarily be the greatest player ever if LeBron James and Kevin Durant had played during his era.

While it will likely never end, here’s a look at the timeline of how the bad blood formed between Michael Jordan’s Bulls and the “Bad Boy” Pistons.

In the second game of his second NBA season, Jordan receives a hard foul from Pistons center Bill Laimbeer on a layup attempt, leading to an altercation between Bulls coach Stan Albeck and Pistons coach Chuck Daly, who were both ejected from the game. With the Pistons already having left the court, Jordan sinks his final free throw of the game left-handed to give the Bulls a 121-118 win. Jordan finishes with 33 points on 9-for-24 field goals and 15-of-16 free throws.

“Nobody’s ever really unstoppable, but I felt close to it tonight,” Jordan said after the game.

The point total set a new Bulls franchise record, while Thomas had 31 points and 18 assists in the loss.

Pistons big man Rick Mahorn commits a hard foul on Jordan in the third quarter of a January game, prompting an altercation between Mahorn and Bulls forward Charles Oakley which eventually leads to a bench-clearing brawl with plenty of punches thrown.

Mahorn and Oakley are both ejected and later fined. Jordan finishes with a triple-double of 36 points, 10 rebounds and 10 assists in a 115-99 Bulls win.

“I think my teammates really cared about the way I was being treated,” Jordan said afterward. “Charles Oakley is a very caring person. I’m very grateful he came over and tried to take up for me.”

“If it didn’t get through to them, it will if they ever do it again,” Oakley said. “If they do something wrong, they’re going to get checked. No matter what player they mess with, somebody will retaliate. In Detroit earlier this year, Bill Laimbeer hit Scottie [Pippen]. I ran out and told him the next time it happens, something is going down. After the incident [Saturday], I knew something was going to happen. The fine will get paid and then it will be forgotten. But, you’ve got to protect yourself at all times.”

In preparation for the first postseason meeting against Jordan, who had a 59-point game against them just a month earlier, Pistons coach Chuck Daly devises a defensive game plan that would later famously be named “The Jordan Rules.” The scheme includes limiting Jordan’s easy shots, varying defensive looks and being extremely physical.

“The other rule was, any time he went by you, you had to nail him. If he was coming off a screen, nail him. We didn’t want to be dirty — I know some people thought we were — but we had to make contact and be very physical.”

Early in the first quarter of a pivotal Game 3 of the 1988 Eastern Conference semifinals Jordan tries to fight through a Laimbeer screen and the two exchange shoves before Jordan appears to throw a couple of punches.

Jordan receives a technical foul and remains in the game, while Laimbeer is called for an offensive foul. The Bulls go on to lose, 101-79, giving the Pistons a 2-1 series lead. Jordan scores 24 points on 8-of-20 shooting, with five turnovers compared to three assists.

On the heels of Jordan’s first regular season MVP award, the Bulls are eliminated in the Eastern Conference semifinals by the Pistons, 4-1. After scoring 36 points to help the Bulls steal Game 2 in Detroit, Jordan averaged under 25 points in the final three games of the series, all Pistons wins. Detroit eventually loses to the Lakers in seven games in the NBA Finals.

In one of the most physical playoff matchups in NBA history, the Pistons defeat the Bulls, 4-2, in the Eastern Conference finals.

Jordan averages 29.7 points per game for the series, including 46 in a Game 3 win, but makes just 5-of-12 free throws in the Pistons’ 103-94 series-clinching win in Game 6 in Chicago. Jordan averaged over 13 free throw attempts per game in the conference finals. The Pistons go on to sweep the Lakers in the Finals for their first NBA championship.

With the Jordan Rules in full swing, the Pistons once again get extremely physical with Jordan as the Detroit beats the Bulls in seven games in the Eastern Conference finals.

Despite the defensive focus on him, Jordan finishes the series with averages of 32.1 points, 7.1 rebounds and 6.3 assists on 47 percent shooting. He scored 31 of his team’s 74 points in the deciding seventh game.

In their fourth straight postseason meeting, the Bulls finally clinch their first NBA Finals appearance by sweeping the Pistons, winning each game by at least eight points. Some of the Pistons, particularly Thomas and Laimbeer, draw significant criticism for leaving the court with 7.9 seconds left in the clinching Game 4 without shaking the Bulls’ hands.

“In terms of walking off the court, we don’t really make any apologies for that because we were beat,” Thomas said the following November. “They beat us soundly. At that time, we were mad, we were upset. For me to sit here now and say we didn’t really mean it, that would be a lie, because at that time we meant it. Was it unsportsmanlike? Yes. Was it the wrong thing to do? Yes. But at the time, is that the way we felt? Yeah, it was a very emotional response. For me to sit here and say now that we really didn’t mean it, we didn’t feel that way, that would be a lie.”

The loss officially marked the end of the “Bad Boy” Pistons, as they fell in the first round the following season and didn’t make the playoffs again until 1995-96. The Bulls went on to win their first of three straight NBA titles with a 4-1 series win over the Lakers in the Finals.