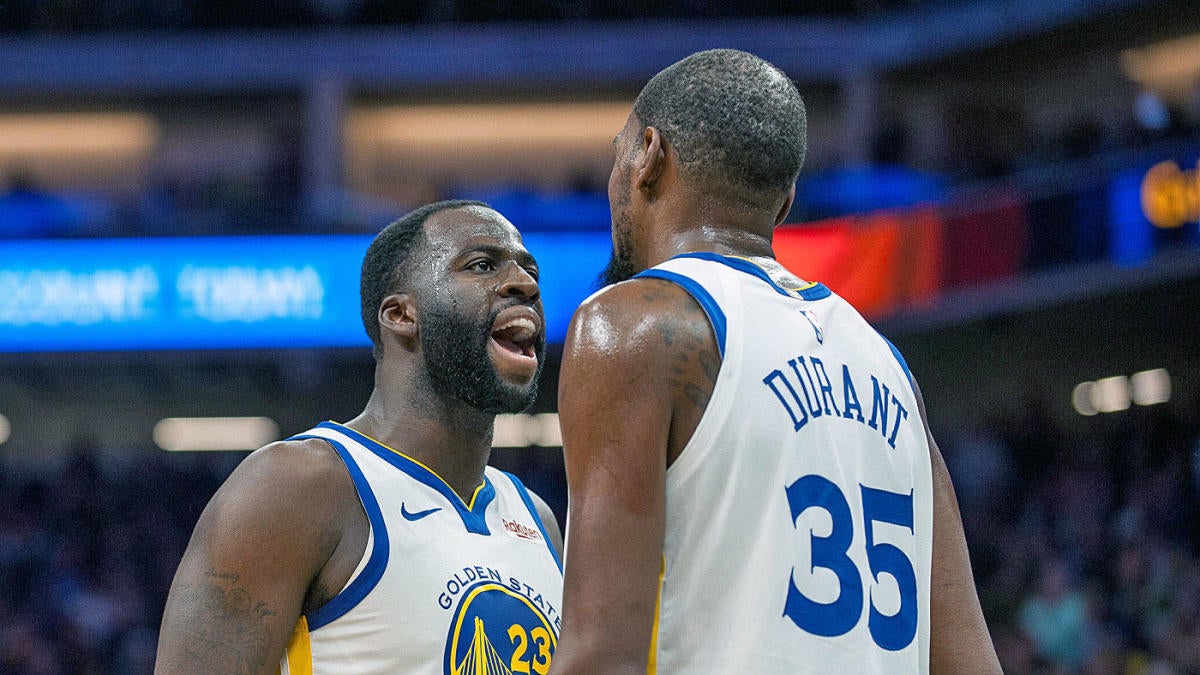 If you thought Draymond Green had said his piece about the way Kevin Durant left the Warriors and was done talking about him, you were wrong. If you thought the almost holy figure that is Michael Jordan might be the one person Green might actually hesitate to criticize, you also thought wrong.

You ask Draymond a question, you’re going to get an honest answer.

Which brings us to Monday, when Green appeared on Uninterrupted’s “WRTS: The After Party” and proceeded to sound off on Durant for the way he handled his final season with the Warriors and Jordan for not supporting Scottie Pippen enough when he was getting stiffed financially by Bulls management.

The context is important. After Episode 2 of “The Last Dance” — ESPN’s 10-part series chronicling the 1997-98 Bulls — focused heavily on Pippen’s laughably low contract, which ultimately led to a nasty falling out with GM Jerry Krause and Pippen asking to be traded, Green was comparing the distractions those Bulls were dealing with as it pertained to Pippen’s situation with what the Warriors dealt with during Durant’s final season with the organization.

The Bulls, as the documentary has detailed, knew 1997-98 was going to be their last season together. Krause had made that clear, saying coach Phil Jackson would not be back the following season even if the team went “82-0.” Being that Jordan had also made it clear he wouldn’t play for another coach, and Pippen was set to become an unrestricted free agent, the writing was on the wall.

The Warriors were different. Durant was a free agent, but nobody came out and said “this is it.” So the questions and uncertainty lingered all season, not just for Durant, but for everyone in the organization. Draymond has complained about this before, Durant leaving his teammates in the dark; it was at the heart of his infamous mid-game spat with Durant that Durant admitted contributed to his leaving. Draymond expressed regret about the way he handled that situation, but that doesn’t mean he still doesn’t feel the same way, as Monday’s interview confirmed.

“…what should have happened was [for] Kevin [to] come out and say, ‘hey, like, this is it, so let’s do this.’ Or ‘This isn’t it,’ you know what I’m saying,” Green said. “But you can’t just leave the elephant in the room, because what happened is the question came to us every day. Every time we spoke to the media, Klay [Thompson] and myself was asked about our contracts and it was strictly due to Kevin, because while that was going on, Klay was saying, ‘I want to be a Warrior forever. Like, I want to be here, we started this thing. This is where I want to be.’ I’m saying I want to be here for my career, we started this, we built this, I want to finish my career here with the guys I started it with.

“And then you kind of had Kevin [saying], ‘I don’t know what I’m going to do next year’ and it don’t matter, but it does [matter] because you’re not the only person that has to answer that question. And to be quite frank with you, you’re honestly the last person that has to answer that question because you don’t really say s–t, you don’t say much to the media, if anything, you tell them to ‘Shut the f–k up.’ Well, I don’t tell them to ‘Shut the f–k up.’ I kind of have a conversation. So I’m stuck answering that question all the time. And due to that, there was always an elephant in the room amongst us as opposed to [the Bulls]. They didn’t have that elephant.”

So here’s the deal: Draymond can be upset with Durant not committing to either staying or leaving, but he didn’t want to stay, and if he would’ve come out and said “I’m leaving after this year” that would’ve compromised his market leverage and created a whole new kind of PR storm for the Warriors to navigate. Had Durant wanted to stay, sure, he could’ve just said that and eliminated the rumors. But knowing he was probably going to leave was not something he could just come out and say.

This is just part of the deal with superstars. The Cavs didn’t know whether LeBron James was going to stay in 2010, and the Heat didn’t know whether he was going to stay in 2014. They just played through it and hoped for the best. That’s what pros do. And besides that, wasn’t it Green who was recruiting Durant to sign with the Warriors as an unrestricted free agent in 2016? Indeed it was. In other words, Green was cool with Durant keeping his Oklahoma City teammates in the dark so he could defect to Golden State, but when the coin got flipped, so too did Draymond’s stance.

It’s not that Green doesn’t have a point about what the uncertainty did to Golden State’s locker room. He was in there. Only he and his teammates really know the truth. Still, that’s just the way the NBA works. You can’t come out and say you’re leaving a team that is trying to win a title simply for clarity. There are a lot more layers to that situation.

As for Green’s Jordan criticism, let’s also start with the context. Pippen wanted a new contract after the Bulls’ fifth championship, and when he realized that wasn’t happening, he postponed the toe surgery he needed to “enjoy” his summer rather than doing it right away so he could be back in time for the start of the season, meaning Jordan was having to play without his copilot for the first few months.

Bear in mind, Jordan was making $33.1 million in 1997. Pippen was making $2.75 million. Green’s criticism of Jordan stems from the fact that Jordan, to this day, says Pippen handled that situation wrong when he knew full well Pippen was getting stiffed. To Green’s point, Jordan went on the documentary and admitted he needed Pippen to win championships and called him his best teammate ever, but when it was time for the most powerful voice in the basketball world to assert Pippen’s value and at least act like he was on his side, he left Pippen on his own.

“And so I was kind of a little disappointed when Mike, still to this day, is like ‘Scottie was wrong.’ Like, no. You roll with your dogs, because they ride with you. … [Mike’s] making 36 million dollars, and [Pippen’s] making two [million], yet you’re saying when you mention [Michael Jordan’s] name there’s no way you can not mention Scottie Pippen’s name? And he’s just supposed to sit there? That don’t make sense. It’s very easy to say, like, ‘no, you should be good’ [when] your house is huge, you got 36 million dollars coming in, and this man got two [million]. That’s crazy.”

This criticism is a little tougher to argue with. Jordan could’ve stood up for Pippen. But Jordan wanted to win, and understand that Pippen being on such a cheap deal allowed the Bulls to go out and sign championship-caliber role players. Reasonable minds can disagree on this one, but it’s easier to understand Green’t point on this one than it is with the Durant criticism.

You can watch Green’s whole interview below. If you want to listen to the Jordan/Pippen comments, they begin around the 27-minute mark.