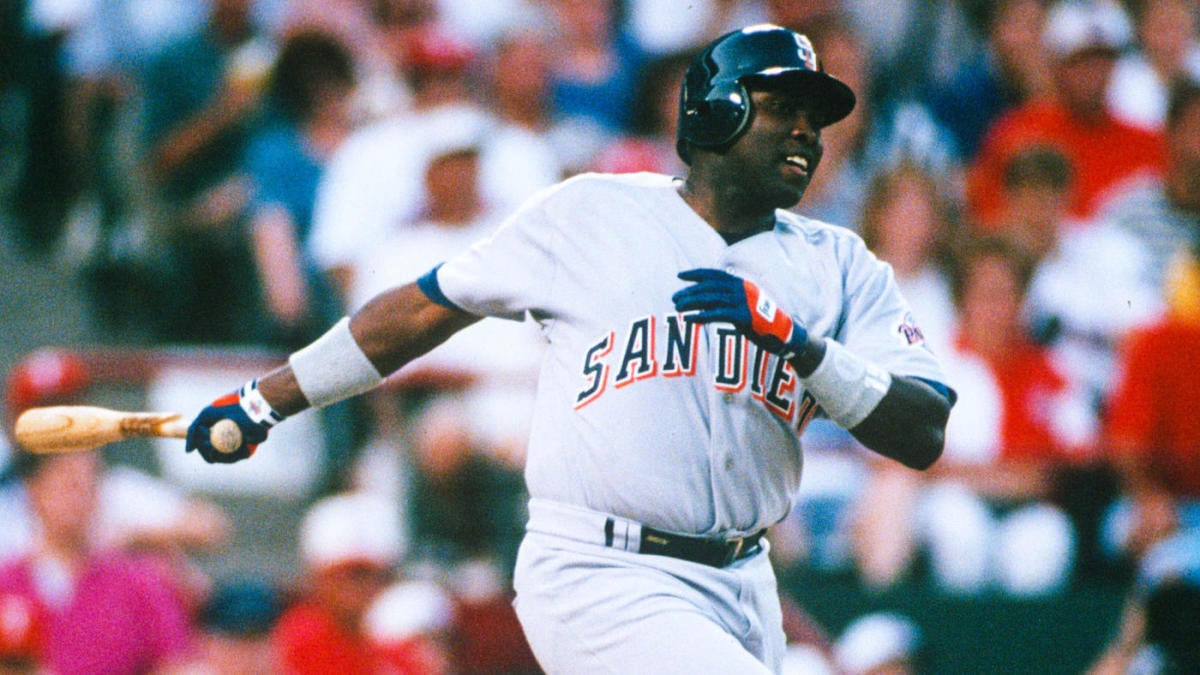 Jake Peavy is second in WAR and wins, the franchise leader in strikeouts and sits fourth in innings pitched. He won two ERA titles with the Padres and the 2007 Cy Young. That’s a pretty easy place to start.
Baseball Stars uses six characters for each name. What follows is the Baseball Stars lineup.
Fred McGriff was stellar, but only around for just over 2 1/2 seasons. Ryan Klesko was an All-Star in 2001 as a full-time first baseman and spent seven seasons with the Padres in all. His first three years there were pretty great with the stick, too, driving home 300 with a 144 OPS+. Jack Clark and Nate Colbert also deserve mention, but I’m going Adrian Gonzalez here.

This is where Ozzie Smith got his start and while he was obviously a sparkling defender in San Diego, his offense was atrocious. While Smith hit .272 with a .350 OBP in St. Louis (more than serviceable with his defense and stolen bases), in San Diego he slashed a pitiful .232/.295/.278 in four seasons. We’ll look elsewhere.

SP: Peavy, Hurst, Benes, Ashby
RP: Trevor
Perhaps one day we have the easy and obvious pick of Fernando Tatis? A half season isn’t getting us there, though.

Up next is the San Diego Padres. Let’s get to the lineup.

Greg Vaughn was only in San Diego for two seasons, though one was outstanding and that was the aforementioned 1998 pennant winner. There were good seasons all over the outfield from Cito Gaston, Steve Finley, Kevin McReynolds, Gene Richards and Mark Kotsay.
Garry Templeton went back to the Padres in the Smith trade and held down the spot for a decade but he didn’t provide much more offense either.
Well, there’s Heath Bell, Gossage, Rollie Fingers and … In leaning on era-adjusted run prevention along with workload, I’ve narrowed down the last three spots to Andy Benes, Andy Ashby, Bruce Hurst and Dave Dravecky.

As a (hopefully?) fun twist, I’m making a Baseball Stars team for each. That’s right, the old-school Nintendo video game “Baseball Stars,” which I still consider to be the best baseball video game ever. It allowed you to create teams and I used to make all-time lineups for prominent MLB franchises. There are the eight position players with four starting pitchers, one reliever and five bench position players on each Baseball Stars squads.
In an effort to avoid going stir crazy with MLB and every other major sports league shut down during the coronavirus pandemic, I’ve decided to take a look at the best of the best for each baseball franchise. We’ve created a 30-day series making an all-time team for each MLB club. We’re breaking down one team each day throughout April, continuing today in the NL West. Hurst is my first pick of the bunch. He was a workhorse from 1989-92, averaging 227 innings pitched per season with 29 complete games and 10 shutouts with a 3.22 ERA.

Mr. Padre, Tony Gwynn played in 157 games in center field, so we need him here. How to best illustrate the best player in franchise history? There are three players in Padres position player history with 20-plus WAR.

Utility man Bip Roberts might come into play at some point on this list, but it’s between Mark Loretta and Hall of Famer Roberto Alomar. Does that sound weird? Admittedly, it does. Of course, Loretta hit .314/.377/.438 (121 OPS+) in his three seasons with the Padres. In his three seasons, Alomar hit .283/.339/.379 (103 OPS+). Alomar was a better defender and obviously stole a lot more bases, but he also wasn’t yet the Hall of Fame version of Robbie Alomar. He was traded after his age-22 season. For me, sticking with the Padres version of each player says picking Loretta is the call.

What I’ve ultimately decided is to use Dave Winfield here. His Hall of Fame career started with eight years in San Diego and he did spend some time in left.

I’m gonna go with Brian Giles. He was there longer, was more consistent and it feels like he got a raw deal with his power getting zapped in the move to Petco Park.  Trevor Hoffman. Next.
Here’s the thing, though: The top three outfielders in club history were right fielders and if we wanted to bump Nevin out here (he’s seventh in career WAR among Padres position players), he’s only played right field.
In five seasons with the Padres, Gonzalez developed into an All-Star and he finished fourth in MVP voting in 2010. By the time he was traded, he was one of the most fearsome hitters in baseball.
I’m left with Khalil Greene and the hope that Tatis takes this and runs with it.

If we were talking about a fight for second place, Terry Kennedy and Benito Santiago would be duking it out. Gene Tenace sits at the top alone, though. An excellent defender behind the plate, Tenace was ahead of his time. I’ve mentioned this before with players like Bobby Grich and Ron Santo and it applies here again. The easiest way to find a player who was, in hindsight, an underrated hitter is to find a guy who didn’t run high averages but walked a lot. Tenace hit .237 in his time with the Padres, but he averaged 106 walks per season (against 97 strikeouts) in his four years with the Padres. Team the exceptional .403 OBP for a catcher along with his power and he had a 136 OPS+ in San Diego. Tenace actually ranks fourth in position player WAR in Padres history.
Now we’re talking. Phil Nevin had some big years and Chase Headley’s eight-plus years gave us an exceptional 2012 season in which he finished fifth in NL MVP voting despite playing for a 76-win team. Headley is a very tough omission and actually leads in WAR among third basemen as Padres. I’m going with 1996 MVP Ken Caminiti. He only spent four seasons with the Padres, but he hit .295/.384/.540 (147 OPS+) with 127 doubles, 121 homers and 396 RBI. He also had a big NLCS in 1998 as the cleanup hitter when the Padres took home their second pennant.

I’ll go Benes and Ashby for the last two spots. Dravecky had lots of value on the 1984 pennant winner, but a huge chunk of that was in relief. In fact, both Dravecky and Craig Lefferts were amazing in front of Goose Gossage in 1984 and deserve mention.

Kevin Brown finished third in Cy Young voting in 1998 and was their postseason ace en route to a pennant, but it was only one year. Let’s put a pin in this one for now.
Bow down to Mr. Gwynn.